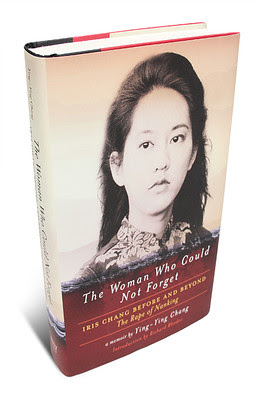 Remembering the author of 'The Rape of Nanking.'

Iris Chang, born March 28, 1968, was raised like many other children of her generation. Her parents relied on Dr. Spock for child-rearing advice, encouraged a love of reading, made sure that she spent time with her grandparents, and provided a loving home for her and her brother, Michael. One photograph shows the family on a trip to Yellowstone National Park, all grins, as a geyser blows behind them. Iris went on to marry and have a son. She became a writer and in 1997 published the book that made her famous, "The Rape of Nanking," about the atrocities committed in that city by Japanese soldiers during World War II. Then, in 2004, at the age of 36, she committed suicide with a handgun.

Iris's sudden death was the catalyst for "The Woman Who Could Not Forget," a biographical memoir written by her mother, Ying-Ying Chang, who says she had to set the record straight and "present Iris" as "only we, her family, knew her." But the book is less a tale of a renowned author's vertiginous spiral into depression than it is a mother's poignant tribute to a Chinese-American girl who achieved success through her own intelligence, hard work and grit, but also with the extraordinary support of those closest to her.

In her parents, Iris had excellent role models. Ying-Ying was born in China in 1940, and her childhood was "full of fears, worries, pains, and frights," as her parents struggled to keep her and her brother safe while the country collapsed into civil war. Her family emigrated to Taiwan, and Ying-Ying eventually made her way to America and married a fellow Harvard Ph.D. student, Shau-Jin (a tale she doesn't relate in the book). The two were doing postdoctoral work at Princeton University—Ying-Ying in biological chemistry, Shau-Jin in physics—when Iris was born.

A year after Iris's birth, the family moved to the Midwest, where Ying-Ying and Shau-Jin began teaching at the University of Illinois in Urbana-Champaign. As her mother tells it, Iris was a "sensitive" child who was "shy" in public but "very talkative and often dominated the entire conversation" at home. On trips to the local library, she would check out "at least ten books at a time." She took up piano and started winning writing competitions. "She had a tendency to obsess over the things she was interested in or working on," Ying-Ying recalls. In high school, Iris took a liking to computers, volunteered at the local hospital and started her own magazine. She was accepted to several universities, including Cornell and the University of Chicago, but her parents advised her to go to the University of Illinois instead, because "to be home might be better for her." She complied.

That decision is one of the few instances in the book where her parents seemed to have much sway over Iris, although the strong bond between mother and daughter is clear in the myriad of warm correspondences Ying-Ying cites in the book. "She always initiated things by herself," Ying-Ying writes—a trait that the family supported and even reveled in. The Changs encouraged Iris to develop marketable skills and not to rely on anyone else to support her financially, although she married her college sweetheart in her early 20s. Ying-Ying reminded her: "As my mother used to say to me, the success in one's life was dependent on 70% hard work and only 30% talent or genetic makeup."

And Iris worked. She interned at Newsweek and freelanced for the New York Times but had trouble getting a job in the run-up to college graduation. She took an internship with the Associated Press but soon left to take another one at the Chicago Tribune—and then the newspaper declined to hire her full-time. With her parents' support, Iris returned briefly to the University of Illinois before winning an assistantship in John Hopkins's writing program.

An adviser there encouraged her to get in touch with Susan Rabiner, a HarperCollins book editor, who would give Iris her first book topic, a biography of Tsien Hsue-sen, the father of China's missile and space program. But the book advance was modest, and for a while Iris delivered pizzas to make ends meet.

"The Rape of Nanking" had its genesis in the tales her parents told her of her maternal grandparents, who barely escaped the Japanese onslaught in 1937. Iris attended a 1994 conference on this "most atrocious chapter in history," Ying-Ying says, and realized that there wasn't a good English-language book on the subject. Iris holed up at the National Archives in Washington, trawled through Yale's library and traveled to China to interview survivors. She discovered an eyewitness's diary—a German Nazi, John Rabe—that added significantly to the historical record of the slaughter. All the while, Ying-Ying and Shau-Jin helped her with translations and, once Iris began writing, "gave up our nights and weekends to read her manuscript."

The book was a remarkable success for such a harrowing subject, and Iris soon got to work on another project, "The Chinese in America," which was published in 2003. The young author was in demand for television interviews, bookstore appearances and speaking engagements. It was on one of her trips that Iris had a breakdown, in a Kentucky hotel, was hospitalized and diagnosed with, as Ying-Ying describes it, "'brief reactive psychosis,' due to stress conditions such as lack of sleep and food."

Ying-Ying attributes her daughter's slide into depression to side effects from antipsychotic and antidepressant drugs and poor medical advice. A few months after her breakdown, Iris Chang was dead. Her mother devotes only a few chapters to this period of illness and despair. Perhaps that's best. "The Woman Who Could Not Forget" ultimately isn't a sad story, but rather a celebration of Iris's remarkable life.

Ms. Kissel is a member of the Journal's editorial board.
Posted by Paulo Roberto de Almeida at 10:01