Nervous on the NileMinorities Fear End of Secularism in Egypt

By Daniel Steinvorth and Volkhard Windfuhr

REUTERS
When he took office as Egypt's new president in June, Mohammed Morsi pledged to follow a pluralist policy that respected the rights of women and non-Muslim minorities. But everything he has done since then indicates that he intends to replace the secularist dictatorship of his predecessor with an Islamist one.

Shater has considerably expanded his empire of supermarket chains and textile and furnishings shops in the new Egypt. Likewise, he's viewed as a model businessman among the Muslim Brotherhood, which has so far continued Mubarak's neoliberal economic policies. It's an approach meant to win the trust of the foreign investors that Egypt so desperately needs.
Mubarak left his successor a country deeply in debt, where millions of people are unemployed and a quarter of the population lives below the poverty line. For years, salaries were constantly kept low and unions were suppressed.
Keeping Egypt from national bankruptcy will eventually require unpopular decisions, such as cuts to gas and bread subsidies. But, so far, Morsi has decided to wait it out. The only area where he has been active is a different one entirely: In a television address last week, Morsi announced a new religious campaign that will see an army of preachers fan out through the country "spreading the true word among the people." It's a re-education measure that may yet help to dislodge Western ideas from people's heads -- such as the absurd belief that religion is a private matter.
Translated from the German by Ella Ornstein
Posted by Paulo Roberto de Almeida at 17:29 Nenhum comentário:

The Brazilian Initiation Scholarship (BIS) is a key component of BRASA’s agenda to expand Brazilian Studies in the United States.  BRASA invites applications from graduate and undergraduate students for a one-time $1,500 travel scholarship to do exploratory research or language study in Brazil.  This scholarship targets aspiring Brazilianists with relatively little or no experience in Brazil.  It seeks to contribute to the student’s initial trip (for a period from six weeks to three months), to heighten the student’s interest in Brazil, and deepen his/her commitment to Brazilian studies in the United States.  Students are encouraged to combine this scholarship with other grants or awards.
Eligibility:  Proposals for the BIS will be reviewed according to the following criteria:
Highest priority will be given to applicants who are outstanding college seniors, recent college graduates applying to graduate programs in Brazilian studies or in Latin American studies with the intent of focusing on Brazil, or new graduate students already focusing on Brazil.
Students from all disciplines in the humanities and social sciences are eligible.  In exceptional cases, applications from the natural sciences will be given consideration (for example, someone in environmental sciences who is writing a dissertation on the Amazon or pollution in São Paulo and who plans to continue research on Brazil).
Preference will be given to those applicants who have little or no in-country experience in Brazil.  A student requesting funding to undertake an exploratory research trip should present evidence at the time of the application that he/she has achieved at least an intermediate level of competence in the Portuguese language sufficient to carry out the proposed research.
An applicant seeking support to undertake language studies should present evidence that after returning to the US, he/she intends to continue studying Portuguese and plans to engage in research on Brazil.
Successful applicants may combine BIS with other grants, scholarships, or awards, as long as he/she specifies clearly how the funds are going to be spent (for example, the BRASA scholarship might be used to cover travel costs, while a grant from another source could be used for living expenses, etc.).
Application Process:  A complete application (partial applications will not be considered) will include the following documents: (NOTE THAT ALL OF THE DOCUMENTS EXCEPT FOR THE TRANSCRIPTS AND LETTERS OF RECOMMENDATION MUST BE SUBMITTED AS ONE PDF OR MSWORD DOCUMENT).
The application cover page (download form);
(1) A two-page prospectus (double spaced, 12-point font);
(2) A two-page résumé or CV;
(3) A budget specifying how the $1500 will be spent;
(4) In the case of undergraduates or recent college graduates, a letter of intent to study Brazil in graduate school;
(5) If applying for exploratory research, include a two-page bibliography on the subject of study, and present evidence that the applicant has achieved at least an intermediate level of competence in Portuguese (competence can be demonstrated by a transcript or a letter from a university instructor of Portuguese);
(6) If applying for Portuguese language study, the name of the school should be specified;
(7) Proof of membership in BRASA;
(8) Two letters of recommendation from professors; and
(9) Copies of undergraduate and graduate transcripts.
The letters of recommendation and transcripts may be mailed directly to BRASA at the address below.  All other materials should be submitted together either as PDF or MSWord files in a single email to brasa-illinois@illinois.edu.
Evaluation Criteria and Selection Process:
In order to be considered for the scholarship, the two-page prospectus should:
(1) Clearly and coherently outline the project’s engagement with Brazil;
(2) Demonstrate as precisely as possible the feasibility of the proposed project (exploratory research or language study) and how it will contribute to the student’s academic development;
(3) Briefly discuss the role the work undertaken in Brazil will play in shaping the applicant’s future course of academic study (for instance, it could be the seed project for a larger grant application, provide the basis of a paper prepared for presentation at a BRASA conference, or serve as the foundation for future research on Brazil).
Report: Upon completion of the research experience in Brazil, recipients are required to file a two-page, double-spaced report with the BRASA Executive Director summarizing their activities and identifying relevant academic outcomes. In addition, a statement accounting for the expenditure of funds must be sent to the BRASA Executive Director. If the scholarship was used to study Portuguese, recipients should attach a certificate from the school where language studies were conducted. Following completion of studies in Brazil, BRASA strongly encourages recipients to participate in a subsequent BRASA congress in order to report on their activities.
Deadline for application: November 15, 2012.
Awards will be announced by February 1, 2013
To submit a proposal and for all other correspondence regarding this award, contact: 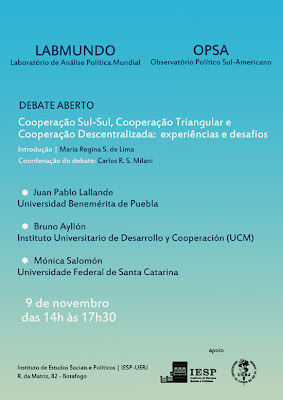 BERKELEY – We are not newly created, innocent, rational, and reasonable beings. We are not created fresh in an unmarked Eden under a new sun. We are, instead, the products of hundreds of millions of years of myopic evolution, and thousands of years of unwritten and then recorded history. Our past has built up layer upon layer of instincts, propensities, habits of thought, patterns of interaction, and material resources.
On top of this historical foundation, we build our civilization. Were it not for our history, our labor would not just be in vain; it would be impossible.
And there are the crimes of human history. The horrible crimes. The unbelievable crimes. Our history grips us like a nightmare, for the crimes of the past scar the present and induce yet more crimes in the future.
And there are also the efforts to stop and undo the effects of past crimes.
So it is appropriate this month to write not about economics, but about something else. Seventy-nine years ago, Germany went mad. There was delinquency. There was also history and bad luck. The criminals are almost all dead now. Their descendants and successors in Germany have done – and are doing – better than anyone could have expected at grappling with and mastering the nation’s unmasterable past.
Seventy years ago, 200,000 Soviet soldiers – overwhelmingly male and predominantly Russian – crossed the Volga River to the city of Stalingrad. As members of Vasily Chuikov’s 62nd Army, they grabbed hold of the nose of the Nazi army and did not let go. For five months, they fought. And perhaps 80% of them died in the ruins of the city. On October 15 – a typical day – Chuikov’s battle diary records that a radio message was received from the 416th Regiment at 12:20 PM: “Have been encircled, ammunition and water available, death before surrender!” At 4:35 PM, Lieutenant Colonel Ustinov called down the artillery on his own encircled command post.
But they held on.
And so, 70 years ago this November – on November 19 to be precise – the million-soldier reserve of the Red Army was transferred to General Nikolai Vatutin’s Southwestern Front, Marshal Konstantin Rokossovsky’s Don Front, and Marshal Andrei Yeremenko’s Stalingrad Front. They went on to spring the trap of Operation Uranus, the code name for the planned encirclement and annihilation of the German Sixth Army and Fourth Panzer Army. They would fight, die, win, and thus destroy the Nazi hope of dominating Eurasia for even one more year – let alone of establishing Hitler’s 1,000-year Reich.
Together, these 1.2 million Red Army soldiers, the workers who armed them, and the peasants who fed them turned the Battle of Stalingrad into the fight that, of any battle in human history, has made the greatest positive difference for humanity.
The Allies probably would have eventually won World War II even had the Nazis conquered Stalingrad, redistributed their spearhead forces as mobile reserves, repelled the Red Army’s subsequent winter 1942 offensive, and seized the Caucasus oil fields, thus depriving the Red Army of 90% of its motor fuel. But any Allied victory would have required the large-scale use of nuclear weapons, and a death toll in Europe that would most likely have been twice the actual World War II death toll of perhaps 40 million.
May there never be another such battle. May we never need another one.
The soldiers of the Red Army, and the workers and peasants of the Soviet Union who armed and fed them, allowed their dictatorial masters to commit crimes – and committed crimes themselves. But these crimes fall short by an order of magnitude of the great service to humanity – and especially to western European humanity – that they gave in the rubble along the Volga River 70 years ago this fall.
We are the heirs to their accomplishments. We are their debtors. And we cannot repay what we owe to them. We can only remember it.
But how many NATO leaders or European Union presidents and prime ministers have ever taken the time to visit the battle site, and perhaps lay a wreath to those whose sacrifice saved their civilization?

J. Bradford DeLong is Professor of Economics at the University of California at Berkeley and a research associate at the National Bureau for Economic Research. He was Deputy Assistant US Treasury Secretary during the Clinton Administration, where he was heavily involved in budget and trade negotiations. His role in designing the bailout of Mexico during the 1994 peso crisis placed him at the forefront of Latin America’s transformation into a region of open economies, and cemented his stature as a leading voice in economic-policy debates.
Posted by Paulo Roberto de Almeida at 22:17 Nenhum comentário:

The New York Times, October 29, 2012
On Oct. 29, 1929, stock prices collapsed on the New York Stock Exchange amid panic selling. Thousands of investors were wiped out.