Will Brazil remain the country of the future?

Oct 8th 2012, 20:09 by D.W. | LONDON
THE question of whether the Mexican economy might one day regain the top spot in the Latin American league tables has once again become an interesting one. In 2010, many thought it had been settled. The Brazilian economy, more than double the size of Mexico’s, grew at a 7.5% annual rate while Mexico puttered forward at close to 2%. What a difference two years makes. While the Brazilian economy is shambling along at an annualised rate of 1.9% so far in 2012, the Mexican economy is set to grow at 3.9%. If this trend continues, some reckon the Mexican economy will overtake Brazil’s as soon as 2022.
One believer is Benito Berber, Nomura’s Latin America strategist. In a recent report Mr Berber applies Solow growth accounting to a series of forecasts on Mexico and Brazil, with striking results:

Solow splits the contributing factors to economic growth into three categories: human capital (or worker skill levels), physical capital, and total factor productivy, which is essentially a residual that accounts for remaining, unexplained growth. Between 2000 and 2010 Mexico fell behind Brazil in human-capital terms thanks to competition from Chinese labour, lagging education, and incomplete labour-market reforms. This was amplified by steady emigration to America. By contrast, Brazil benefited from a “formalisation” of the labour market as 40m Brazilians entered the middle classes over the decade. A commodities boom led to big investments in Brazil, bringing up its investment-to-GDP figure from 15% to 19%. Mexico’s dependence on America's economy and a manufacturing sector heavily exposed to China led to disappointing gains from physical capital accumulation and total factor productivity.
Yet despite a slow start to the millennia, things are looking up for Mexico across all three of Robert Solow’s measures. Firstly, high manufacturing costs in China are improving the competitiveness and demand-environment for Mexican factories. Secondly, Brazil may have become too dependent on commodity-led growth. While moving resources to the commodity sector allowed Brazil to exploit a comparative advantage, many now see limited opportunity to improve total factor productivity, something which is usually limited to manufacturing. And although Brazil enjoyed a strong reforming government led by Hernando Cardozo in the 1990s, the last decade has been one of increasing welfare costs rather than additional reform. In Mexico by contrast, a newly reinstated PRI, a centre-right party, has promised to continue along the path of supply-side reform pursued by the previous government. 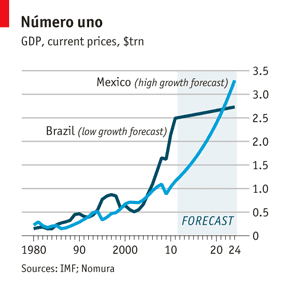 Mr Berber concludes that under a low growth estimate for Brazil and a high growth estimate for Mexico, the countries cross economic paths in 2022 (see chart). This is of course highly speculative; forecasting a decade ahead is notoriously difficult. Yet that such outcomes seem reasonable is remarkable given the conventional wisdom just a few years ago.
If the Mexican economy is to one day take over the Brazilian, it would be a boon for liberal economics in the face of Brazil’s more statist approach. Yet do not expect Brazil to give up the top spot easily. Indeed, a friendly rivalry may benefit both countries’ reform agendas.
« Polling the experts: In their own words (health and financial reform)
Postado por Paulo Roberto de Almeida às 00:26