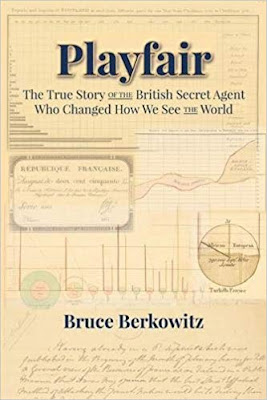 Maria Pia Paganelli’s recent publications include “David Hume on Banking and Hoarding” Southern Economic Journal.
Copyright (c) 2018 by EH.Net. All rights reserved. This work may be copied for non-profit educational uses if proper credit is given to the author and the list. For other permission, please contact the EH.Net Administrator (administrator@eh.net). Published by EH.Net (June 2018). All EH.Net reviews are archived at http://www.eh.net/BookReview.


William Playfair is best known as an ingenious Scot of questionable repute who happened to invent "statistical graphics"―the line, bar, and pie charts we use today. Some are also aware he developed theories explaining international trade and investment, made contributions to concepts like price indexes and measures of national power, and pioneered strategic analysis.
Yet even those familiar with his work will be surprised to learn that Playfair was, in fact, a secret agent, carrying out espionage and subversion against France on behalf of Great Britain. Many of his contributions to economics and statistics were a direct result of his most audacious operation, the first full-scale campaign to collapse a nation’s currency, as the French First Republic turned radical.
Playfair had a remarkable knack for appearing at―or propelling―the major events of his era. He’s at James Watt’s side for the birth of the Industrial Revolution. He is on the scene during the storming of the Bastille. He even helps trigger the first major political scandal in the newly formed United States, a land speculation gone bad involving Washington, Hamilton, and Jefferson.
This is the first book to uncover the full, true account of this remarkable, colorful man―undeniably brilliant, hopelessly flawed, and fundamentally important. Part biography, part history, and part detective story, its pages reveal the astounding inventions and adventures of this larger-than-life swashbuckler, rogue, genius, and patriot.
Distributed for George Mason University Press