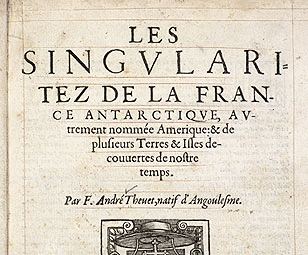 Title: The Special Features of French Antarctica, Otherwise Called America, and of Several Lands and Islands Discovered in Our Time

Description: André Thevet (1516/17-92) was a Franciscan friar who traveled widely and, through his writings, helped to establish cosmographie--as geography was called at the time--as a science in 16th-century France. After making trips to Africa and the Middle East in the 1540s, he was appointed chaplain to the expedition of Nicolas Durand de Villegagnon, which set out from Le Havre in May 1555 to establish a colony in Brazil. The expedition landed near present-day Rio de Janeiro in November of the same year. In January 1556, Thevet fell ill and left Brazil for France. The following year, he published this account of his voyage. The work was highly popular and led to his appointment as royal cosmographer. Thevet’s account includes descriptions of the coast of Africa, the Canary Islands, and Madagascar, all of which he visited on the way to Brazil, as well as of Florida and Canada, which he may have visited on his return trip. His descriptions of the native peoples he encountered and their customs and beliefs, as well as of the plants and animals he saw, are written in a plain, factual style. The work is illustrated with woodcuts, many of which are highly inaccurate, but which nonetheless influenced works by later travelers such as Theodore de Bry.

The link for the Brazilian section is:
http://www.wdl.org/en/search/gallery?ql=eng&a=-8000&b=2009&c=BR&r=LatinAmericaCaribbean