Thomas Sowell Has Been Right From the Start
By Jason L. Riley
The Wall Street Journal, July 22, 2020 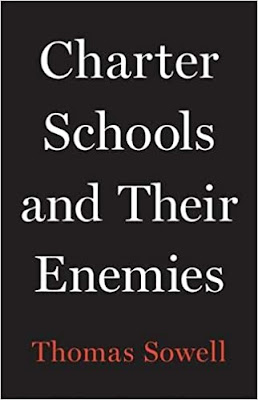 His latest book on charter schools continues his research on minority success in education.

The economist Thomas Sowell’s new book, Charter Schools and Their Enemies, was published last month on his 90th birthday. I hope he’s not done yet, but you could hardly find a more suitable swan song for a publishing career that has now spanned six decades.
Mr. Sowell’s earliest tomes—an economics textbook for college undergraduates and a book on economic history—were directed at students of the dismal science. But his third book, the semi autobiographical “Black Education: Myths and Tragedies,” was published in 1972 and written for the general public. It grew out of a long article on college admissions standards for black students that he wrote for the New York Times Magazine in 1970 after leaving his teaching post at Cornell. And it begins with a recounting of his own education— first at segregated schools in North Carolina, where he was born, and later at integrated schools in New York City, where he was raised.
The topic of education is one that he’s returned to repeatedly in his writings over the decades, in books like “Education: Assumptions Versus History” (1986), “Choosing a College” (1989) and “Inside American Education” (1993). In addition, he’s done pioneering research on the history of black education in the U.S. The preface to his latest work describes a conversation he had in the early 1970s with Irving Kristol, the late editor of the Public Interest. When Kristol asked what could be done to create high-quality schools for blacks, Mr. Sowell replied that such schools already existed and had for generations.
Kristol asked Mr. Sowell to write about these schools for the magazine, and a 1974 issue of Public Interest featured a lengthy essay by Mr. Sowell on the history of all-black Dunbar High School in Washington, which had outperformed its local white counterparts and repeatedly equaled or exceeded national norms on standardized tests throughout the first half of the 20th century. Over an 85-year span, from 1870 to 1955, the article noted, “most of Dunbar’s graduates went on to college, even though most Americans—white or black—did not.” Two years later, in the same publication, he wrote a second article, on successful black elementary and high schools located throughout the country. Mr. Sowell later told a friend that his work on black education had been “the most emotionally satisfying research I have ever done.”
In a sense today’s public charter schools, which often have predominantly low-income black and Hispanic student bodies, are successors to the high-achieving black schools that Mr. Sowell researched 40 years ago. The first part of “Charter Schools and Their Enemies” describes—in damning detail and with the empirical rigor we’ve come to expect from the author—how successful certain charter schools have been in educating poor minorities. To make sure he’s comparing apples to apples, his sample is limited to charter schools that are located in the same building with a traditional public school serving the same community.
And what’s irrefutably clear is that these charters schools are not simply doing a better job than their traditional counterparts with the same demographic groups. In many cases, inner-city charter-school students are outperforming their peers in the wealthiest and whitest suburban school districts in the country. In New York City, for example, the Success Academy charter schools have effectively closed the academic achievement gap between black and white students.
“The educational success of these charter schools undermines theories of genetic determinism, claims of cultural bias in the tests, assertions that racial ‘integration’ is necessary for blacks to reach educational parity and presumptions that income differences are among the ‘root causes’ of educational differences,” Mr. Sowell writes. “This last claim has been used for decades to absolve traditional public schools of any responsibility for educational failures in low-income minority communities.”
The point isn’t that there are no subpar charter schools—there are— but it’s clear to the author that any honest assessment of the data shows that school choice is a boon for groups that have long been poorly served by the system. It’s also clear that successful charter schools are a threat to the current power balance that allows the vested interests of adults who run public education to trump what’s best for students. As Mr. Sowell reminds us, “schools exist for the education of children. Schools do not exist to provide iron-clad jobs for teachers, billions of dollars in union dues for teachers unions, monopolies for educational bureaucracies, a guaranteed market for teachers college degrees or a captive audience for indoctrinators.”
In recent years, charter-school skeptics have made headway. Limits have been placed on how many can open and where they can be located. And Joe Biden, the presumptive Democratic nominee for president, is being pressured by progressives to limit charter growth if elected. All of which makes Mr. Sowell’s new book, in addition to its many other attributes, quite timely.

Thomas Sowell is a senior fellow at the Hoover Institution, Stanford University. He is the author of dozens of books and the recipient of various awards, including the National Humanities Medal, presented by the President of the United States in 2003.

A leading conservative intellectual defends charter schools against the teachers' unions, politicians, and liberal educators who threaten to dismantle their success.

The black-white educational achievement gap -- so much discussed for so many years -- has already been closed by black students attending New York City's charter schools. This might be expected to be welcome news. But it has been very unwelcome news in traditional public schools whose students are transferring to charter schools. A backlash against charter schools has been led by teachers unions, politicians and others -- not only in New York but across the country. If those attacks succeed, the biggest losers will be minority youngsters for whom a quality education is their biggest chance for a better life.

Randy A. Cook
5.0 out of 5 stars A Book that will make your blood boil!
Reviewed in the United States on July 2, 2020
Verified Purchase
First off, you need to get past chapter 2, which may seem tough after seeing the statistics seemingly repeated for several different Charter School networks, but don't get discouraged! There is light at the end of the Chapter 2 tunnel! The level of downright immoral and uncaring behavior of people who seemingly always claim to be so caring about everyone is apalling, and frankly shocking. I can only hope this book reaches many parents who need better schools for their children. If we're lucky it will speak to someone in society whomis truly looking for a way to help kids in failing schools and who has the means to start a Charter School, and has the stomach for it...It will be interesting to see the negative reviews and refutations of this book over the coming weeks and months which hopefully bring this topic to the national stage.The author has taken the time and effort to overcome seemingly every objection (valid and frivolous) to charter schools by providing the data to support his assertions, primarily from New York state. He is honest where charter schools aren't the best, but the overwhelming supply of emperical data suggests that Charter Schools are much needed and in greater numbers in most big cities.His disdain for the Mayor of New York is not lost on the reader, and rightfully so after reading the actions taken by the Mayor to sacrifice the education of New York's youngsters for what seems to be his own ego and that of his "supporters". I just can't understand it myself, but like I said, maybe we'll see some rebuttals, and hopefully they have facts to back them up.
Posted by Paulo Roberto de Almeida at 16:46