The region’s contraction of 7 percent in 2020 was the sharpest in the world, by far exceeding the global slowdown of 3.3 percent. Growth for 2021 is projected at 4.6 percent, well below the 5.8 percent estimated for emerging markets excluding China. Income per capita will not catch up with its pre-pandemic level until 2024, resulting in a 30 percent cumulative loss relative to the pre-pandemic trend.

Growth in Latin America and the Caribbean recovered briskly in the second half of 2020, yet still more slowly than the global economy and other emerging markets. That’s despite unprecedented policy support, strong performance of trading partners, soaring commodity prices and accommodative global financial conditions. The persistence of the health crisis in many countries casts a shadow on the near-term outlook. People and economies continue to require a short-term shot to exit from the COVID-19 crisis, while the aggravation of several underlying structural fragilities poses significant long-term challenges.

The region’s contraction of 7 percent in 2020 was the sharpest in the world, by far exceeding the global slowdown of 3.3 percent. Growth for 2021 is projected at 4.6 percent, well below the 5.8 percent estimated for emerging markets excluding China. Income per capita will not catch up with its pre-pandemic level until 2024, resulting in a 30 percent cumulative loss relative to the pre-pandemic trend.

The outlook, however, is subject to an extraordinary degree of uncertainty as the race between vaccines and the virus continues. On the upside, faster control of the pandemic globally as well as stronger than anticipated domestic policy support would boost growth. Fast vaccination and significant policy support are giving Chile a short-term boost. The country is expected to bounce back already this year to its pre-pandemic GDP level.

On the downside, the recent resurgence of the virus in Brazil, Chile, Paraguay, Peru and Uruguay, combined with slow vaccine rollouts (except in Chile) cast a shadow on the near-term outlook—though new lockdowns are likely to be less damaging than at the start of the pandemic as economies have learned to adjust. Brazil is projected to recover by 2022 due to the withdrawal of fiscal and monetary policy support and slow vaccine rollout. Mexico will only return to its pre-pandemic GDP level by 2023, despite impulse from the US’ large fiscal policy plan, due to the absence of significant domestic fiscal support and the reversal of structural reforms. The American Rescue Plan will boost growth in some Central American countries through trade and remittances, helping these countries to rebound by 2022. Caribbean tourism-dependent economies will be the last to recover (only in 2024) due to the slow resumption in tourism.

The increase in US long-term yields so far has had a somewhat muted impact on asset prices and capital flows in the region. But a continued increase in long-term interest rates remains a risk.

The recovery has also been heterogeneous within countries. Manufacturing has rebounded faster than contact-intensive services, aided by exports in some cases, particularly in Mexico. However, labor markets remain fragile—only two-thirds of those who lost jobs at the beginning of the pandemic in Brazil, Chile, Colombia, Mexico and Peru were employed again by the end of last year. The informal sector, which suffered the largest losses initially, has driven the job recovery.

Average labor income fell since the beginning of the pandemic, with pronounced divergences in labor market outcomes across countries, sectors, and demographic groups. Countries that implemented employment retention schemes (for example, Brazil) had a less dramatic fall in employment but the recovery has also been slower. However, even in the case of a relatively quick recovery in Mexico, those who have been reemployed have had larger earning losses than those whose employment remained uninterrupted during the crisis. Women and low-educated workers have struggled the most. Low-skilled female workers in particular lost more jobs or had to cut back on working hours even when able to retain employment, suffering the largest income losses. 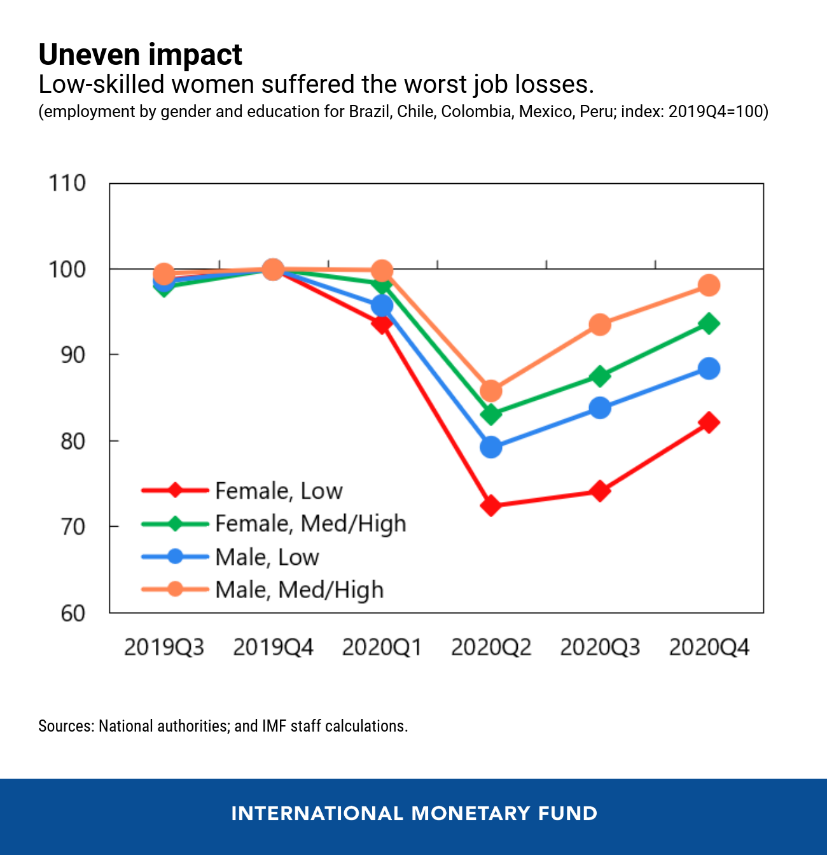 Poverty is estimated to have increased by 19 million people, and inequality, as measured by the Gini coefficient, increased by 5 percent compared to pre-crisis levels. The pandemic will also leave long-lasting damage to human capital from school closures, which were longer than in other regions.

While the precise learning losses are difficult to estimate, staff analysis suggests that students aged 10 to 19 might expect a 4 percent lower income on average over their lifetimes if the lost days of schooling in 2020 are not compensated.

The income losses differ among countries, depending on how much the pandemic reduces the chance of completing secondary education and on the size of the skill premium for higher education. The losses will be greatest for students whose families are less able to support out-of-school learning, exacerbating already high income inequality and low levels of educational attainment. 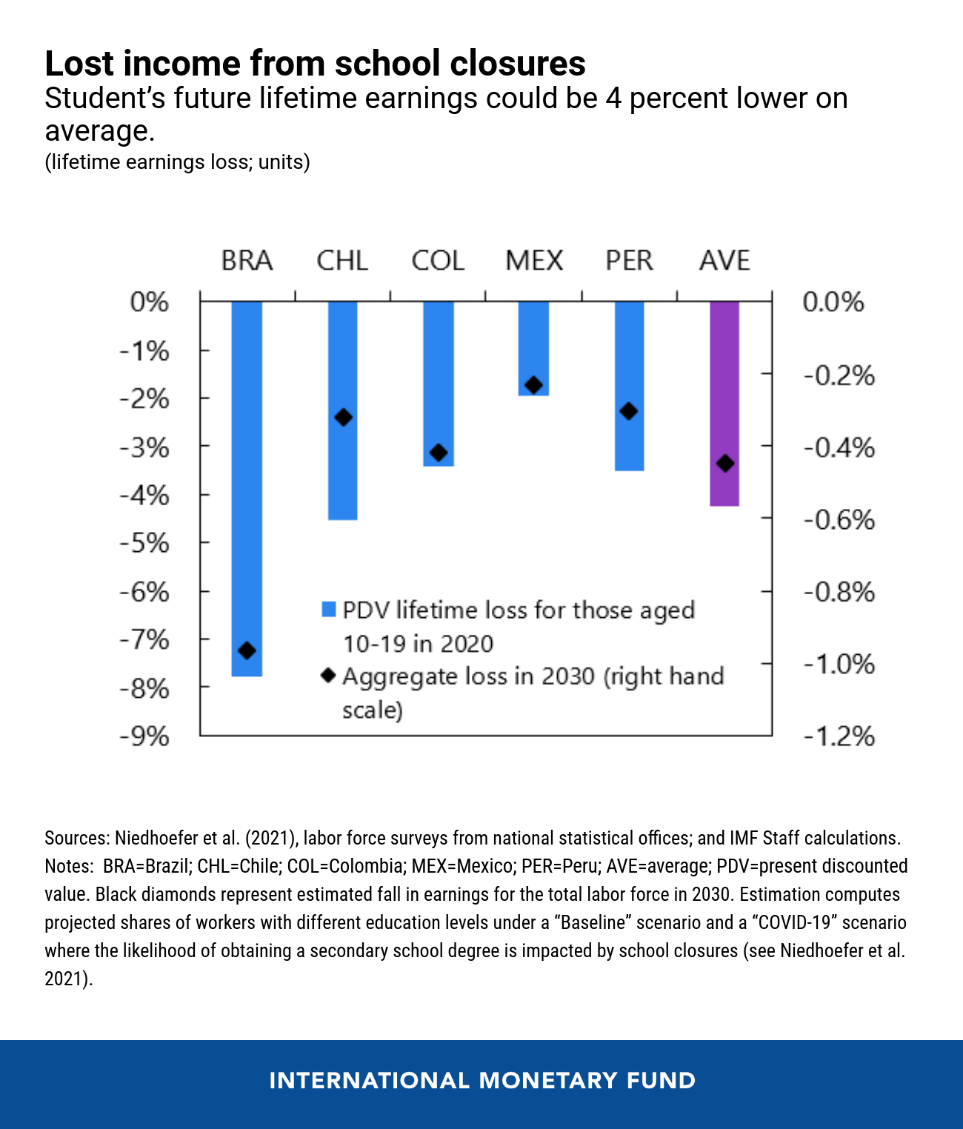 The most urgent task continues to be controlling the pandemic, by ensuring that health care systems are adequately resourced, and everybody can be vaccinated. Fiscal and monetary policies should remain supportive in countries where there is sufficient policy space—a short-term shot for their economies—while countries with tight budgets should reprioritize spending towards healthcare and support for households, and work to create additional fiscal space. Given the continued heavy toll on low-income workers, targeted support to facilitate job creation and retraining may be warranted.

Healing longer-term scars will be more challenging and will require accelerating structural reforms, expanding access to high-quality education and health, broadening social safety nets, and improving the business climate. A deeper structural transformation that could be facilitated by a broad fiscal pact is needed to reverse years of slow growth. 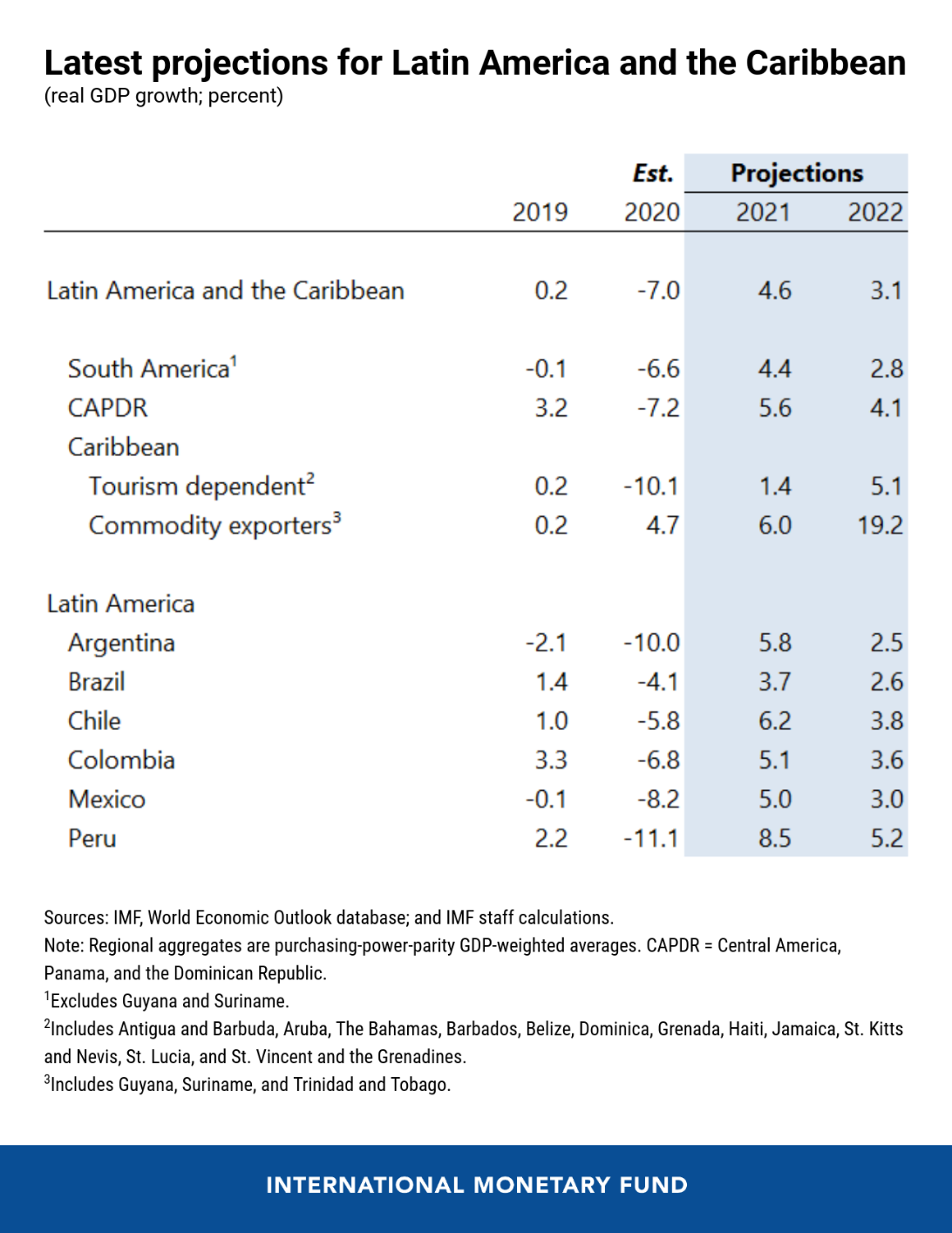 Alejandro Werner is Director of the IMF's Western Hemisphere Department.

Takuji Komatsuzaki is a senior economist in the Regional Studies Division of the IMF’s Western Hemisphere Department.

Carlo Pizzinelli is an economist in the Regional Studies Division of the IMF's Western Hemisphere Department.

We want to hear from you! Click here for a 3-question survey on IMFBlog.

Thank you again for your interest in IMF Blog. Read more of our latest content here.