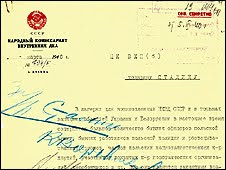 Russia has published online once-secret files on the 1940 Katyn massacre, in which some 22,000 members of the Polish elite were killed by Soviet forces.

The state archive said the "Packet No. 1" original files had until now only been available to researchers.

The Soviet Union denied its role in the massacre for decades.

But relations between Russia and Poland have warmed since the Polish president and others were killed in a plane crash on their way to a Katyn commemoration.

The six documents that were published on the state archive website were declassified in 1992 on the order of the then-Russian president, Boris Yeltsin.

'Symbolic gesture'
One of the documents is a 5 March, 1940 letter from the then-head of the Soviet secret police or NKVD, Lavrenty Beria, to Soviet leader Joseph Stalin, recommending the execution of Polish prisoners of war.

Beria refers to them as "steadfast, incorrigible enemies of Soviet power".

"Each of them is just waiting for liberation so as to actively join the struggle against Soviet power," it says.

The letter bears Stalin's signature in blue pencil, with the comment "In favour".

Given that historians have already had access to the files for some time, correspondents say the decision to put them on the state archive website is likely to be seen as a symbolic gesture, rather than shedding new light on what happened at Katyn.

"We on the Russian side are showing absolute openness in telling what happened in Katyn and other places with Polish prisoners of war," Russian state archive chief Andrei Artyzov was quoted as saying by Russian news agencies.

"All the basic documents about these events have been published."

Among the files that remain secret are documents relating to a Russian investigation into the massacre that began in the 1990s.

Russian human rights campaigners have appealed for those documents to be declassified.

Joint commemoration
Poland has repeatedly demanded that Russia open all its files on Katyn, and the issue has soured relations between the two countries in the past.

Recently though, tension over Katyn has eased. 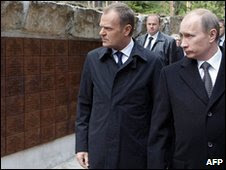 Earlier this month leaders from both states marked the massacre together for the first time, in a joint ceremony attended by Russian Prime Minister Vladimir Putin and his Polish counterpart Donald Tusk.

It was the first Russian ceremony to commemorate Katyn.

Days later, Polish President Lech Kaczynski and more than 90 others were killed when their plane crashed as it was trying to land in western Russia ahead of a separate event to mark the killings.

Moscow's handling of the aftermath of the crash was well received by Poles.

The April 1940 killings were carried out by the NKVD on Stalin's orders.

Members of the Polish elite, including officers, politicians and artists, were shot in the back of the head and their bodies dumped in mass graves.

The killings took place at various sites, but the western Russian forest of Katyn has become their chief symbol.

The Soviet Union blamed the massacre on Nazi Germany before acknowledging responsibility in 1990.

One of the documents now posted online was a March 1959 letter marked "Top Secret" from the former head of the KGB, Alexander Shelepin, to then-Soviet leader Nikita Khrushchev, proposing that all dossiers concerning the Katyn killings be destroyed.

He said the authorities should just keep a few documents - the minutes of meetings of the NKVD troika that condemned the prisoners and some papers on the fulfilment of the troika's instructions.

Shelepin wrote that the official Soviet version - that Nazi Germany had carried out the killings - had been "firmly implanted in international opinion".

"It's yet another symbolic step testifying to the fact that we are witnessing an obvious change in the Russian attitude and handling of the Katyn issue," Polish foreign ministry spokesman Piotr Paszkowski told the BBC.

Polish historians said the Russian president's decision was an attempt to end persistent speculation in Russia that the massacre was in fact committed by Nazi Germany. German troops uncovered the first mass grave in Katyn in 1943.

It's certainly another gesture from the Russian authorities which began in earnest with Vladimir Putin's invitation to his Polish counterpart, Donald Tusk, to jointly commemorate the massacre for the first time earlier this month. The plane crash which killed the Polish president, Lech Kaczynski, three days later has accelerated that process. 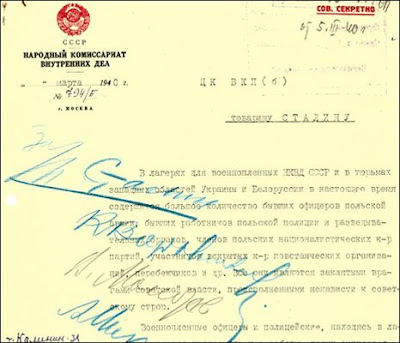 Some 22,000 members of the Polish elite were killed by Soviet forces, and for decades the USSR claimed that it was the work of Nazi Germany. Russia gave the documents to Poland in 1992.

Here are excerpts from the Beria letter:

In prisoner-of-war camps run by the USSR NKVD and in prisons in western Ukraine and Belorussia there is currently a large number of former Polish army officers, former officials of the Polish police and intelligence services, members of Polish nationalist counter-revolutionary parties, members of unmasked rebel counter-revolutionary organisations, defectors and others. They are all sworn enemies of Soviet power, filled with hatred towards the Soviet system.

The POW officers and police in the camps are trying to continue counter-revolutionary work and are engaged in anti-Soviet agitation. Each of them is just waiting for liberation so as to actively join the struggle against Soviet power….

In total in the prisoner-of-war camps (not counting soldiers and non-commissioned officers) there are 14,736 former officers, government officials, landowners, policemen, military police, jailers, settlers and spies. More than 97% are of Polish nationality…

Based on the fact that all of them are steadfast incorrigible enemies of Soviet power, the USSR NKVD deems it essential:

I. To propose that the USSR NKVD: [underlined - ed]

Give special consideration to

2) and also the cases of those arrested and remaining in prisons in the western districts of Ukraine and Belorussia, totalling 11,000 - members of various counter-revolutionary spy and sabotage organisations, former landowners, factory owners, former Polish army officers, government officials and defectors -

Imposing on them the sentence of capital punishment - execution by shooting.

II. The cases are to be handled without the convicts being summoned and without revealing the charges; with no statements concerning the conclusion of the investigation and the bills of indictment given to them…."

[The letter is signed "L. Beria" in blue pencil, under the title USSR People's Commissar for Internal Affairs.

The first page of the letter bears the word Za - "in favour" - scrawled in blue pencil with the signatures of then Soviet leader Joseph Stalin and of Politburo members K. Voroshilov and A. Mikoyan, along with V. Molotov in ordinary pencil. In the margin are the names Kalinin and Kaganovich - also aides to Stalin - added in blue ink, and also with the word za.]
Postado por Paulo Roberto de Almeida às 11:31 3 comentários: