Outsourcing Empire: How Company-States Made the Modern World, book by Andrew Phillips and J.C. Sharman (H-Diplo) 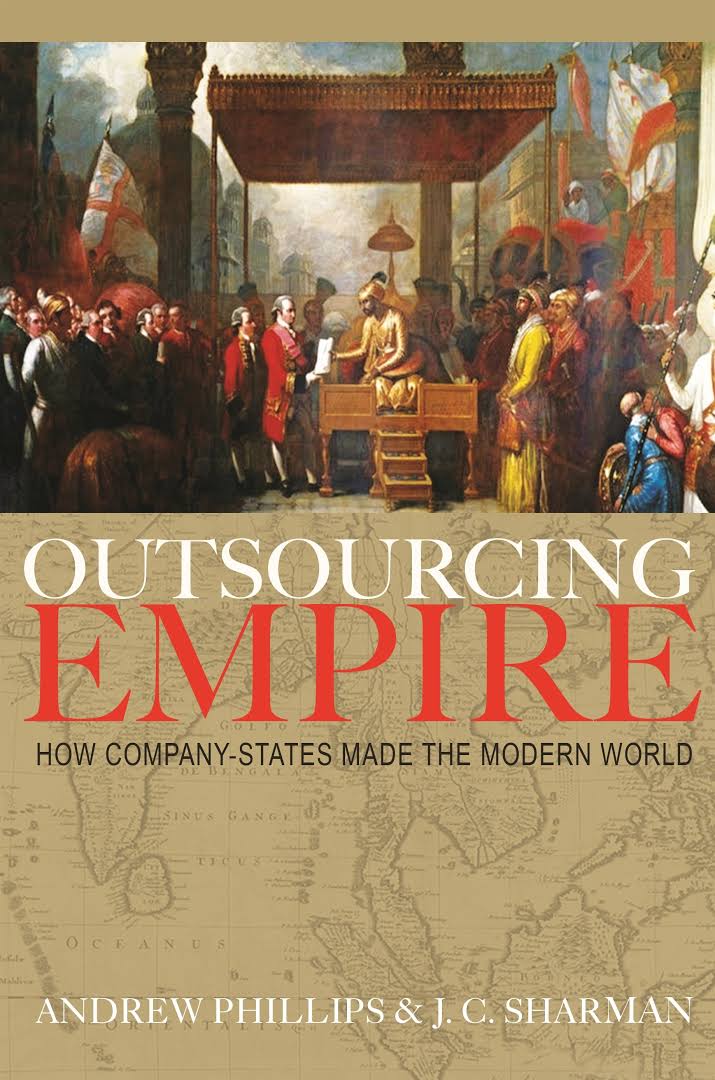 Outsourcing Empire:  How Company-States Made the Modern World

If the discipline of International Relations (IR) had existed in the seventeenth and eighteenth centuries, it would have been consumed by studying the corporate entities that ruled the world through waging wars, securing commerce, and governing populations.  Such “company-states” include the well-known Portuguese Estado da India, the English East India Company (EIC), the Dutch East India Company (VOC), and the Hudson’s Bay Company (HBC), and the lesser-known French East India Company, Dutch West India Company, English Royal African Company, and Russian-American Company, among others.[1] IR scholars would have asked the same questions then that we ask of states today about security, cooperation, status, identity, governance, and power politics. They would also likely have asked questions of company-states we do not ask of states today about balancing profit and power and securing legitimacy outside any social compact.  There would be studies on company-states on their own and their relations to other sovereigns – the monarchs, the parliaments, the city states and leagues, and of course the empires of which they were themselves part.  Researchers might have watched with surprise as the company-states gradually disappeared, leaving behind a more homogenous statist form in the sovereign state.

To catch a glimpse of what such studies might have revealed, IR scholars of the twenty-first century would benefit from reading Andrew Phillips and J.C. Sharman’s fantastic new monograph, Outsourcing Empire: How Company-States Made the Modern World.  The book begins from the premise that company-states were “inherently political actors, engaged in diplomacy, fighting wars, and governing substantial domains” (3).  During the seventeenth and early eighteenth centuries, company-states were ubiquitous – “almost every major European ruler chartered at least one company-state at some point, and the resulting institutions were active in almost every region of the world” (11).  Beginning in the mid-1700s, however, company-states encountered more trade-offs between carrying on expensive military operations and controlling their commerce as well as facing increasing delegitimation from European sovereigns who became uneasy with the influence of company-states.  By the nineteenth century, states “delegated fewer powers, and were much more willing and able to interfere even in relation to those they had” (15).

Outsourcing Empire may be considered a sequel to the authors’ previous book, International Order in Diversity: War, Trade and Rule in the Indian Ocean.[2] In that work, Phillips and Sharman situated the company-states, primarily the Estado, EIC, and VOC, alongside other diverse vessels of international ordering in Asia like the Mughal Empire and the Marathas.  Outsourcing Empire focuses entirely on company-states and widens the regional scope to include the Atlantic.  This is an ambitious and welcome follow-up.  The inclusion of more cases beyond Asia allows for a comparative investigation to complement recent company-state histories.[3] While the authors re-trace some of their earlier work when describing the rise and fall of the EIC and VOC, they bring new material to light in studying the arcs of the HBC and the African companies.  The Atlantic company-states also allow for a comparative assessment of why their Asian counterparts were more successful.  However, where International Order in Diversity developed an over-arching theoretical framework to explain “durably diverse” international systems—as opposed the “sameness” that Kenneth Waltz argues flows from international competition—Outsourcing Empire does not hold such a master theoretical narrative.[4] Instead, the chapters trace how various company-states emerged and declined with some common themes.  This is not a drawback, of course, but helps differentiate this work from Phillips and Sharman’s previous evaluation of company-states for international history.

Outsourcing Empire contributes to how IR understands empire, sovereign states, and corporate power.  The book is at its best in laying out how company-states made the European imperial project possible as the “alter ego” of their absent sovereigns (52).  In so doing, company-states claimed immense profit, territory, and status for themselves.  Meanwhile, the book’s account of the fall of company-states also tracks the co-evolution of consolidating sovereign states, building on Janice Thomson’s work on the delegitimation of non-state international violence.[5] Phillips and Sharman understandably pay special attention to the EIC, whose “company-run subcontinental empire inspire[ed] parliamentary intervention [and a] slow-motion nationalization as an appendage of the British state” (112). Finally, the book also helps contextualize corporate power through its comparative focus on the differing global influence of the Atlantic company-states relative to the Asian ones they emulated.  Outsourcing Empireconvincingly argues that Atlantic company-states faced lower barriers to entry and closer geographical proximity to the European polities relative to their Asian peers, resulting in greater competition and more political pressure to “dilute or revoke” monopoly privileges (68).

Ultimately, the book raises some generative questions for future inquiry.  First, Phillips and Sharman do not explore what “company sovereignty” actually meant as a claim to authority, where it was located, and how it may have differed across the company-states. The book effectively shows that any doctrine of indivisible sovereignty had little relevance for how company-states as well as European and non-European polities conducted relations for much of the seventeenth and mid-eighteenth centuries.  Yet, it leaves open the examination of how company-states attempted to legitimate their sovereign rule and whether their understanding of company sovereignty clashed with what would become modern state sovereignty.  Second, Phillips and Sharman conclude that we have moved from a permissive to a prohibitive era in which “company-states disappeared entirely, and the modern international system became a universal sovereign state monoculture” (212).  While acknowledging that many powerful companies abound, Phillips and Sharman do not view any as contemporary manifestations that match the military might and legal right of company-states (215).  This seems like a reasonable position to take if one were searching for territorial corporate empires who ruled the world in much the same way as other sovereigns.  However, company-states also ushered in new kinds of sovereign power.  With that perspective in mind, the book presents an opportunity to reflect on what could be the early stages of a new kind of company-state in the Big Tech empires who surveil and control billions to extract the most valuable global commodity: data.[6] While Outsourcing Empire seems to dismiss this possibility, the book’s rich narrative provides future researchers with a head start on further pursuing this comparison.

[1] Philip Stern, “‘A Politie of Civil and Military Power’: Political Thought and the Late Seventeenth-Century Foundations of the East India Company-State,” Journal of British Studies 47:2 (2008): 253-283

[3] Philip Stern, “‘A Politie of Civil and Military Power’: Political Thought and the Late Seventeenth-Century Foundations of the East India Company-State,” Journal of British Studies 47:2 (2008): 253-283; Philip Stern, The Company-State: Corporate Sovereignty and the Early Modern Foundations of the British Empire in India (Oxford: Oxford University Press, 2011); Edward Cavanagh, “A Company with Sovereignty and Subjects of Its Own - The Case of the Hudson's Bay Company, 1670-1763,” Canadian Journal of Law and Society 26:1 (2011): 25-50; Emily Erikson, Between Monopoly and Free Trade: The English East India Company, 1600 - 1757 (Princeton: Princeton University Press, 2014); Michael Wagner, The English Chartered Trading Companies, 1688–1763: Guns, Money and Lawyers (New York: Routledge, 2018)

[6] Shoshana Zuboff, The Age of Surveillance Capitalism: The Fight for a Human Future at the New Frontier of Power (New York: Public Affairs, 2019).