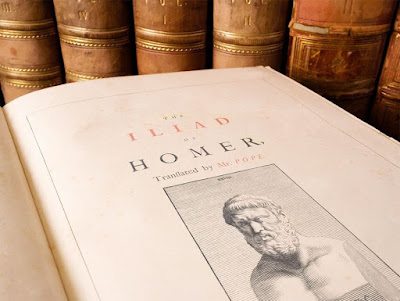 Homeric Epithets: Famous Titles From 'The Iliad' & 'The Odyssey'

One of the most influential authors of all time was Homer, the creator of The Iliad (set during the Trojan War) and The Odyssey (about the adventures of Odysseus, king of Ithaca.). These epic poems, originally written in Ancient Greek,  impacted both Greek literature and language across Western civilization through the present era — not bad for a person born over 2,700 years ago.

We could write an entire book on these poems (and lots of people have), but we’re going to focus on the types of words and phrases Homer used in his work — specifically, epithets. The modern definition of “epithet” is more often related to abusive or hostile language — such as profanity or racial slurs. But an epithet is also a word or phrase that describes a person’s qualities. For example, in the name Catherine the Great, “the Great” is an epithet.

When Homer uses epithets, he creates adjective phrases to describe characters or places. He tells us of “mountain-bred lions,” “all-powerful Cronus,” and “laughter-loving Aphrodite.” And he doesn’t just use these phrases once. In some instances, Homer recycles them over and over again.

So, why reuse the exact descriptive phrases? Isn’t variety a mark of good writing? In Homer’s case, repeating epithets has two critical functions.

First, it helps him fit the constraints of his chosen style of poetic meter — dactylic hexameter. Poetic meter is a way of describing the rhythmic structure of a poem. Most English verse is written in iambic pentameter (Shakespeare and Milton loved it). Dialytic hexameter is so closely associated with Homer that it's often called Homeric hexameter. Virgil’s Aeneidand Ovid’s Metamorphosis are also written in this style.

Second, repeating specific descriptive phrases would have been a helpful memory aid for the singer tasked with performing one of these epic poems. Back in the BCE years, most people couldn’t read, so poems were recited from memory by bards and musicians. These epics would have been performed in front of audiences over several days.

The Iliad is roughly 15,000 lines of poetry and might take 30 hours to perform in full. So, using the same epithets to describe characters would help the performers remember their lines and allow the audience to keep everything straight after many hours of listening.

Epithets play an essential role in setting the scene and reinforcing characterization. Let’s take a look at some of the most famous Homeric epithets:

“man of twists and turns” (Odysseus)

“master of the war cry” (Diomedes)

Readers of Homer will notice these epithets are true of the characters all of the time. For example, Achilles is “swift-footed” even when he’s sitting down and not running anywhere. Homer uses this poetic language to tell the listener something more profound about the character’s skills and personality.

Hector is “bright-helmeted,” which calls to mind his prowess as a warrior. Yet, Hector’s son is frightened by his father’s helmet, perhaps foreshadowing when Hector goes on to die in battle with Achilles.

Odysseus earns many epithets during his epic poem, but “man of twists and turns” is a bit of a confusing one. Are we meant to see Odysseus as shifty? Or as a man who’s able to adapt to challenging situations to stay alive? He’s also described as a “hero” and “wise,” so it’s likely Homer views Odysseus as a noble and sympathetic character.

Contemporary writers pay homage to Homer’s epithets in various ways. In his 1922 novel Ulysses, James Joyce uses the phrase "the snotgreen sea" as a twist on "the wine-dark sea." Twentieth-century author Thomas Wolfe is a huge fan of the quasi-Homeric epithet, using phrases like "thousand-spired city" and "cloud-capped, rosy-hued Babylon"​ to describe New York City.