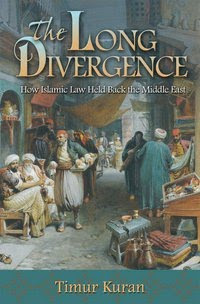 Around 300 years ago, the bazaars of the Middle East were overflowing with luxury goods. The commercial centres of the region attracted all variety of fortune seekers, speaking numerous languages. There was nothing to indicate that the region would not continue to be economically prosperous. But then the trajectory changed. The Middle East nosedived into a downward spiral of underdevelopment. So what went wrong?

The major causes of the economic stagnation of the Middle East, which includes Turkey, are not colonisation, or the conservative and anti-scientific attitudes of the people, argues Timur Kuran, a professor of Islamic studies at Duke University. While colonisation certainly played a role, many former colonies, such as Brazil and India, have managed to overcome the historic hurdles of occupation. Conservatism and anti-scientific attitudes are as prevalent in Europe as the Middle East, and they have not been a barrier in the development of the West. The real cause of underdevelopment in the Middle East, Kuran suggests in this meticulously argued book, is the Sharia, or Islamic law.

When it was first formulated, the Sharia developed institutions, such as contract law, that were advanced and sophisticated for its time. But the law has not evolved and adjusted to the new world of business and finance. There have been, throughout history, many attempts to reinterpret it, eliminate ambiguities and resolve contradictions. In some areas, such as tax collection, innovations never ceased. However, the substance of the law was not transformed significantly to cope with radical changes in the range and magnitude of economic activity. The reinterpretations were seldom more than odd ripples in a pond.

Kuran identifies contract law, rules of inheritance, the ban on usury, and the death penalty for apostasy as key elements of Islamic law that thwarted economic development of the Middle East. His goal is not to rubbish Islamic law. Indeed, he takes pains to explore its positive features. But to demonstrates convincingly that lack of innovation generated negative consequences, even from the progressive aspects of Islamic law.

During the Middle Ages, business transactions were based on personal relationships. Islamic contract law, on the other hand, promoted cooperation outside family and kin. Complete strangers could come together to form a business partnership on the basis of mutual interest that was recognised in law and upheld in courts. The problem was that an Islamic partnership could be terminated at will by any partner. The death of a partner also dissolved the partnership, with subsequent profit and loss going solely to the survivor. The children and family of the deceased partner could neither inherit nor automatically take his place.

This meant that durable business partnerships that could last generations did not emerge in the Middle East. The private enterprises in the region became atomistic. When businessmen came together to pool their resources in profit-making endeavours, their cooperation was only temporary and seldom lasted more than a few months.

The problem was compounded by the egalitarian nature of Islamic laws of inheritance. These were designed to dissipate wealth in society and prevent its accumulation in fewer and fewer hands. But it also meant that business empires of successful merchants never survived after them, as their estates were divided and dispersed into several small segments. Recombination and re-emergence of the empire was almost impossible. Everything had to begin again from ground zero with new partnerships.

The ban on usury made it difficult for merchants to obtain credit and suppliers to lend money. Often, it increased the cost as both suppliers and users of credit discovered innovative strategies to bypass the prohibition. The bar on interest also meant that banks could not emerge. There was no incentive to trade shares; or any need for standardised accounting.

The punishment for apostasy made it impossible for Muslims to do business with non-Muslims. They risked life and limb if they conducted business under a non-Muslim legal system, or took disputes to non-Muslim judges.

To make matters worse, social services in Middle Eastern societies were provided by pious foundations, or waqfs. These charitable trusts, set up under Islamic law and supervised by religious officials, provided the region with such essential services as water supplies and looked after orphanages, schools and colleges. They could outlive their founders and continue for perpetuity. But as they were not self-governing, their caretakers could not maximise profits. They thus became an impediment to the growth of corporations.

All this meant that the Middle East was very late in adopting key institutions of modern economy. The laws, institutions and organisational forms, that could mobilise productive resources on large scales within enduring private enterprises, so essential for economic development, just did not emerge in the region.

This is a fresh and thought-provoking argument. But it is based on the assumption that Western financial institutions, and self-serving corporations, are the best possible model for development. Given the havoc that these institutions have caused in recent times, and the fact that injustice and obscene wealth is integral to their make-up, I think it is an assumption too far.

One also needs to consider why Islam insists on the egalitarian distribution of wealth and historically suppressed the emergence of monopoly capital. Perhaps it has something to do with a socially conscience vision of society that emphasises genuine equity and justice? Kuran's thesis is contentious; but it does provide us with an incentive to reformulate Islamic law. It is an excellent starting-point for a debate long overdue.

Ziauddin Sardar's 'Reading the Qur'an' will be published by Hurst in May.

Review at The Economist: 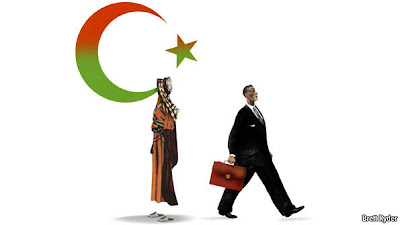 The crescent and the company
Schumpeter
The Economist, January 27th 2011

IN 2002 a group of Arab scholars produced a brave report, under the auspices of the United Nations, on the Arab world’s twin deficits, in freedom and knowledge. A salutary debate ensued. Now Timur Kuran, a Turkish-American economist based at Duke University, has written an equally brave book on “how Islamic law held back the Middle East”. One can only hope that the result will be an equally salutary debate.

For most of its history the Middle East was just as dynamic as Europe. The great bazaars of Baghdad and Istanbul were full of fortune-seekers from hither and yon. Muslim merchants carried their faith to the far corners of the world. In the 1770s Edward Gibbon had little difficulty imagining Islamic theology being taught in Oxford and across Britain—if only the battle of Tours-Poitiers in 732 had turned out differently.

The standard explanations for this decline are all unsatisfactory. One is that the spirit of Islam is hostile to commerce. But if anything Islamic scripture is more pro-business than Christian texts. Muhammad was a merchant, and the Koran is full of praise for commerce. A second explanation is that Islam bans usury. But so do the Torah and the Bible. A third—popular in the Islamic world—is that Muslims were victims of Western imperialism. But why did a once-mighty civilisation succumb to the West?

In “The Long Divergence” Mr Kuran advances a more plausible reason. The Middle East fell behind the West because it failed to produce commercial institutions—most notably joint-stock companies—that were capable of mobilising large quantities of productive resources and enduring over time.

Europeans inherited the idea of the corporation from Roman law. Using it as a base, they also experimented with ever more complicated partnerships. By 1470 the house of the Medicis had a permanent staff of 57 spread across eight European cities. The Islamic world failed to produce similar innovations. Under the prevailing “law of partnerships”, businesses could be dissolved at the whim of a single partner. The combination of generous inheritance laws and the practice of polygamy meant that wealth was dispersed among numerous claimants.

None of this mattered when business was simple. But the West’s advantage grew as it became more complicated. Whereas business institutions in the Islamic world remained atomised, the West developed ever more resilient corporations—limited liability became widely available in the mid-19th century—as well as a penumbra of technologies such as double-entry book-keeping and stockmarkets.

How much does this matter for modern business? From the late 19th century onwards Middle Eastern politicians borrowed Western institutions in order to boost economic growth. In the 1920s Ataturk introduced a thoroughly secular legal system in Turkey. Today the Islamic world boasts muscular companies and hectic stockmarkets (the market capitalisation of the region’s three biggest countries, Turkey, Egypt and Iran, doubled between 2003 and 2008). Dubai is laying out a red carpet for the world’s companies. Turkey is growing much faster than Greece.

Yet the “long divergence” continues to shape the region’s business climate. Most obviously, the Middle East has a lot of catching up to do. Income per head is still only 28% of the European and American average. More than half the region’s firms say limited access to electricity, telecoms and transport is a problem for business. The figure in Europe is less than a quarter.

There are more subtle echoes. Business across the region remains intertwined with the state while the wider commercial society is weak. The Global Entrepreneurship Monitor suggests that rates of entrepreneurship are particularly low in the Middle East and north Africa. Transparency International’s corruption-perceptions index suggests that corruption is rife: in 2010, on a scale from one (the worst) to ten, Western Europe’s five most populous countries received an average score of 6.5, whereas the three most populous countries in the Middle East averaged 3.2 (Turkey scored 4.4, Egypt 3.1 and Iran 2.2).

Culture’s long shadow
The “long divergence” also helps to explain some of the Islamist rage against capitalism. Traditional societies of all kinds have been uncomfortable with corporations which, according to Edward Thurlow, an 18th-century British jurist, have “neither bodies to be punished, nor souls to be condemned”. But that unhappiness has been particularly marked in the Middle East. Corporations and other capitalist institutions were imported by progressive governments that believed the region faced a choice between Mecca and modernisation. Local businesses—particularly capital-intensive ones such as transport and manufacturing—were dominated by Jews and Christians who were allowed to opt out of Islamic law.

Mr Kuran’s arguments have broad implications for the debate about how to foster economic development. He demonstrates that the West’s long ascendancy was rooted in its ability to develop institutions that combined labour and capital in imaginative new ways. The Protestant work ethic and the scientific revolution no doubt mattered. But they may have mattered less than previously thought. People who want to ensure that economic development puts down deep roots in emerging societies would be well advised to create the institutional environment in which Thurlow’s soulless institutions can flourish.