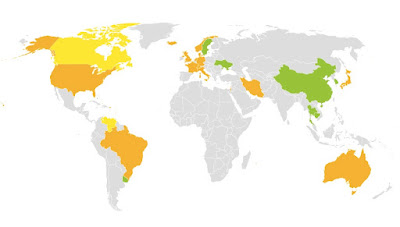 China piloted a national digital currency in April 2020. The European Central Bank has convened a working group of major economies to coordinate digital currency research and development. The U.S. Federal Reserve said it was in the early stages of researching the digital dollar. Spurred by the potential to modernize domestic payments systems, or take a leading role in updating the global payments infrastructure that supports cross-border trade and remittances, nations around the globe are exploring the merits and risks of issuing a digital currency. While many are in the early stages of research, central banks representing one-fifth of the world's population say they are likely to issue a digital currency very soon.
The Belfer Center’s Economic Diplomacy Initiative, in collaboration with the Atlantic Council’s Global Business and Economics Program, is tracking the latest developments in central bank issued digital currencies.

What is a Central Bank Digital Currency?

A Central Bank Digital Currency (CBDC), or national digital currency, is simply the digital form of a country’s fiat currency. Instead of printing paper bills and minting coins, the central bank issues electronic tokens, whose value is backed by the full faith and credit of the government.

But I haven't used cash in months. Isn't my money already digital?

True, deposits held in commercial banks today are already digital and can be moved around electronically using credit and debit cards and mobile payments apps. However, this form of digital money is the liability of private banks, who must maintain reserves and deposits. CBDCs are the liability of the government (like cash today), which means that the central bank would need to back them up.

How is this different from bitcoin?

Digital currencies can also be issued by private institutions. These may be centralized, i.e., issued and regulated by a single authority (but not the government), for example Facebook’s Libra. Or, they can be decentralized, like bitcoin. Today, about 3,000 privately issued digital currencies have a total market value of over $250 billion. Of these, bitcoin ($170 billion market cap), ethereum ($20 billion), and Ripple ($13 billion) are the three largest.
Decentralized digital currencies like bitcoin are often referred to as cryptocurrencies because of the underlying technology. They generally use distributed ledgers, which means that in the absence of a central authority, many devices maintain independent records of transaction activity and use consensus models to decide which copy is correct. Cryptocurrencies also employ a number of algorithms and cryptographic techniques to ensure that they are secure.

Why might a country want a national digital currency?

Central banks are still in the early stages of exploring the use cases for national digital currencies. According to the IMF, a key reason that advanced economies may be considering them is to counter the growth of private forms of digital money. Essentially, as users demand the convenience and low-cost of digital payments, governments may be asking the question, ‘if not us, then who?’ As these economies become increasingly cashless, apps like Venmo, WeChat, and M-Pesa are facilitating greater payments volumes, raising concerns about consumer protection, data privacy, and operational risks. Recent proposals like Facebook’s Libra currency may further encourage policymakers to explore a solution before users adopt an alternative over which the government has limited control. China’s recent digital currency pilot has introduced an element of great power competition too, since an early lead in technology development could allow China to dictate how the global payments infrastructure, which facilitates cross-border trade and remittances, evolves.
Meanwhile economists have argued that central bank digital currencies can improve market functioning. The BIS has stated that it can improve liquidity by allowing faster transaction speeds, while the Bank of England noted that it can boost GDP by up to 3% by lowering transaction costs. In many emerging economies, national digital currencies are primarily being considered as a means to increase financial inclusion, by allowing governments to include unbanked populations in the digital economy.

What are the risks?

There are many. National digital currencies could  give governments the capability to surveil users – good for tracking criminals, but a concern for the privacy of ordinary citizens. There may be implications for financial stability; for example, business models for banks and payments platforms would need to change if people are using government-provided digital cash. And, central banks would need to significantly ramp up their operational capabilities to manage a digital currency, from managing reserves and deposits, to protecting user privacy, preventing digital counterfeiting, and mitigating cyber attacks and other operational risks.

What are the geopolitical implications?

When bitcoin first hit the scene, the novelty was that no one was in charge – through a complex system of distributed ledgers, consensus protocols, and cryptography, the currency could exist in a peer-to-peer network with no central administrator. Some of the most promising digital currency projects today are very different. The Chinese government will manage the digital yuan, and Facebook is at the helm of Libra. Wide adoption of these or similar digital currency projects would place a lot more power in the hands of the currency operators, and away from the U.S. government.
What’s more, much of the global payments infrastructure today – like messaging, clearing, and settlement systems – are under the purview of U.S. authorities. If alternative systems were developed to support these digital currencies, the U.S. could lose the ability to monitor and regulate payments flows.
Here are just a few of the national security implications:
Sanctions: Few experts expect the U.S. dollar to lose its dominant status, but competing global currencies and payments infrastructure could reduce the impact of U.S. policies like economic sanctions, since adversaries could simply switch to a different currency.Illicit activities: Most digital currency transactions are unlikely to be anonymous, but U.S. authorities would need to coordinate with the Chinese government, Facebook officials, or other currency operators to gather information on illicit transactions.Data privacy: Digital currencies will ultimately generate a lot of data on how individuals spend their money, raising concerns about surveillance, data manipulation, and other privacy breaches.Data security: Digital currencies face security vulnerabilities like any other technology. Cyberattacks and security breaches could lead to stolen currency and personal data, and even bring economic activity to a standstill.
For more information on this publication: Belfer Communications Office
For Academic Citation: “National Digital Currencies: The Future of Money?.” Infographic & Chart, May 2020.