Picks from the Past:
American Museum Natural History, January 1974

The immutable laws of design set limits on all organisms. 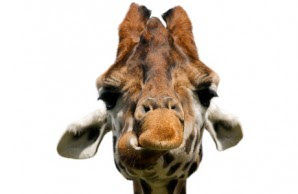 Who could believe an ant in theory? A giraffe in blueprint? Ten thousand doctors of what’s possible Could reason half the jungle out of being.

Poet John Ciardi’s lines reflect a belief that the exuberant diversity of life will forever frustrate man’s arrogant claims to omniscience. Yet, however much we celebrate diversity and revel in the peculiarities of animals, we must also acknowledge a striking “lawfulness” in the basic design of organisms. This regularity is most strongly evident in the correlation of size and shape.
Animals are physical objects. They are shaped to their advantage by natural selection. Consequently, they must assume forms best adapted to their size. The relative strength of such forces as gravity varies with size in a regular way, and animals respond by systematically altering their shapes.
The geometry of space itself is the major reason for correlations between size and shape. Simply by growing larger, an object that keeps the same shape will suffer a continual decrease in relative surface area. The decrease occurs because volume increases as the cube of length (length x length x length), while surface increases only as the square (length x length): in other words, volume grows more rapidly than surface.
Why is this important to animals? Many functions that depend upon surface must serve the entire volume of the body. Digested food passes to the body through surfaces; oxygen is absorbed through surfaces in respiration; the strength of a leg bone depends upon the area of its cross section, but the legs must hold up a body increasing in weight by the cube of its length. Galileo first recognized this principle in his “Discorsi” of 1638, the masterpiece he wrote while under house arrest by the Inquisition. He argued that the bone of a large animal must thicken disproportionately to provide the same relative strength as the slender bone of a small creature.
One solution to decreasing surface has been particularly important in the progressive evolution of large and complex organisms: the development of internal organs. The lung is, essentially, a richly convoluted bag of surface area for the exchange of gases; the circulatory system distributes material to an internal space that cannot be reached by direct diffusion from the external surface of large organisms; the villi of our small intestine increase the surface area available for absorption of food (small mammals neither have nor need them).
Some simpler animals have never evolved internal organs; if they become large, they must alter their entire shape in ways so drastic that plasticity for further evolutionary change is sacrificed to extreme specialization. Thus, a tapeworm may be 20 feet long, but its thickness cannot exceed a  fraction of an inch because food and oxygen must penetrate directly from the external surface to all parts of the body.
Other animals are constrained to remain small. Insects breathe through invaginations of the external surface. Since these invaginations must be more numerous and convoluted in larger bodies, they impose a size limit upon insect design: at the size of even a small mammal, an insect would be “all invagination” and have no room for internal parts.
We are prisoners of the perceptions of our size, and rarely recognize how different the world must appear to small animals. Since our relative surface area is so small at our large size, we are ruled by gravitational forces acting upon our weight. But gravity is negligible to very small animals with high surface to volume ratios; they live in a world dominated by surface forces and judge the pleasures and dangers of their surroundings in ways foreign to our experience.
An insect performs no miracle in walking up a wall or upon the surface of a pond; the small gravitational force pulling it down or under is easily counteracted by surface adhesion. Throw an insect off the roof and it floats gently down as frictional forces acting upon its surface overcome the weak influence of gravity.
The relative weakness of gravitational forces also permits a mode of growth that large animals could not maintain. Insects have an external skeleton and can only grow by discarding it and secreting a new one to accommodate the enlarged body. For a period between shedding and regrowth, the body must remain soft. A large mammal without any supporting structures would collapse to a formless mass under the influence of gravitational forces; a small insect can maintain its cohesion (related lobsters and crabs can grow much larger because they pass their “soft” stage in the nearly weightless buoyancy of water). We have here another reason for the small size of insects.
The creators of horror and science-fiction movies seem to have no inkling of the relationship between size and shape. These “expanders of the possible” cannot break free from the prejudices of their perceptions. The small people of Dr. Cyclops, The Bride of Frankenstein, The Incredible Shrinking Man, and Fantastic Voyage behave just like their counterparts of normal dimensions. They fall off cliffs or down stairs with resounding thuds; wield weapons and swim with olympic agility. The large insects of films too numerous to name continue to walk up walls or fly even at dinosaurian dimensions.
Página 2 de 2
Picks from the Past: January 1974

The immutable laws of design set limits on all organisms.

By Steven Jay Gould
When the kindly entomologist of Them discovered that the giant queen ants had left for their nuptial flight, he quickly calculated this simple ratio: a normal ant is a fraction of an inch long and can fly hundreds of feet; these ants are many feet long and must be able to fly as much as 1,000 miles. Why, they could be as far away as Los Angeles! (Where, indeed, they were, lurking in the sewers.) But the ability to fly depends upon the surface area of the wings, while the weight that must be borne aloft increases as the cube of length. We may be sure that even if the giant ants had somehow circumvented the problems of breathing and growth by molting, their chances of getting off the ground would have been far worse than that of the proverbial snowball in hell.
Other essential features of organisms change even more rapidly with increasing size than the ratio of surface to volume. Kinetic energy, for example, increases as length raised to the fifth power. If a child half your height falls unsupported to the ground, its head will hit with not half, but only 1/32 the energy of yours in a similar fall. A child is protected more by its size than by a “soft” head. In return, we are protected from the physical force of its tantrums, for the child can strike with, not half, but only 1/32 of the energy we can muster. I have long had a special sympathy for the poor dwarfs who suffer under the whip of cruel Dr. Alberich in Wagner’s “Das Rheingold.” At their diminutive size, they haven’t a chance of extracting, with mining picks, the precious minerals that Alberich demands, despite the industrious and incessant leitmotif of their futile attempt.
This simple principle of differential scaling with increasing size may well be the most important determinant of organic shape. J.B.S. Haldane once wrote that “comparative anatomy is largely the story of the struggle to increase surface in proportion to volume.” Yet its generality extends beyond life, for the geometry of space constrains ships, buildings, and machines, as well as animals. 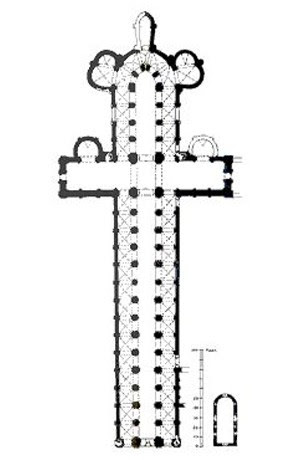 The great range of designs among medieval churches can be attributed partly to size. The twelfth-century parish church of Little Tey, Essex, England, was only 57 feet long and had a simple floor plan (lower right corner). The floor plan of Norwich Cathedral, also twelfth century, shows adaptations—transept, chapels—required for the 450-foot-long building. The need for light and support dictated complex cathedral layouts.
Medieval churches present a good testing ground for the effects of size and shape, for they were built in an enormous range of sizes before the invention of steel girders, internal lighting, and air conditioning permitted modern architects to challenge the laws of size. The tiny, twelfth-century parish church of Little Tey, Essex, England, is a broad, simple rectangular building with a semicircular apse. Light reaches the interior through windows in the outer walls. If we were to build a cathedral simply by enlarging this design, then the periphery of the outer walls and windows would increase as length, while the area that light must reach would increase as length times length. In other words, the size of the windows would increase far more slowly than the area that requires illumination. Candles have limitations; the inside of such a cathedral would have been darker than the deed of Judas. Medieval churches, like tapeworms, lack internal systems and must alter their shape to produce more external surface as they are made larger.
The large cathedral of Norwich, as it appeared in the twelfth century, had a much narrower rectangular nave; chapels have been added to the apse and a transept runs perpendicular to the main axis. All these “adaptations” increase the ratio of external wall and window to internal area. It is often stated that transepts were added to produce the form of a Latin cross. Theological motives may have dictated the position of such “outpouchings,” but the laws of size required their presence. Very few small churches have transepts.
I have plotted periphery versus the square root of area for floor plans of all postconquest Romanesque churches depicted in Clapham’s monograph of English ecclesiastical architecture. As we would predict, periphery increases more rapidly than the square root of area. Medieval architects had their rules of thumb, but they had, so far as we know, no explicit knowledge of the laws of size.
Like large churches, large organisms have very few options open to them. Above a certain size, large terrestrial organisms look basically alike—they have thick legs and relatively short, stout bodies. Large Romanesque churches are all relatively long and have abundant outpouchings. The invention of the flying buttress strengthened later Gothic buildings and freed more wall space for windows. Churches could then become relatively wider and simpler in outline (as in the Cathedral of Bourges).
The “invention” of internal organs helped animals retain the highly successful shape of a simple exterior enclosing a large internal volume; and the invention of internal lighting and structural steel has helped modern architects design large buildings with simple exteriors. The limits are expanded, but the laws still operate. No large Gothic church is higher than it is long, no large animal has a sagging middle like a dachshund.
I once overheard a children’s conversation in a New York playground. Two young girls were discussing the size of dogs. One asked: “Can a dog be as large as an elephant?” Her friend responded: “No, if it were as big as an elephant, it would look like an elephant.” I wonder if she realized how truly she spoke.
Postado por Paulo Roberto de Almeida às 04:05