The Evolution of Civilizations: An Introduction to Historical Analysis, by Carrol Quigley 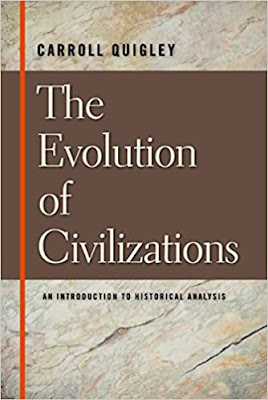 The Evolution of Civilizations: An Introduction to Historical Analysis

Carroll Quigley was a legendary teacher at the Georgetown School of Foreign Service. His course on the history of civilization was extraordinary in its scope and in its impact on students.

Like the course, The Evolution of Civilizations is a comprehensive and perceptive look at the factors behind the rise and fall of civilizations. Quigley examines the application of scientific method to the social sciences, then establishes his historical hypotheses. He poses a division of culture into six levels from the abstract to the more concrete. He then tests those hypotheses by a detailed analysis of five major civilizations: the Mesopotamian, the Canaanite, the Minoan, the classical, and the Western.

Quigley defines a civilization as “a producing society with an instrument of expansion.” A civilization’s decline is not inevitable but occurs when its instrument of expansion is transformed into an institution—that is, when social arrangements that meet real social needs are transformed into social institutions serving their own purposes regardless of real social needs.

Matthias Goertz
2.0 out of 5 stars Attempt at a philosophy of history by a non-philosopher and non-historian

Reviewed in the United States on December 9, 2018

Verified Purchase
The "seven ages of man" here become the seven stages of the evolution of civilisations. Quigley's method is analytical (analysis = "breaking up"), in that it parcels up the continuum of historical evolution beyond the usual stages of "rise" and "decline and fall" (Gibbon), but not "scientific," certainly not by the definition of "scientific" he himself proposes (cf. p.33): if the "scientific" method involves gathering of "all the relevant evidence," he fails to do so, analysing as he does only a fairly limited subset of all the "civilisations" he himself lists (a list that itself surely only comprises a subset of civilisations that have actually existed). Rather than being "scientific," his approach is rationalist, which, it so happens, is precisely that metaphysics which he evidently despises most (cf. pp. 38, 337). For a budding philosopher of history, he gets his philosophy awfully wrong. His curious definition of the Russian "civilisation" as separate from the "Western" is perhaps excusable by Quigley's personal historical context (the book was first published in 1961), although it must be said that the mark of a historian must be, inter alia, that he can lift his head above his immediate context. More generally Quigley's grasp of history is probably nearly as limited as that of philosophy (he reduces, for example, the Napoleonic Wars to a conflict between France and Britain--never mind what those poor underrated Germans, Russians, Italians, Spanish, Poles, Dutch and countless other peoples may think of it, on whose lands those wars took place, fought by their peoples). Having said that, the one chapter in his book I found eminently readable is the one in which Quigley puts his "scientific" method aside and simply retells history, in a grand sweep, no doubt, but in a way that makes interesting connections: Chapter 6, "The Matrix of Early Civilisations," which in some ways anticipates Jared Diamond's on the whole more intriguing analysis. One "star" for making an honest attempt, and a second "star" for Chapter 6.
4.0 out of 5 stars A honest and strong intellectual effort to create a framework for history analysis on a grand scala

Reviewed in the United States on September 30, 2012

Verified Purchase
Let me repeat a short part from the Conclusion of the book: "To know is not too demanding: it merely requires memory and time. But to understand is quite a different matter: it requires intellectual ability and training, a self-conscious awareness of what one is doing, experience in techniques of analysis and synthesis, and above all, perspective." I'm not a professional historian but I can see that Quigley had put a very honest intellectual effort in order help bring a perspective to the readers who want to understand the history of civilizations. He puts his framework into test by trying to explain the major phases of many civilizations and he seems to have achieved a consistent set of explanations. Moreover, he does this without being dry, the whole book is an exciting read and feels like listening to a good professor who seems to have a deep understanding and knowledge of his subject matter. Nevertheless, there are still many open questions regarding the evolution of civilizations, such as: is it really possible to explain and predict many events by focusing on weapons technology? Why the difference between civilizations between different times, etc?The book has other drawbacks, especially the explanations about linguistics, but I think they can be tolerated, after all it was written about 50 years ago. We have learned a lot since then but it's a pity that we do not see more people like Quigley; people who can write really good books on big topics without being drown in details, and people who can defend a strong framework for analyzing grand structures throughout long periods of time.
Kenneth J. Dillon
5.0 out of 5 stars History through a Scientist's Eyes
Reviewed in the United States on May 6, 2008
Verified Purchase
I am a professional historian and one-time student of Carroll Quigley. Rereading "The Evolution of Civilizations" after 40 years, I heard his voice speaking across time and felt once again the uncanny penetration of his analytical mind. I suppose that he was the most remarkable person I have ever met.This book makes a major contribution to the study of civilizations, previously the preserve of writers of a literary or philosophical bent. Quigley was through and through a scientist who strove to analyze the rise and fall of civilizations and develop explanations of their dynamics that went well beyond the descriptive treatments of Toynbee and others.Quigley's seven stages of the rise and fall of civilizations, his six dimensions of analysis (military, political, economic, social, religious, and intellectual), and his application of the concept of institutionalization of once-productive "instruments" of society to explaining the stages of Expansion and Conflict are superior to any competing framework of analysis I have encountered. They deserve careful scrutiny for what they can tell us about the interaction of civilizations in our globalizing world.I found especially interesting Quigley's analysis of how climate change shaped prehistorical population movements, his discussion of the philosophical struggles of classical antiquity, and his explanation of the economic factors driving European expansion and conflict.That this book has never received much attention from professional historians should not surprise us. Quigley was operating in a mode that led him to diverge from the mainstream and to upset more than a few specialists.While this book certainly contains high value for students of world history, its teachings can be applied in other fields as well. I have found the analytical techniques and the explanation of science and epistemology in this book repeatedly fruitful in my own historical, scientific, and criminal detective work.For more on Quigley, try a Google or Yahoo search under "Carroll Quigley: Theorist of Civilizations".
Posted by Paulo Roberto de Almeida at 17:12