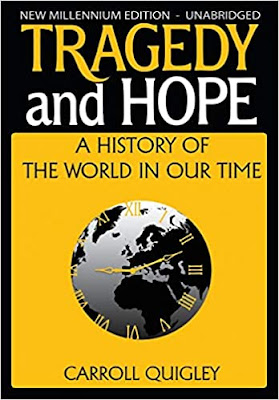 UNCENSORED! Tragedy & Hope: A History of the World in Our Time by Carroll Quigley is the ultimate insider admission of a secret global elite that has impacted nearly every modern historical event. Learn how the Anglo-American banking elite were able to secretly establish and maintain their global power. This massive book provides a detailed world history beginning with the industrial revolution and imperialism through two world wars, a global depression and the rise of communism. Tragedy & Hope is the definitive work on the world's power structure and an essential source material for understanding the history, goals and actions of the New World Order.

ORIGINAL BOOK DESCRIPTION: TRAGEDY AND HOPE shows the years 1895-1950 as a period of transition from the world dominated by Europe in the nineteenth century to the world of three blocs in the twentieth century. With clarity, perspective, and cumulative impact, Professor Quigley examines the nature of that transition through two world wars and a worldwide economic depression. As an interpretative historian, he tries to show each event in the full complexity of its historical context. The result is a unique work, notable in several ways. It gives a picture of the world in terms of the influence of different cultures and outlooks upon each other; it shows, more completely than in any similar work, the influence of science and technology on human life; and it explains, with unprecedented clarity, how the intricate financial and commercial patterns of the West prior to 1914 influenced the development of today's world.

Top reviews from the United States

Barry P. Dixon
5.0 out of 5 stars The book powerful influences didn't want published.
Reviewed in the United States on October 31, 2015
Verified Purchase
This tome reveals the inner workings and machinations of leaders in each country and how they worked behind the scenes to control the operations of the country politically and economically. Great read. The book was so revealing that after it was published and started to become popular the publisher stopped publishing it and suppressed the book. You will see how Quigley by accident uncovered what the insiders did not want to be revealed.
15 people found this helpful
Helpful
Report abuse
Steve Kempf
5.0 out of 5 stars Conspiracy Theories
Reviewed in the United States on April 21, 2021
Verified Purchase
Most readers quote from this book to illuminate the ideas that the Illuminati and more importantly baking institutions really run both the U.S. government and the world. However, the reader must take the time to read the whole book. Dr. Carroll Quigley wrote a book for the ages and especially with its focus on the first half of the 20th century. The book was written in 1966 and Dr. Carroll Quigley died in 1977, but his theories on the economic policies on the West in such countries as the United States, Great Britain, France, and Nazi Germany were fascinating to me. I have to admit that in some cases, the man was so brilliant that I did not understand all the subject material in his book. I can honestly write that he was a great historian who loved to write history books, and teach, which came out in his book. Rest In Peace (R.I.P.) to Dr. Carroll Quigley!
Posted by Paulo Roberto de Almeida at 17:17

Enviar por e-mailPostar no blog!Compartilhar no TwitterCompartilhar no FacebookCompartilhar com o Pinterest
Labels: book, Carroll Quigley, Tragedy and Hope: A History of the World in Our Time