In November 1916, a young Afro-Brazilian musician named Donga registered sheet music for the song "Pelo telefone" ("On the Telephone") at the National Library in Rio de Janeiro. This apparently simple act—claiming ownership of a musical composition—set in motion a series of events that would shake Brazil's cultural landscape. Before the debut of "Pelo telephone," samba was a somewhat obscure term, but by the late 1920s, the wildly popular song had helped to make it synonymous with Brazilian national music.
The success of "Pelo telephone" embroiled Donga in controversy. A group of musicians claimed that he had stolen their work, and a prominent journalist accused him of selling out his people in pursuit of profit and fame. Within this single episode are many of the concerns that animate Making Samba, including intellectual property claims, the Brazilian state, popular music, race, gender, national identity, and the history of Afro-Brazilians in Rio de Janeiro. By tracing the careers of Rio's pioneering black musicians from the late nineteenth century until the 1970s, Marc A. Hertzman revises the histories of samba and of Brazilian national culture.

Marc A. Hertzman is Assistant Professor of Latin American and Iberian Cultures and Director of the Center for Brazilian Studies at Columbia University. 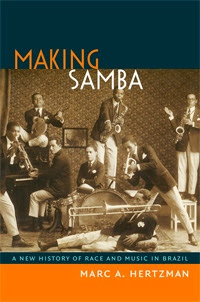