A narrow, tainted election victory is a fitting epitaph for his rotten predecessor. But Venezuela is on the brink 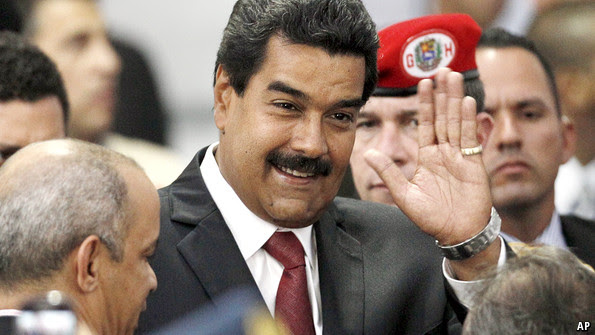 HUGO CHÁVEZ has been dead for more than a month, but visitors to Caracas could be forgiven for thinking that Venezuela’s bombastic former president was still alive and in power. His image plasters the streets; his speeches fill the airwaves. The blitz was ordered by his anointed successor, Nicolás Maduro, to harness Chávez’s popularity in order to win a landslide in an election on April 14th. The plan failed.
Six months ago Chávez romped to a third term with a cushion of 11 percentage points. Polls had predicted that Mr Maduro (pictured) would repeat the feat, riding a wave of chavistasympathy. Instead he won by less than 2%, and then only after flagrantly breaking electoral rules. The result demonstrates that, without Chávez at the helm, chavismo, a noxious cocktail of populism, incompetence and repression, is a far less potent force. That is the good news. The bad news is that Venezuela’s already polarised society is now split down the middle, and seething. The country could unravel unless Mr Maduro steers a responsible course. It is far from clear that he will.
In this section
Reprints
Related topics
Henrique Capriles, the centrist who came second in the polls, demands a recount. During the campaign Mr Maduro enjoyed untrammelled freedom to bore viewers rigid on state television. More serious alleged breaches of electoral rules include the use of fake IDs and intimidation at polling stations. Appeals are likely to fall on deaf ears, because the electoral authority is among the institutions that lost their independence during Chávez’s 14 years in power. As Mr Maduro whipped up hysteria against the “fascist” opposition, Mr Capriles wisely called off a big rally for fear that, with seven already dead, violence would spread. There are already worrying signs that the government is ramping up repression.
There is at least some justice that the mess created during the Chávez years now falls to a fellow chavista. The economy is in ruins. Growth has stalled, the currency is digesting a 32% devaluation in February and inflation is likely to reach 30%. Price controls, the expropriation of farms and anti-business policies have created food shortages. The appearance in Caracas of sugar or cooking oil can create queues and excitement otherwise seen only in Cuba.
Chávez loyalists, of whom there are many millions, will tell Mr Maduro to be more chavista: more populist, more profligate, more authoritarian. He has already aped his predecessor, and fawned on his memory, to the point of parody. Describing Chávez as a “Christ of the Americas”, he referred to the election as “Resurrection Day”.
Yet chavismo’s bill is now due. Last year the budget deficit was 8.5% of GDP. Even with oil at over $100 a barrel, Venezuela’s public spending is unsustainable. Power cuts are frequent and roads are crumbling. Under an ineffective police force, the murder rate has soared to twice that of Mexico.
Reap what you sow
Now is the time for Mr Maduro to unite his country, not crush dissent. He should agree to recount the ballots. The state’s institutions, above all the judiciary and armed forces, need to regain their neutrality. And the weak economy will grow only if the government seeks rapprochement with the private sector and scraps controls on prices and foreign exchange. Mr Maduro’s tainted, wafer-thin victory suggests that Venezuelans want less chavismo, not more. That is certainly what their unfortunate country needs.
From the print edition: Leaders
Postado por Paulo Roberto de Almeida às 12:11