The End of Affirmative Action? - The Economist

Governments should be colour-blind 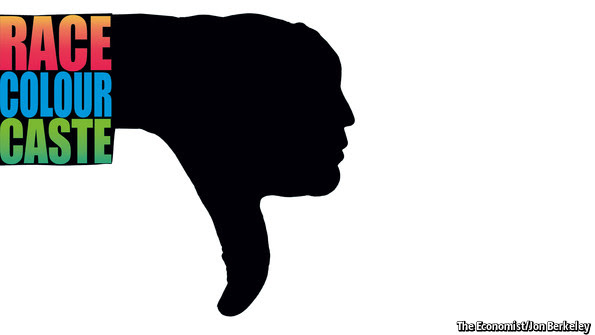 ABOVE the entrance to America’s Supreme Court four words are carved: “Equal justice under law”. The court is pondering whether affirmative action breaks that promise. The justices recently accepted a case concerning a vote in Michigan that banned it, and will soon rule on whether the University of Texas’s race-conscious admissions policies are lawful. The question in both cases is as simple as it is divisive: should government be colour-blind?
America is one of many countries where the state gives a leg-up to members of certain racial, ethnic, or other groups by holding them to different standards. The details vary. In some countries, the policy applies only to areas under direct state control, such as public-works contracts or admission to public universities. In others, private firms are also obliged to take account of the race of their employees, contractors and even owners. But the effects are strikingly similar around the world (see article).


In this section
Reprints
Related topics
The burden of history
Many of these policies were put in place with the best of intentions: to atone for past injustices and ameliorate their legacy. No one can deny that, for example, blacks in America or dalits in India (members of the caste once branded “untouchable”) have suffered grievous wrongs, and continue to suffer discrimination. Favouring members of these groups seems like a quick and effective way of making society fairer.
Most of these groups have made great progress. But establishing how much credit affirmative action can take is hard, when growth also brings progress and some of the good—for example the confidence-boosting effect of creating prominent role models for a benighted group—is intangible. And it is impossible to know how a targeted group would have got on without this special treatment. Malays are three times richer in Singapore, where they do not get preferences, than in next-door Malaysia, where they do. At the same time, the downside of affirmative action has become all too apparent.
Awarding university places to black students with lower test scores than whites sounds reasonable, given the legacy of segregation. But a study found that at some American universities, black applicants who scored 450 points (out of 1,600) worse than Asians on entrance tests were equally likely to win a place. That is neither fair on Asians, nor an incentive to blacks to study in high school. In their book “Mismatch”, Richard Sander and Stuart Taylor produce evidence that suggests affirmative action reduces the number of blacks who qualify as lawyers by placing black students in law schools for which they are ill-prepared, causing many to drop out. Had they attended less demanding schools, they might have graduated.
Although the groups covered by affirmative action tend to be poorer than their neighbours, the individuals who benefit are often not. One American federal-contracting programme favours businesses owned by “socially and economically disadvantaged” people. Such people can be 87 times richer than the average American family and still be deemed “disadvantaged” if their skin is the right colour. One beneficiary of South Africa’s programme of “Black Economic Empowerment” is worth an estimated $675m; he is also the deputy president of the ruling party. Letting members of certain groups charge more and still win public contracts is nice for the few who own construction firms; less so for the many who rely on public services. The same goes for civil-service quotas. When jobs are dished out for reasons other than competence, the state grows less competent, as anyone who has wrestled with Indian or Nigerian officialdom can attest. Moreover, rules favouring businesses owned by members of particular groups are easy to game. Malaysians talk of “Ali-Baba” firms, where Ali (an ethnic Malay) lends his name, for a fee, to Baba (a Chinese businessman) to win a government contract.
Although these policies tend to start with the intention of favouring narrow groups, they spread as others clamour to be included. That American federal programme began by awarding no-bid contracts to firms owned by blacks, Hispanics and Native Americans; now it covers people with ancestry from at least 33 countries. In India 60% of the population are eligible for privileges as members of scheduled castes, tribes or “other backward classes”. Such policies poison democracy by encouraging divisions along lines drawn by discriminatory rules. The anger thus stoked has helped stir bloody conflicts in India, Rwanda and Sri Lanka. And such rules, once in place, are almost impossible to get rid of. In 1949 India’s constitution said quotas should be phased out in ten years, but they are now more widespread than ever. America’s policies have survived decades of legal pushback, though not unscathed.
The content of their character
The University of Texas (UT) justifies discriminating in favour of black people not on the ground that society owes it to them, but because, it claims, a diverse university offers a better education to all its students. That is a reasonable argument—some companies benefit from understanding a variety of customers, for instance, and the police probably keep order better if enough of them share a culture with the neighbourhood they patrol—but it does not wash for most institutions. In UT’s case, although colleges benefit from a diversity of ideas, to use skin colour as a proxy for this implies that all black people and all Chinese people view the world in a similar way. That suggests a bleak view of the human imagination.
Universities that want to improve their selection procedures by identifying talented people (of any colour or creed) from disadvantaged backgrounds should be encouraged. But selection on the basis of race is neither a fair nor an efficient way of doing so. Affirmative action replaced old injustices with new ones: it divides society rather than unites it. Governments should tackle disadvantage directly, without reference to race. If a school is bad, fix it. If there are barriers to opportunity, remove them. And if Barack Obama’s daughters apply to a university, judge them on their academic prowess, not the colour of their skin.
Postado por Paulo Roberto de Almeida às 03:49