Perhaps you've read that America's debt burden is no longer a problem. Former White House economist Larry Summers says the U.S. should borrow even more money today because interest rates are low, and his Keynesian brethren are busy trying to discredit economists Kenneth Rogoff and Carmen Reinhart for their famous claim that a country's economic growth begins to fall when debt hits 90% of GDP. Time for Stimulus 5.0!
The Reinhart-Rogoff duo have admitted a math error while defending their core argument, though we've never considered their 90% figure to be dogma. Their main contribution was to remind politicians amid the post-crisis Keynesian spending blowout that public debt isn't a free lunch. It has to be repaid, which means a country must either spend less, tax more, grow faster, repudiate the debt or inflate it away.
The Keynesians are attacking Reinhart-Rogoff with such vitriol now precisely so they can rev up the spending engines once again. In their economic model, more government spending equals more GDP. So governments must keep spending more no matter what they spend it on. 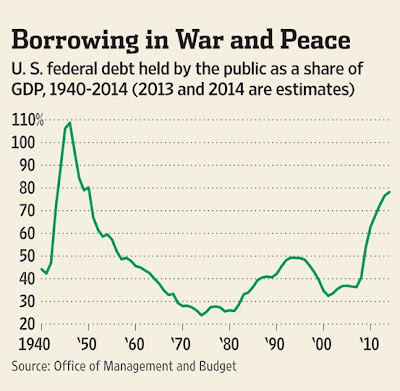 This isn't how these columns, or the classical economic models we follow, think about debt and growth. In our model, every dollar of government spending has to come from somewhere, which means it is either taxed or borrowed from the private economy. Thus the crucial issue isn't merely the level of debt, though at some point that can become a problem. The important matter is what that additional debt is buying.
The nearby chart shows U.S. federal debt held by the public as a share of GDP since the beginning of World War II. Debt soared to well above 100% of GDP during the war, but few thought defeating Hitler and Tojo was a bad investment. Once victory was attained, the debt ratio fell rapidly along with government spending. Private growth resumed despite Keynesian predictions of doom at the time as government spending fell, and debt as a share of GDP continued its gradual decline.
The next big debt burst came in the 1980s, as the Reagan Administration sought to break both the Soviets abroad and stagflation at home. The cure was a tax cut plus more defense spending, which in the short term led to higher deficits. Even then the peak Reagan deficit was only 6% of GDP in 1983, compared to President Obama's first term deficit average of 8.7%.
The key point is that those deficits were buying faster growth and defense goods such as aircraft carriers that would win the Cold War. As rapid economic growth returned, deficits and debt both declined. And when the Soviets surrendered, the Clinton Administration was able to cut (too rapidly) defense spending to 3% of GDP in 2000 from 4.8% in 1992. Modest deficits returned as President Bush cut taxes and boosted defense spending after 9/11. But debt as a share of GDP was still only 40.5% of GDP as recently as the first recession year of 2008.
Contrast that experience with where we are today. President Obama's stimulus spree and the mediocre recovery have doubled the debt to an estimated 76.6% of GDP this year. This is despite a record tax increase in January. The Administration now says the debt to GDP ratio will peak in 2014 at 78.2%, but that will be true only if spending growth slows and economic growth is more rapid.
One reason to be more worried about debt now is what we're borrowing to finance. Spending on wars eventually ends. But today most spending by far goes to social welfare payments and entitlements that are difficult to reduce. Those payments are only going to increase as the baby boomers retire, and as ObamaCare takes effect.
These income transfers spread the wealth but they do nothing to increase the growth of the economy. To the extent that they are financed by higher taxes, they retard growth by taking money that would be invested more productively in the private economy.
Mr. Summers says governments should borrow more now at near-zero interest rates to invest in future growth. But this is what we were told in 2009-2010, when Mr. Summers was in the White House, and the $830 billion stimulus was used to finance not primarily roads or bridges but more unionized teachers, higher transfer payments, and green-energy projects that have since failed. Why will it be different this time?
Another reason to reduce debt today is to create some breathing room if we have another recession or an emergency such as a war. At least going into the 2008 financial panic, the U.S. had room to borrow. The Obama era has blown out the U.S. balance sheet, and it will take many years to restore it to that pre-crisis level.
***
Where we agree with at least some Keynesians is that the main policy goal now should be faster economic growth rather than rapid debt reduction. Where we disagree is how to promote that growth. The Keynesians are now using a false choice between "austerity" and growth to justify more of the government spending they think drives economic prosperity. The brawl over Reinhart-Rogoff is thus less a serious economic debate than it is a political exercise to turn more of the private economy over to government hands.
After five years of trying, we should know this doesn't work. The real way to promote a stronger economy is more austerity and reform in government, and fewer restraints on private investment and risk taking.
Postado por Paulo Roberto de Almeida às 08:29