The curious tale of the stolen books
By Martin VennardBBC World Service, 24 April 2013 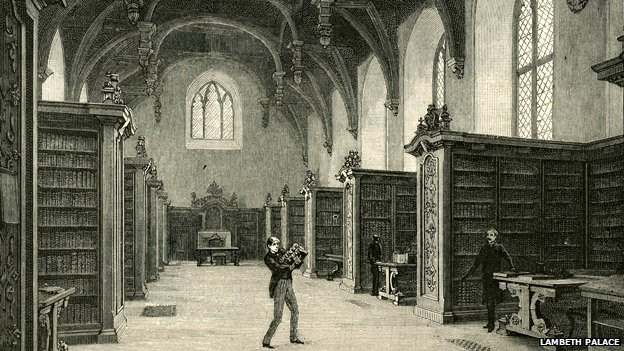 London's Lambeth Palace, home to the Archbishop of Canterbury, also has a leading historic book collection. The palace's library was the scene of a major crime that stayed undiscovered for decades.
A sealed letter that arrived at one of Britain's most historic libraries in February 2011 was to leave its staff stunned.
The letter had been written before his death by a former employee of Lambeth Palace Library. Forwarded shortly after he died by the man's solicitor, it revealed the whereabouts of many of the library's precious books.
Staff had known since the mid-1970s that dozens of its valuable books had been stolen. But they had no idea of the true extent of the losses until the letter led them to the man's house in London.
Continue reading the main story

"We were staggered," says Declan Kelly, director of libraries and archives for the Church of England. "A couple of my colleagues climbed into the attic. It was piled high to the rafters with boxes full of books. I had a list of 60 to 90 missing books, but more and more boxes kept coming down."
They contained some 1,000 volumes, made up of 1,400 publications, many from the collections of three 17th century archbishops of Canterbury - John Whitgift, Richard Bancroft and George Abbot.
They included an early edition ofShakespeare's Henry IV Part Two, finely illustrated books - such as Theodor de Bry's America, which chronicles the earliest expeditions to the New World - and medical books, such as The French Chirurgerye.
"The scale of the theft is quite extraordinary," says Robert Harding, director of Maggs Bros, a London rare book dealer. "It's one of the biggest such thefts in recent decades."
Harding says that if undamaged, the copy of de Bry's America could be worth £150,000, while the Shakespeare would be worth about £50,000. He says others are also worth five-figure sums.
One of the most intriguing aspects of the case is how a member of staff was able to get away with stealing so many valuable and often large books.
During World War II, Lambeth Palace's Great Hall - which housed much of the library's early collection - took a direct hit from an incendiary bomb.
It was roughly estimated that up to 10,000 books were destroyed or badly damaged. In the years after, if a book was discovered to be missing it was easy to assume it had been destroyed in the war.
Continue reading the main story 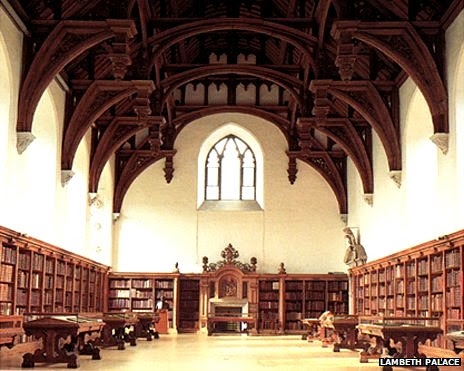 Founded in 1610, Lambeth Palace's library is the principal repository of the Church of England's documentary history and houses more than 120,000 books
Continue reading the main story
1/5
But early in 1975 the then librarian noticed that some of the most important books which were known to have survived, including the Shakespeare, had been taken.
The thief had also removed the index cards of the books, making it even more difficult to work out exactly what had been stolen. It was concluded that it was a matter of just tens of books.
"The police did an investigation and interviewed all the staff, but drew a blank and nothing from the library had ever come up for sale in the book trade," Kelly says.
Security was reviewed at the library in 1975 and in 2011.
Continue reading the main story

Prof James Carley, a Canadian academic, has been researching the history of the library. "In the 1970s it was very easy. There were no [detector] devices, nothing to stop you walking out with a book," he says.
London-based antiquarian bookseller Tim Bryars says: "It would take years to do it one or two books at a time, but it would have been much easier if he had the keys and took significant quantities at a time.
"There would have been a great deal of confusion for some time after the war. It could have happened when the books were being stored in the crypt."
The trail stayed cold for more than 35 years until the arrival of the letter.
Even though the true extent of the thief's exploits was discovered more than two years ago, it is only now being made public. "We've delayed quite a while telling the story because we wanted to get to the point where we can start to make the books available again," Kelly says.

He declines to say anything about the identity of the thief. "He was a former low-level employee. I don't think he was there for that long after the theft was discovered.
"We don't want to cause any distress to anyone still alive and connected with the thief. We want to look forward, not back."
But Bryars has another theory. "I can understand why they didn't reveal his name as there are other people out there who have stolen similar material, who if they saw someone else being named and shamed - even posthumously - that material could be for the bonfire," he says.
Continue reading the main story

The thief's true motives have also gone to the grave with him, but the fact that he damaged so many of the books provides a clue. He had removed or tried to remove marks of ownership using chemicals, cut off the coat of arms of the archbishops from covers and removed the bindings from some books.
"The fact they were defaced suggests he was intending to sell them. He may have had a go and been questioned and given up. The fantasy of the secret collector who wants to gloat over his private collection is not common in reality," Harding says.
Some of the stolen books are still missing. The thief removed index cards for the books he stole and these were found at his house. But not all the corresponding books were recovered. The remainder may have been sold.
"Damage affects the value a lot. A book without the arms may have lost 90% of its value. It's cultural vandalism," Harding adds.
Carley says the thief appeared to be interested in books and this may have saved them. "I think he just decided at the end of the day that he couldn't destroy them, so why not give them back?"
Some 10% of the retrieved books have now been repaired and 40% of them have been entered in the library's online catalogue.
"It's great to have this stuff back and scholars and others can now access them to see what was available to people at the time to inform themselves," Kelly says. 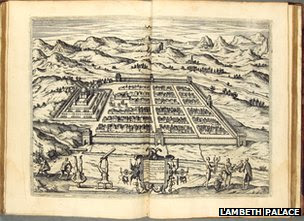