Economic Freedom of the World

The foundations of economic freedom are personal choice, voluntary exchange, and open markets. As Adam Smith, Milton Friedman, and Friedrich Hayek have stressed, freedom of exchange and market coordination provide the fuel for economic progress. Without exchange and entrepreneurial activity coordinated through markets, modern living standards would be impossible.
Potentially advantageous exchanges do not always occur. Their realization is dependent on the presence of sound money, rule of law, and security of property rights, among other factors. Economic Freedom of the World seeks to measure the consistency of the institutions and policies of various countries with voluntary exchange and the other dimensions of economic freedom. The report is copublished by the Cato Institute, the Fraser Institute in Canada and more than 70 think tanks around the world. 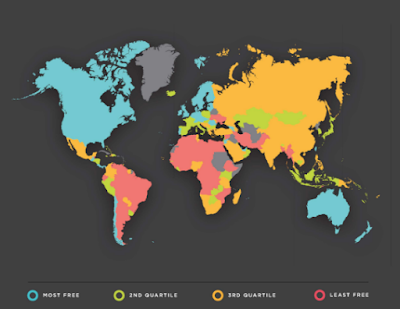 Global economic freedom increased slightly in this year’s report to 6.85. Hong Kong and Singapore retain the top two positions with a score of 9.03 and 8.71 out of 10, respectively. The rest of this year’s top scores are New Zealand, 8.35; Switzerland, 8.25; Canada, Georgia, Ireland, Mauritius, and the United Arab Emirates at 7.98; and Australia and the United Kingdom at 7.93.
The United States, once considered a bastion of economic freedom, ranks 16th for a second consecutive year with a score of 7.75. Due to a weakening rule of law, increasing regulation, and the ramifications of wars on terrorism and drugs, the United States has seen its economic freedom score plummet in recent years, compared to 2000 when it ranked second globally.
The rankings of other large economies in this year’s index are Germany (30th), Japan (40th), South Korea (42nd), France (57th), Italy (69th), Mexico (88th), Russia (102nd), India (112th), China (113th), and Brazil (124th).
Nations in the top quartile of economic freedom had an average per capita GDP of US$41,228 in 2014, compared to US$5,471 for bottom quartile nations. Moreover, the average income of the poorest 10% in the most economically free nations is about twice the overall average income in the least free nations. Life expectancy is 80.4 years in the top quartile compared to 64.0 years in the bottom quartile, and political and civil liberties are considerably higher in economically free nations than in unfree nations.
The first Economic Freedom of the World Report, published in 1996, was the result of a decade of research by a team which included several Nobel Laureates and over 60 other leading scholars in a broad range of fields, from economics to political science, and from law to philosophy. This is the 20th edition of Economic Freedom of the World and this year’s publication ranks 159 countries and territories for 2014, the most recent year for which data are available.
Contents:
Table of Contents [pdf, 534Kb]
Executive Summary [pdf, 582Kb]
Chapter 1, Economic Freedom of the World in 2014 [pdf, 1001Kb]
Chapter 2, Country Data Tables [pdf, 1.38Mb]
Chapter 3, Gender Disparity in Legal Rights and Its Effect on Economic Freedom [pdf, 685Kb]
Chapter 4, The Critical Role of Economic Freedom in Venezuela’s Predicament [pdf, 820Kb]
Chapter 5, Economic Freedom and Growth in Ireland, 1980 to 2014 [pdf, 873Kb]
Chapter 6, Economic Freedom in the United States, 1980 to the Present [pdf, 727Kb]
Appendix [pdf, 635Kb]
Acknowledgments [pdf, 738Kb]
Posted by Paulo Roberto de Almeida at 23:51