Mercosur: At the Mercy of Other Markets - Diego Solis (Stratfor)

Mercosur: At the Mercy of Other Markets
Diego Solis
Analysis SEPTEMBER 13, 2016
(Stratfor)

Summary
Editor's Note: This is the second installment of a seven-part series examining how the world's regional economic blocs are faring as the largest of them — the European Union — continues to fragment.

The Common Market of the South, better known by its Spanish acronym Mercosur, emerged in the early 1990s as a small bloc with a big goal: to ease the movement of people and goods throughout South America. The continent's leaders hoped that by bringing together South America's biggest economies, Brazil and Argentina, they could someday unite the entire Southern Cone. Much like France and Germany in the European Union, Brazil and Argentina have led their bloc since its inception, albeit unequally. (Because the Brazilian economy is notably larger than Argentina's, Brasilia has far greater clout within Mercosur than Buenos Aires.) By comparison, the economies of Mercosur's three remaining members — Venezuela, Uruguay and Paraguay — are too small or too specialized to claim much influence over the bloc's decision-making.

Given Brazil and Argentina's advanced economic development relative to their fellow Mercosur members, the distribution of power within the bloc is unlikely to change any time soon. The same cannot be said for Mercosur's policies. With demand from the bloc's largest buyers stagnating or declining, Mercosur members are pushing to open the traditionally protectionist trade union to new markets. But doing so would also risk inciting protests as local industries unaccustomed to external competition struggle to adapt, a pill few South American governments are eager to swallow. Even so, Mercosur will continue to mull the idea of liberalizing its policies in the coming decade, leaving the bloc's fate to fluctuations in commodity prices and regional trade in the meantime.

Analysis
Mercosur owes much of its design to South America's geography and the economic opportunities that arose from it. The sheer size of Brazil, for example, guaranteed it a prominent spot among the continent's economies, while terrain favorable to agriculture enabled Argentina to become an important part of international trade routes. Uruguay, located at the mouth of the Rio de la Plata, similarly used its trade advantages to industrialize rapidly. Yet to the north, landlocked Paraguay developed more slowly, hampered as it was by its landscape and inaccessibility. 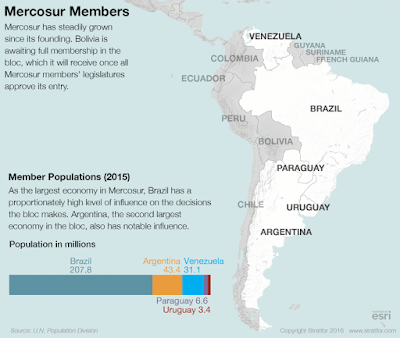 Brazil’s Geographic Challenge
Isolated from the rest of the continent both geographically and linguistically and lacking internal cohesion, Brazil has traditionally been inward looking. Watch the video … 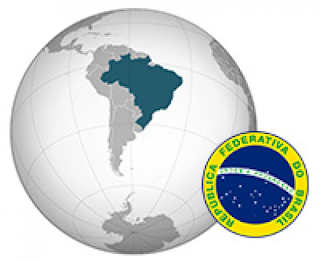 Geopolitics created the conditions for an economic partnership between Brazil and Argentina, but domestic politics dictated the institutional framework that shaped its formation. Starting in the mid-20th century, the two giants adopted a policy of import substitution industrialization (ISI), raising trade barriers to foreign goods entering the country in order to expand their own industrial bases and reduce their reliance on costly imports of inputs and finished products. In practice, Brasilia and Buenos Aires gave their domestic industries a chance to compete for a slice of the Brazilian and Argentine markets, and in some ways it worked. Several higher-value industries, such as the automotive sector, sprang up in both countries and were shielded from the most damaging effects of foreign competition.

Free Trade Gains Traction
But after a few decades, the ISI strategy had run its course. Though it had created domestic industries as Brazil and Argentina had intended, both nations still relied heavily on revenue generated by agricultural and mineral exports, which made them vulnerable to spikes and dips in commodity prices. Fiscal instability from the 1950s to the 1980s also made it more difficult for the Brazilian and Argentine governments to fund their ISI policies. Deep deficit spending led to occasional bouts of high inflation, and by the late 1980s, the two countries had begun to move away from the ISI approach altogether. In the wake of a sharp decline in the global commodities market and a series of Latin American debt crises, they began to search for a lifeline to bail out their sinking economies. The solution they settled on was freer trade, and they started to lower the barriers between their economies in the hope of striking an eventual trade agreement. 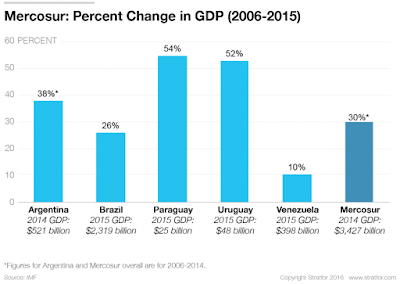 At the same time, the rest of the world's perception of trade was changing. Many protectionist countries, having encountered problems similar to Brazil's and Argentina's, began to weigh the virtues of free trade, and in 1991, Uruguay and Paraguay joined their larger neighbors to form the Mercosur customs union. Under the terms of membership, all four states agreed to lower tariffs and implement a common tax of up to 35 percent on certain imports. They also prohibited Mercosur states from signing preferential trade deals with other countries or blocs without first obtaining the unanimous approval of their fellow members. (Some notable exceptions were made for pre-existing trade agreements, including those between Mercosur members and Mexico.)

Pressure Builds
As an economic union, Mercosur has succeeded at more closely integrating South American economies, which historically have been focused overseas. In many ways this is unsurprising, considering the size and complexity of the two markets that anchor the bloc, and its members continue to coordinate their trade policies to some degree. Moreover, citizens of a full Mercosur member state can live and work freely throughout the bloc, so long as they do not have a criminal record. Political integration, however, has lagged. Though Mercosur was conceived as an organization that would someday develop political unity akin to that of the European Union, it has primarily functioned as a simple trade bloc.

But institutional changes are on the horizon. In the coming years, Mercosur will likely come to depend more on commodity exports, even in spite of the tighter industrial integration that trade among its members has encouraged. Brazil and Argentina have experienced considerable economic growth over the past two decades, much of which has been driven by China's rising demand for agricultural and mineral products — not for industrial outputs. Manufacturing's share of both economies has consequently fallen from 20 percent to 12 percent in Argentina and from 17 percent to 9 percent in Brazil since 1990. The erosion of these manufacturing sectors has made the effects of diminishing growth in Chinese demand for commodities all the more acute in recent years. This, combined with dwindling consumption, scandals and persistent economic troubles inside the bloc, has slashed Mercosur's overall growth. 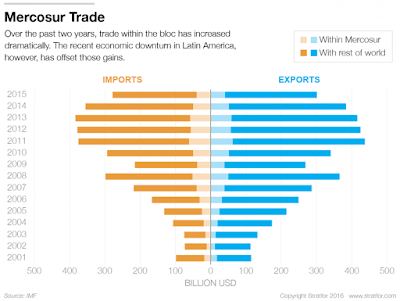 This, in part, explains the need to diversify the bloc's trade options. Brazil currently accounts for the most trade and wealth within Mercosur. It absorbs one-fifth of Argentina's exports and contributes 42 percent of the bloc's gross domestic product. Free trade among it and other Mercosur members has proved beneficial to all parties involved, but it has also made them more vulnerable to downturns in one another's economies. Now that the "bust" portion of the commodities trade cycle has hit, Mercosur's members need to reach trade deals with other partners to revive their economies. But because those deals would first need to survive the lengthy process of gaining unanimous approval from other Mercosur states, they may not come soon enough.

Members will likely try to loosen the organization's restrictive regulations in the coming years. In fact, some nations have already begun to take steps to look for buyers abroad that could help bolster their manufacturing exports. Brazil and Argentina, for instance, are expanding their existing trade agreements with other Latin American states such as Mexico, while several of the countries' high-ranking officials have called for the bloc to relax trade restrictions on individual members.

Nevertheless, independently forging new free trade agreements with other states or blocs is not possible for Mercosur countries, at least currently. Members will continue to float the idea of liberalizing the bloc's trade agreement process, but making substantive progress on the issue would require the buy-in of every member and would likely take several years of negotiations. Actually implementing such changes, should they be passed, would create additional problems. Opening sectors that are currently protected by Mercosur's policies would undoubtedly harm some political constituencies, cutting into member governments' support bases and inciting protests across the bloc.

As Mercosur's de facto leaders, Brazil and Argentina will be at the forefront of any change that does take place in the bloc's trade deal policies, though the chances of one occurring in the immediate future are slim. Until then, the bloc's fortunes will continue to be determined by commodity prices and internal trade rather than by newfound access to the lucrative markets outside its borders.
--
Diego Solis
Latin America Regional Director
STRATFOR - Global Intelligence
P.O. Box 92529
Austin, Texas 78709-2529
Phone: 512.925.8631
www.stratfor.com
Posted by Paulo Roberto de Almeida at 20:12