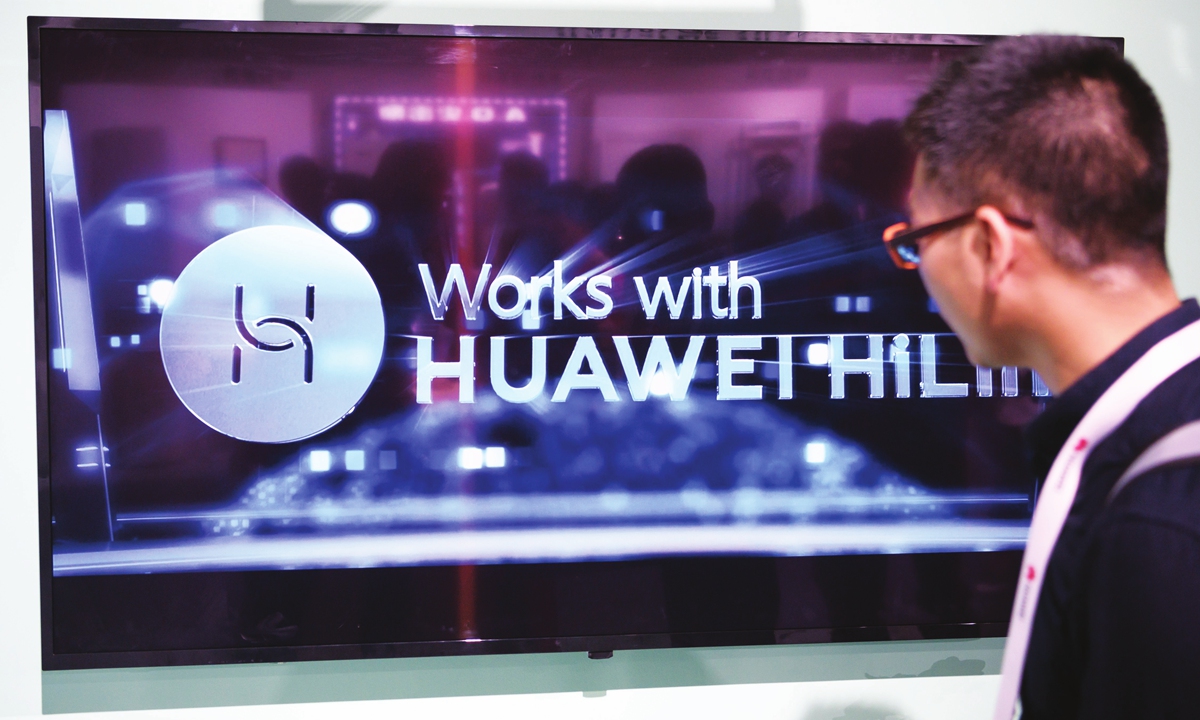 A visitor checks out a Huawei device at the Huawei Campus in Dongguan, Guangdong Province on August 10, 2019. Photo: VCG

The telecommunications sector will see a back-to-square-one moment, in which business considerations regain their rightful position from political considerations, Chinese analysts said on Sunday, after reports that the Brazilian government became the first in the world to backtrack on its opposition to Huawei's 5G bid.The Brazil will not seek to bar the Chinese telecommunication giant from its 2021 5G network auctions in June, Reuters reported, citing local newspaper Estado de S. Paulo.Financial costs potentially worth billions of dollars and the exit of US President Donald Trump are forcing President Jair Bolsonaro, who had opposed Huawei on unproven grounds, to backtrack on his opposition to Huawei's bid, the paper said.Chinese analysts said the reported move is significant as it makes Brazil the first country to change its stance on Huawei after Trump's election loss.Fu Liang, a Beijing-based telecom industry expert, told the Global Times on Sunday that as Trump leaves the White House and the US failed in its promise to provide badly needed vaccines to Brazil, which has been hit hard by the virus, Brazil's committed pro-US stance naturally did not materialize.Brazil has the second-highest COVID-19 death toll after the US, and the government is being criticized for a slow vaccination process.  Brazil's reported move to allow Huawei to bid is a setback for the Trump administration's so-called "Clean Network" scheme, for which it painstakingly lobbied around the world, coercing and luring countries to shun Chinese high-tech companies. The Brazilian development indicates the Trump administration's campaign to smear and exclude Chinese telecommunications giant Huawei is likely to fail globally, analysts said."Without the stick-and-carrot approach of the Trump administration, more countries will fall back to a neutral stance after they ventured to move against Huawei," Fu said. Fu predicted that more countries, including the UK and Canada, will take a similar approach as Brazil. As for the so-called "Clean Network" scheme, it will likely be changed under Joe Biden, according to Fu.Under pressure from the US, countries including the UK moved to ban Huawei. But their plans left room for a future change.Yi Beichen, a veteran mobile internet observer, told the Global Times on Sunday that while it remains to be seen whether Brazil will be followed by other countries, the development showed that in 2021, more telecom carriers will make their decisions based on business, not politics. Despite the ruthless crackdown by the US, Huawei still held its No.1 position as a global telecommunication gear provider with a 30-percent market share for the first nine months of 2020, per data from market intelligence firm Dell'Oro.This was due to Huawei's worldwide advantages in cost, technology, and security in 5G technologies, analysts said."Brazil's reported move complies with business logic. Will that backtrack score a win for the country's consumers and cause more countries to follow suit? That depends on Huawei's service," Yi said.However, as the world is still new to the 5G technology, and the fast-changing global situation, Huawei still faces challenges to defend its position, Yi said.Fu agreed, saying that there have been calls in the Western world to have more telecom hardware providers than the few current giants such as Ericsson, Nokia and Samsung.The world is getting polarized and countries are doing their best to protect their own interests, Fu said.
Posted by Paulo Roberto de Almeida at 12:04