"It is our true policy to steer clear of a permanent alliance with any portion of the foreign world," first U.S. President George Washington said in his farewell presidential address in September 1796.

However, the facts show differently. Take mechanisms such as the AUKUS, the Quadrilateral Security Dialogue (the Quad), the Five Eyes alliance and the Group of Seven (G7).

In mid-September, the United States, Britain, and Australia announced a trilateral security partnership dubbed AUKUS to "deepen diplomatic, security and defense cooperation" in the Indo-Pacific region.

The action angered France immediately. In 2016, Australia signed an AUD$90-billion ($65.4 billion) deal with the French majority state-owned Naval Group to purchase 12 conventional diesel-electric submarines in Canberra's biggest defense agreement. That has been canceled as a result of the nuclear-powered submarines plan.

Meanwhile, the newly established trilateral security partnership has sparked fierce criticism and widespread concerns over the impact it will have on regional security in the Asia-Pacific and global non-proliferation.

Under the United Nations Treaty on the Non-Proliferation of Nuclear Weapons, Australia is prohibited from manufacturing or acquiring nuclear weapons. However, Australia signed a formal agreement with the U.S. and the UK  last month to allow the sharing of highly classified nuclear technology – the first time that nuclear-powered technology between the U.S. and the UK is being shared with another country.

"The so-called security relationship is a very negative mechanism for regional countries, as well as for U.S. partners and allies," Teng Jianqun, director of the Arms Control and International Security Research Center of the China Institute of International Studies, told CGTN.

He also said the mechanism challenges the non-proliferation policy recognized by the international community and acquiring a nuclear-powered submarine will enable Australia to be more ambitious in regional affairs. "The Australian government will possibly send the submarines to some sensitive areas such as the South China Sea," Teng said.

Quad hypes up the 'China threat'

The Quad, an informal security grouping of the U.S., Japan, Australia and India, is another example that fits into the notion of multilateralism while it is actually an exclusive club.

The dialogue was initiated in 2007 by Japan, and after a long-time hiatus, the Quad reconvened in 2017 when the U.S. proposed the so-called Indo-Pacific strategy on East Asia cooperation. 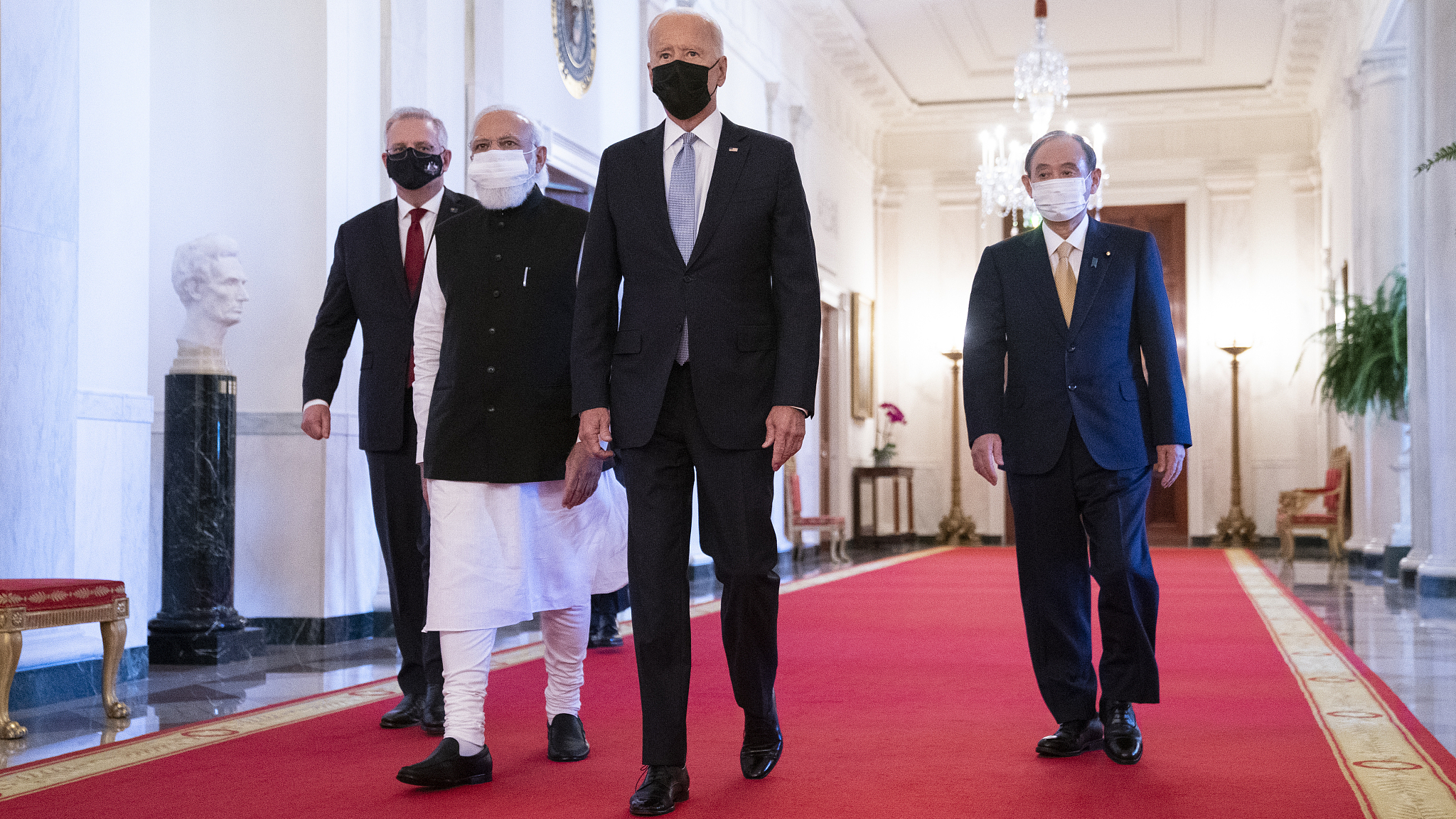 In March, the leaders of the Quad held their first summit that ended with a statement in which China was not mentioned, but it contained a number of phrases specifically directed at China. For example, the Quad countries said they "will strive for an Indo-Pacific region unconstrained by coercion."

In September, during the first face-to-face summit of the Quad nations, the countries focused on topics including vaccines, climate, cooperation on technology and space without mentioning the words "China" or "Beijing" but China was "the subtext of most of the group's agenda," the Washington Post reported.

Beijing has denounced the attempts by the Quad to hype up the "China threat" saying the four-member bloc was going against the global trends of peace and cooperation and was bound to fail.

Five Eyes alliance seeks only its own interests

Going back further, the Five Eyes alliance, an intelligence alliance comprising Australia, Canada, New Zealand, the United Kingdom and the United States, grew out of the aftermath of World War II and continued through the Cold War.

The alliance countries have long been engaged in large-scale cyber theft, surveillance and attacks, and obliged technology companies to insert "backdoors" in encrypted applications. 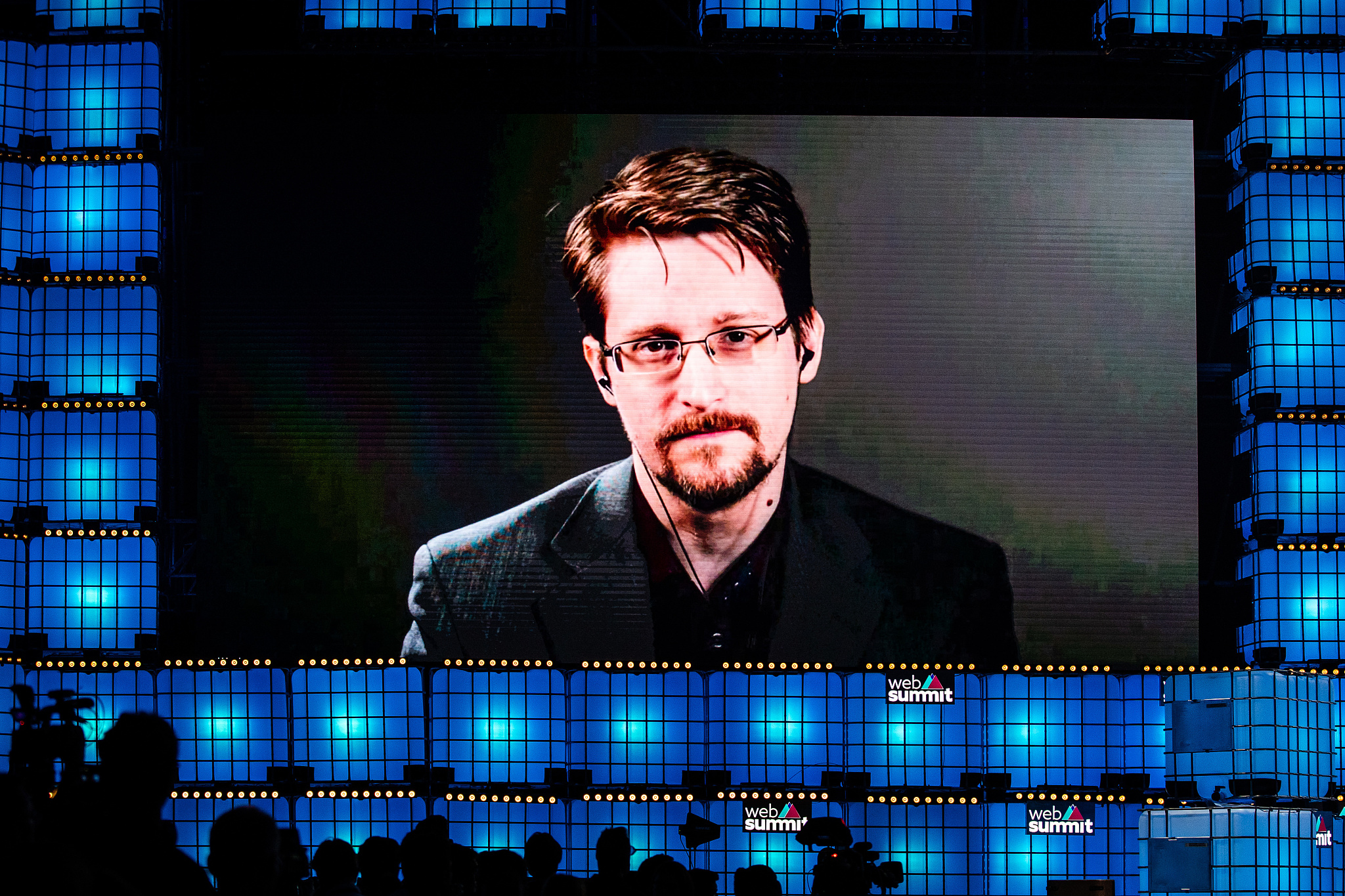 Edward Snowden, a former intelligence officer who served in the CIA and NSA for nearly a decade as a subject matter expert on technology and cybersecurity, speaks from Russia for an interview during the annual Web Summit technology conference in Lisbon, November 4, 2019. /CFP

In October the same year, the German government said Chancellor Angela Merkel's phone may have been bugged by U.S. intelligence. WikiLeaks disclosed in 2015 that the NSA had spied on French presidents Jacques Chirac, Nicolas Sarkozy and Francois Hollande.

In May 2021, media outlets exposed another scandal of the U.S. monitoring its European allies, reporting that the NSA spied on text messages and phone conversations of leaders from Germany, France, Norway, Sweden, etc. from 2012 to 2014 by tapping into Danish information cables.

Meanwhile, there is little mutual trust within the U.S. alliance system, and bedfellows have different dreams. The G7, an inter-governmental political forum consisting of Canada, France, Germany, Italy, Japan, the United Kingdom and the United States, is typical.

In August 2019, the G7 summit was held in France. Trump said before the summit that the U.S. will tax French wines if France levies a digital tax on U.S. internet technology companies such as Google, Facebook and Apple. For his part, Donald Tusk, then president of the European Council, said the EU will "respond in kind" if Washington imposes tariffs on France.

Reuters listed a series of controversial issues before the summit: Trump's dissatisfaction with France's passage of the bill to levy the digital services tax in July; the U.S. dismissal of other members' efforts to address climate change; the U.S. and European differences on whether to readmit Russia back to the G7; European powers' efforts to ease the tensions between the U.S. and Iran. 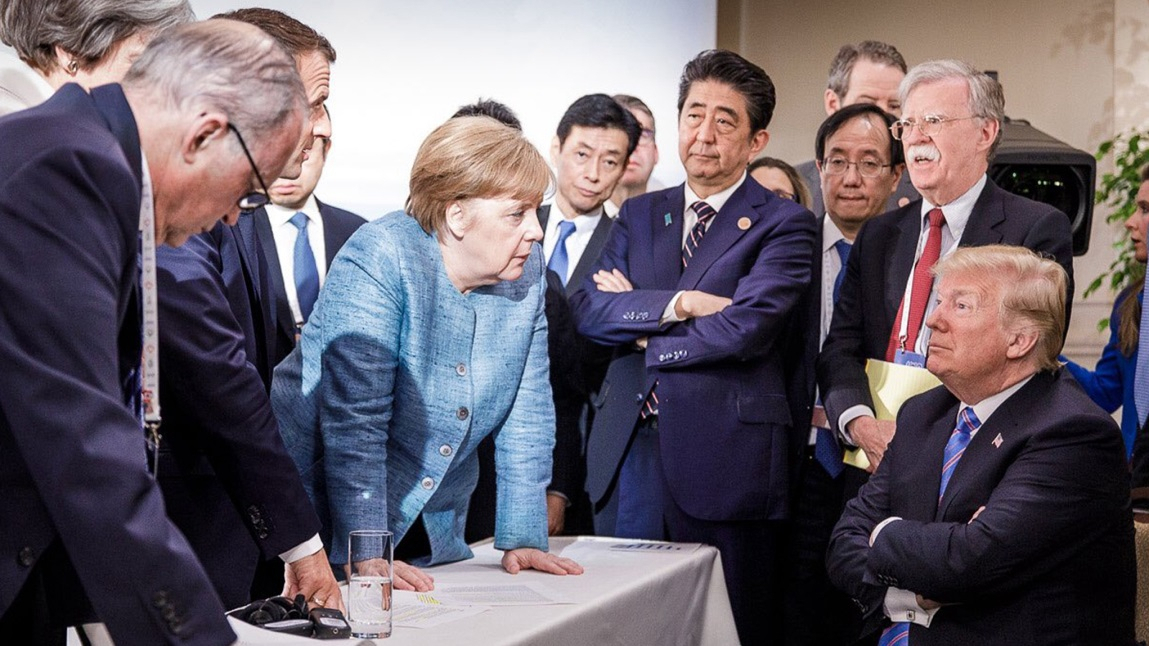 Former U.S. President Donald Trump (R) is surrounded by other G7 leaders during a meeting of the G7 Summit in La Malbaie, Quebec, Canada, June 9, 2018. /VCG

"This is our time. A moment for transformation. An era to re-ignite multilateralism. An age of possibilities," said United Nations Secretary-General Antonio Guterres in his keynote address to the 76th session of the United Nations General Assembly.

Facing two major challenges – climate change and the COVID-19 pandemic, the world needs to uphold multilateralism more than ever. But what kind of multilateralism should the international community adhere to?

China has reiterated its position on "true multilateralism," saying that all countries should refrain from pursuing unilateralism and hegemonism and should not use multilateralism as a pretext to form small circles or stir up ideological confrontation.

The real definition of multilateralism is respecting the UN Charter, promoting the democratization of international relations, and not playing with group politics or selective multilateralism, Chinese State Councilor and Foreign Minister Wang Yi has emphasized.

The professor wrote in an article "We don't need the G7" that criticized the group's goals on issues such as the global distribution of vaccines and climate change as meager.

"Over the years, multilateralism seems to have become a political cliche and even a political ploy which deviated from its original purpose. There emerged various forms of 'pseudo-multilateralism'," said Yuan Sha, assistant research fellow at the Department of American Studies, in an article on the CGTN website.