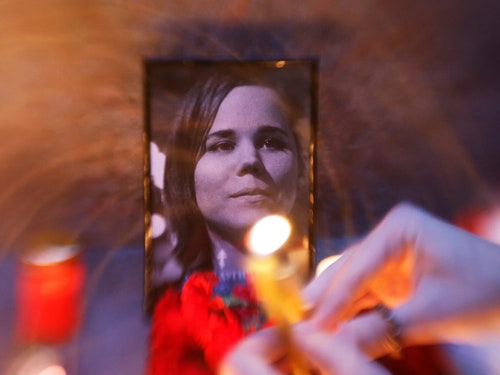 The Mysterious Murder of Darya Dugina

Whoever killed Dugina likely meant to kill her more famous father, but that reveals little about the motives and identities of the perpetrators.

Darya Dugina, a twenty-nine-year-old Russian television commentator, was laid to rest at an undisclosed location in Moscow on August 23rd. Three days earlier, Dugina had attended a festival called Tradition, a daylong event that, this year, included a lecture by her father, the self-styled political philosopher Aleksandr Dugin, on the metaphysical dualism of historical thinking. The gathering concluded with a concert called “The Russian Cosmos.” Afterward, Darya Dugina drove away in a Toyota Land Cruiser. The car exploded, killing her. Aleksandr Dugin was apparently travelling in a different vehicle, and it seems likely that whoever killed Darya had meant to kill her better-known father. There has since been much speculation about the identity and motives of the killers, but little is known for certain. Still, some theories are better than others.

Western media accounts have portrayed Dugin as a sort of Putin whisperer, the brains behind the Kremlin’s ideology. He is not that, but his story tells a lot about recent Russian history and the current state of Russian society. Dugin came out of the Moscow cultural underground. The son of minor members of the Soviet nomenklatura, he was expelled from college and educated himself by reading banned and restricted literature. When I was researching Dugin’s story for my book “The Future Is History,” an ex-partner of his and the mother of his older child, Evgeniya Debryanskaya, remembered that Dugin, then in his early twenties, procured a copy of Martin Heidegger’s “Being and Time” on microfilm. He did not, of course, have a microfilm reader at home, so he rigged up a device designed for showing simple children’s reels and projected the book onto his desk. The arrangement was not ideal: it showed a barely visible mirror image of the text. Dugin read Heidegger backward, in the dark, and, according to Debryanskaya, lost some of his eyesight in the process. The symbolic potential of this story is staggering. Its literal meaning is informative: Dugin’s ability to self-educate was limited by censorship, isolation, and ignorance.

Dugin taught himself languages in order to read the thinkers who interested him most. By the late nineteen-eighties, these were apparently mostly far-right, traditionalist, and fascist philosophers. The first book that Dugin translated was by Julius Evola, an Italian philosopher currently popular with a faction of the right wing in the United States. Steve Bannon has deployed Evola’s ideas. To the extent that the Russian political world can be compared to that of the U.S., Bannon can serve as a useful reference: not only are his views related to Dugin’s—and not only are both Dugin and Bannon connected to European neo-Fascist networks—but Bannon’s and Dugin’s relationships to actual political power are complicated in similar ways. There were certainly moments, early in the Trump Presidency, when Bannon’s ideas seemed to exert great influence on U.S. political life. But, in the end, Bannon’s vision of the world—and himself in it—served Donald Trump for a limited time only.

Totalitarian leaders use ideology instrumentally. Contrary to popular perception, totalitarian ideologies are not coherent or consistent; rather, they are opportunistic concoctions of ideas and words that are useful in times of crisis and mobilization. Dugin spent the nineties and much of the early two-thousands getting only incrementally closer to the Russian political establishment—he co-founded a fringe nationalist party, then launched an obscure imperialist movement. But he also got his academic credentials and, for a time, held a chair at Moscow State University. His star seemed to rise in 2014, when Vladimir Putin invaded Ukraine for the first time. Dugin had developed an entire arsenal of language for this occasion. He had called for the creation of a “Russian World,” a geographically non-specific concept that imagined Russia on a civilizational mission rooted in traditional values and the Russian Orthodox religion. Annexing eastern Ukraine would have been the first step to building the Russian World. In 2014, the Kremlin, in its pivot from the politics of Soviet nostalgia to the politics of imperial resurgence, started speaking Dugin’s language.

Dugin’s right-hand person, Natalya Makeeva, told me at the time, “Our power is negligible, but our influence is infinite.” (Dugin knew that I was writing about him but refused to speak to me directly—likely because I am queer—so he sent a spokesperson to meet with me on his behalf.) Makeeva’s phrase seemed true at the time: Dugin was still nowhere near the Kremlin or the actual levers of power, but his words were everywhere. Still, influence cannot actually be infinite. In Dugin’s view, Putin didn’t go far enough in Ukraine eight years ago. Dugin railed against what he perceived as the Russian President’s weakness. In this role, Dugin was arguably just as useful to Putin as when he served as a sort of shadow ideologue. All political regimes need their critics to mark the margins, so that the leader can position himself at the imaginary center. Dugin’s imperialist ambitions made Putin look moderate.

Dugin’s daughter, Darya, followed a path similar to her father’s. She studied philosophy, spending a year in France. She wrote her master’s thesis on Plato. She also played in a band, performing in Moscow’s hipster clubs. The name of the band was Dasein May Refuse. (“Dasein” is a Heideggerian term that means a determinate being.) In her twenties, Darya started working more closely with her father, representing both him and his views, and she eventually left the music scene to devote herself fully to political propaganda. She signed her articles “Darya Platonova.”

On February 24th, when Russia launched its full-scale invasion of Ukraine, Dugina was elated. She wrote on her Telegram channel, “Last night I was walking down a deserted Moscow street and saw a Russian flag flying in the distance. Something whispered, ‘The Russians are coming.’ A woman’s intuition is mighty. There is a reason I noticed that quiet and that flag. In my mind I heard the slogan, ‘Empire, be!’ When I woke up, the empire had come into being.”

Most likely, whoever killed her believed her father to be more important—more influential and closer to the Kremlin—than he actually is. Russia immediately accused the Ukrainian government of the murder. But one of Ukrainian President Volodymyr Zelensky’s advisers, Oleksiy Arestovych, who started out as an anti-Western activist, formerly ran in the same circles as Dugin; he even appeared with him at an event seventeen years ago. Arestovych knows that Dugin is no Putin whisperer. Another adviser to Zelensky, Mykhailo Podolyak, denied that official Ukraine had anything to do with the murder. “We are not a criminal state like Russia,” he said. “And we are certainly not a terrorist state.”

A variety of outlets have floated the conspiracy theory that the Russian secret police staged the murder in order to mobilize the Russian population in support of the war. But Dugin is hardly a household name in Russia; the masterminds of the crime would have to be misinformed to believe that his murder, or his daughter’s, would spark widespread outrage. Plus, people who are actual household names in Russia tend to travel with security, which Dugin apparently did not. On the other hand, secret-police agents charged with tracking non-Kremlin-controlled political movements may be susceptible to the hype of those movements. It is possible that certain members of the state security service, the F.S.B., think Dugin is more prominent than he is.

Ilya Ponomarev, a former Russian opposition politician who has been living in Ukraine for the past seven years, claimed that an organization called the National Republican Army carried out the murder. The National Republican Army was effectively unknown before Ponomarev mentioned it on social media. This may mean one of two things: either the National Republican Army is a new group using terrorist tactics, and it killed Dugina to show what it’s capable of; or this is, in effect, a marketing move, a rush to take credit. In either case—whether the National Republican Army is real or fictional—this version is probably inching closer to the truth. Dugina likely died at the hands of non-state actors, probably a newly created group or a newly radicalized person. There is nothing surprising about such a group or individual appearing nearly six months into the war, after tens of thousands of war crimes committed by Russian troops have been documented. To whoever killed Darya Dugina, targeting a propagandist may seem like a pointedly mild response to the deaths of hundreds of children and the erasure of entire cities like Mariupol.

Two days after the car bomb went off, the F.S.B. announced that it had solved the case. The secret police pointed to a Ukrainian military officer, Nataliya Vovk, as the murderer. According to the prosecution’s story, Vovk entered Russia by car—a gray Mini Cooper—with her twelve-year-old daughter, and rented an apartment in the same building as Dugina. She was able to trace her victim’s every move. Once the remotely operated car bomb went off, Vovk, according to the F.S.B., changed the license plates on her car and left the country via the land crossing to Estonia. The F.S.B. has claimed that Vovk is a colonel in the Azov Regiment of the Ukrainian Army. The Azov Regiment has disavowed the existence of such an officer, but that’s not the only issue with this story: anyone who has crossed Russian land borders knows that getting in and out in a car is usually a long, involved process. It’s nearly impossible to imagine that a Ukrainian citizen slipped in or out with fake license plates. Also, the F.S.B. has never been known to solve a political murder in a couple of days—or, really, at all.

In the meantime, Putin sent official condolences to Dugina’s parents and awarded Dugina a medal for valor. The official parliamentary newspaper broadcast her funeral live. At one point during the service, Leonid Slutsky, who leads the (misnamed) Liberal Democratic Party of Russia, called out, “One country, one President, one victory”—an almost exact translation of the German Nazi Party’s slogan Ein Volk, ein Reich, ein Führer. The historian Timothy Snyder has coined the term “schizofascism” to describe this sort of rhetoric: people acting like fascists while calling their enemies fascists, as the Russian propaganda machine continues to do with Ukraine. When Aleksandr Dugin spoke at the funeral, he said that his daughter had “fallen at the front, and the front is here. She lived for our victory and died for it—for our Russian victory, our truth.”

The murder of Darya Dugina will almost certainly foment further pro-war mobilization in Russia. Margarita Simonyan, who runs the RT network and often functions as the social-media mouthpiece of the Kremlin, has called for Russia to retaliate by striking the “decision-making centers” in Ukraine—a thinly veiled call for murdering Zelensky. (The Ukrainian President, for his part, warned of a possible escalation of Russian aggression, and government employees were asked to work remotely; on Thursday, Putin ordered the army to recruit a hundred and thirty-seven thousand new troops.) This does not mean that the murder was planned inside Russia, by people who wanted to use it to aid the war effort. We know now that the twentieth-century events that heralded unprecedented terror—the Reichstag fire in Berlin, in 1933, and the murder of Sergei Kirov, in Leningrad, in 1934—were, in fact, carried out by rogue actors. Still, they set in motion the totalitarian machine. Darya Dugina’s murder may serve the same—probably unintended—function, making her father’s influence infinite indeed. ♦

More on Russia’s Invasion of Ukraine