The Great Divergence: China, Europe, and the Making of the Modern World Economy - Kenneth Pomeranz 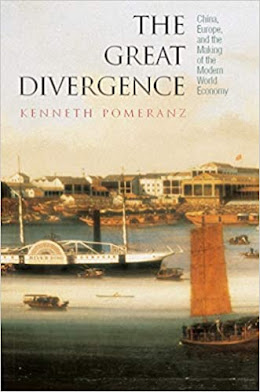 The Great Divergence: China, Europe, and the Making of the Modern World Economy

(The Princeton Economic History of the Western World) Kindle Edition

The Great Divergence brings new insight to one of the classic questions of history: Why did sustained industrial growth begin in Northwest Europe, despite surprising similarities between advanced areas of Europe and East Asia? As Ken Pomeranz shows, as recently as 1750, parallels between these two parts of the world were very high in life expectancy, consumption, product and factor markets, and the strategies of households. Perhaps most surprisingly, Pomeranz demonstrates that the Chinese and Japanese cores were no worse off ecologically than Western Europe. Core areas throughout the eighteenth-century Old World faced comparable local shortages of land-intensive products, shortages that were only partly resolved by trade.Pomeranz argues that Europe's nineteenth-century divergence from the Old World owes much to the fortunate location of coal, which substituted for timber. This made Europe's failure to use its land intensively much less of a problem, while allowing growth in energy-intensive industries. Another crucial difference that he notes has to do with trade. Fortuitous global conjunctures made the Americas a greater source of needed primary products for Europe than any Asian periphery. This allowed Northwest Europe to grow dramatically in population, specialize further in manufactures, and remove labor from the land, using increased imports rather than maximizing yields. Together, coal and the New World allowed Europe to grow along resource-intensive, labor-saving paths.Meanwhile, Asia hit a cul-de-sac. Although the East Asian hinterlands boomed after 1750, both in population and in manufacturing, this growth prevented these peripheral regions from exporting vital resources to the cloth-producing Yangzi Delta. As a result, growth in the core of East Asia's economy essentially stopped, and what growth did exist was forced along labor-intensive, resource-saving paths--paths Europe could have been forced down, too, had it not been for favorable resource stocks from underground and overseas.