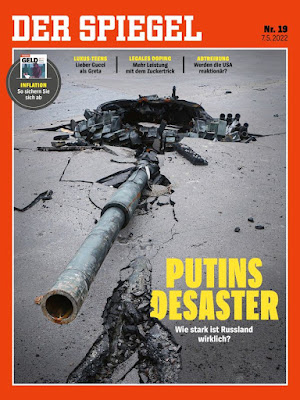 Vladimir Potemkin
Putin's Disaster and What Could Happen Next
­Der Spiegel, May 6, 2022
By Christian Esch, Susanne Koelbl und Fritz Schaap
06.05.2022, 18.42 Uhr
The world has overestimated Putin's power. His army is much weaker than thought, his intelligence services have failed and sanctions are starting have an impact. Will all this weaken the Russian president or make him more dangerous?
May 9, 2022 – what a victory celebration it should have been! Just imagine: Vladimir Putin, Gatherer of the Russian Lands, greets the victorious returning troops on Red Square. Ukraine shattered as a country, its capital Kyiv taken in a surprise attack, its government exiled. Along with the battlefield triumph, Russia also celebrates its ruler, who boldly changed the course of history, triggering the biggest celebration since the 1945 parade held to celebrate the victory of Stalin's army over Nazism.
Given the events of the past few months, that was likely what Putin had been hoping for. But the reality has turned out rather differently. On May 9, Russia will again celebrate Victory Day with a military parade, as it does every year, but the army that will parade through Red Square this time will be a humiliated one. Two and a half months after the invasion of Ukraine, Russia's armed forces are no longer the feared power they once were.
Russia's military pride has turned out to be something of a sham, like the village backdrops that Prince Grigory Potemkin once allegedly set up for his czarina to fool her into thinking he was settling empty territories.
Putin's troops have experienced a military and moral fiasco in Ukraine. Poorly led, poorly supplied, poorly motivated and poorly equipped, they have failed against an enemy thought to be much weaker. They had to retreat from their positions near the capital city of Kyiv. And what had been planned as a blitzkrieg has turned into a tough slog, a war of attrition.
It is all just as surprising as it is devastating to the system Putin has built. The Kremlin leader has spent years preparing his country for a major confrontation with the West – in military, economic and political terms. His declared goals are maximum sovereignty and autonomy, for Russia to be an independent pole of power in the world. Now, it has turned out that the highly equipped army is unable to overrun its poorer neighbor. Russia's economy – dependent on imports. Most of its vast foreign reserves – blocked by Western sanctions. Its intelligence services – unable or unwilling to properly inform the ruler.
Is Putin's system of power itself a Potemkin village, without the world, including Vladimir Putin himself, having noticed? What does it mean when this system's weaknesses are suddenly exposed? And does that make it more dangerous?
A pet project of Russian Defense Minister Sergei Shoigu is located an hour's drive west of Moscow: the army amusement park called "Patriot." At the park, you can ride in toy tanks, shoot with real AK-47s, watch re-enacted World War II battles and buy army souvenirs. Since 2020, it has also featured a church co-designed by Shoigu in olive green – the "Main Cathedral of the Russian Armed Forces." House-sized mosaics depict Russia's armed victories through the centuries – all the way up to the 2014 annexation of Crimea and Russia's intervention in Syria. A mosaic featuring Putin and Shoigu and the country's political elite had also initially been planned. In the lower church, a spacious baptismal font allows for the baptism of troops, and weapons looted from the Nazi Wehrmacht have been melted into the steps.
The church's inauguration is symbolic of the new prestige the army has acquired during Putin's rule – in part attributable to the ambition of Defense Minister Shoigu. He brought glamour to the military, a new level of self-confidence and societal status. He gave the army not only its church, but also dashing new uniforms, a youth organization (Yunarmiya) and political officers for the kind of ideological indoctrination conducted in Soviet times. He kept the troops busy with large-scale, snap exercises. Russia's air force operation in Syria could even be seen as a patriotic film in theaters.

With the invasion of Ukraine, though, that facade has collapsed and bizarre shortcomings have come to light. Just this week, a secretly recorded conversation emerged in which contract soldiers from the Caucasus detailed all that had gone wrong for them. The men returned home on their own in late March to South Ossetia, a de facto Russian-controlled area on Georgian territory. In a conversation with the region's president, they complained of armored personnel carriers that wouldn't start, tanks that refused to fire, officers who hide from their soldiers out of fear, artillery that missed targets by two kilometers and wounded soldiers who weren't provided with treatment. They also lamented a lack of information, maps and radios and of grenade launchers they said were bent. South Ossetia's president rebuked the men and asked if they thought Russia would lose the war. "Yes, we do," came the reply.

Moscow prefers to keep silent about the number of Russians who have actually been killed in Ukraine. The latest official figures are about a month and a half old. In April, the British government said it estimated 15,000 soldiers had been killed, whereas the General Staff of the Ukrainian Armed Forces cites nearly 25,000 fallen. One military analyst in Brussels estimates that the Russians have lost close to 1,000 tanks. At least seven Russian generals have been killed. The flagship of the Russian Black Sea Fleet, the guided missile cruiser Moskva sank, apparently after being fired upon by anti-ship missiles.

The first days of the invasion, in particular, when the Russian army advanced on the Ukrainian capital, baffled Western analysts. "The strategic mistakes are completely crazy," John Spencer, an expert on urban warfare at the Madison Policy Forum think tank, told DER SPIEGEL at the time. Many observers now agree that the strength of the Russian military has been overestimated.

One of the most visible weaknesses is logistics. Overstretched, poorly secured supply routes turned into easy targets for small, mobile Ukrainian units, especially in the early weeks of the war. Just a few days after the war began, a U.S. official said that 70 percent of Russian forces would soon run out of fuel and food, or had already.

Glaring failures have also emerged in equipment maintenance – a result of sloppiness or corruption: Expensive air defense systems are getting stuck because their tires are defective, some missile launchers still have tires with "Made in the USSR" labels on them. "Their logistics have been disastrous throughout," says military historian Phillips O'Brien. "They just assumed they would steamroll the Ukrainians and they wouldn't have to worry about supply." Since Russia began concentrating its attacks on the Donbas region in eastern Ukraine, these massive logistics problems have been less frequent, in part due to the fact that supply routes are shorter and the advance has faltered.