Henry Kissinger ‘We are now living in a totally new era’

Henry Kissinger Cold war strategist discusses Russia, the Ukraine war and China at the FTWeekend Festival in Washington Henry Kissinger says there is insufficient discussion about the risk of nuclear weapons 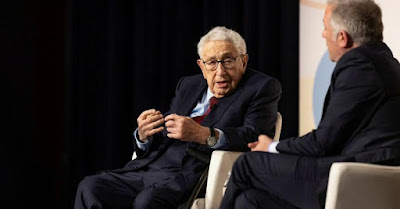 This is the edited transcript of a discussion between Henry Kissinger, former US secretary of state and national security adviser, and Edward Luce, Financial Times US national editor, which took place on May 7 in Washington.

Financial Times: Earlier this year, we commemorated the 50th anniversary of the Nixon visit to China, the Shanghai communique. You, of course, were the organiser, the orchestrator of this Sino-US agreement. And it was a major shift in the cold war: you split China from Russia. It feels like we’ve gone 180 degrees. And now Russia and China are back in a very tight relationship. My opening question to you is: are we in a new cold war with China?

Henry Kissinger: At the time we opened to China, Russia was the principal enemy — but our relations with China were about as bad as they could be. Our view in opening to China was that it was unwise, when you have two enemies, to treat them exactly alike. What produced the opening were tensions that developed autonomously between Russia and China. [Former Soviet Union head of state Leonid] Brezhnev could not conceive that China and the United States could get together. But Mao, despite all his ideological hostility, was ready to begin conversations. In principle, the [Sino-Russian] alliance is against vested interests, it’s now established. But it does not look to me as if it is an intrinsically permanent relationship.

FT: I take it that it would be in America’s geopolitical interest to encourage more distance between Russia and China. Is this wrong?

HK: The geopolitical situation globally will undergo significant changes after the Ukraine war is over. And it is not natural for China and Russia to have identical interests on all foreseeable problems. I don’t think we can generate possible disagreements but I think circumstances will. After the Ukraine war, Russia will have to reassess its relationship to Europe at a minimum and its general attitude towards Nato. I think it is unwise to take an adversarial position to two adversaries in a way that drives them together, and once we take aboard this principle in our relationships with Europe and in our internal discussions, I think history will provide opportunities in which we can apply the differential approach. That doesn’t mean that either of them will become intimate friends of the west, it only means that on specific issues as they arise we leave open the option of having a different approach. In the period ahead of us, we should not lump Russia and China together as an integral element.

FT: The Biden administration is framing its grand geopolitical challenge as being democracy versus autocracy. I’m picking up an implicit hint that it's the wrong framing?

HK: We have to be conscious of the differences of ideology and of interpretation that exists. We should use this consciousness to apply it in our own analysis of the importance of issues as they arise, rather than make it the principal issue of confrontation, unless we are prepared to make regime change the principal goal of our policy. I think given the evolution of technology, and the enormous destructiveness of weapons that now exist, [seeking regime change] may be imposed on us by the hostility of others, but we should avoid generating it with our own attitudes.

FT: You have probably more experience than any person alive of how to manage a stand-off between two nuclear-armed superpowers. But today’s nuclear language, which is coming thick and fast from [Russian president Vladimir] Putin, from people around him, where do you put that in terms of the threat we are facing today?

HK: We are now [faced with] with technologies where the rapidity of exchange, the subtlety of the inventions, can produce levels of catastrophe that were not even imaginable. And the strange aspect of the present situation is that the weapons are multiplying on both sides and their sophistication is increasing every year. But there’s almost no discussion internationally about what would happen if the weapons actually became used. My appeal in general, on whatever side you are, is to understand that we are now living in a totally new era, and we have gotten away with neglecting that aspect. But as technology spreads around the world, as it does inherently, diplomacy and war will need a different content and that will be a challenge.

FT: You’ve met Putin 20 to 25 times. The Russian military nuclear doctrine is they will respond with nuclear weapons if they feel that the regime is under existential threat. Where do you think Putin’s red line is in this situation?

HK: I have met Putin as a student of international affairs about once a year for a period of maybe 15 years for purely academic strategic discussions. I thought his basic convictions were a kind of mystic faith in Russian history . . . and that he felt offended, in that sense, not by anything we did particularly at first, but by this huge gap that opened up with Europe and the east. He was offended and threatened because Russia was threatened by the absorption of this whole area into Nato. This does not excuse and I would not have predicted an attack of the magnitude of taking over a recognised country. I think he miscalculated the situation he faced internationally and he obviously miscalculated Russia’s capabilities to sustain such a major enterprise — and when the time for settlement comes all need to take that into consideration, that we are not going back to the previous relationship but to a position for Russia that will be different because of this — and not because we demand it but because they produced it.

FT: Do you think Putin’s getting good information and if he isn’t what further miscalculations should we be preparing for?

HK: In all these crises, one has to try to understand what the inner red line is for the opposite number . . . The obvious question is how long will this escalation continue and how much scope is there for further escalation? Or has he reached the limit of his capability, and he has to decide at what point escalating the war will strain his society to a point that will limit its fitness to conduct international policy as a great power in the future. I have no judgment when he comes to that point. When that point is reached will he escalate by moving into a category of weapons that in 70 years of their existence have never been used? If that line is crossed, that will be an extraordinarily significant event. Because we have not gone through globally what the next dividing lines would be. One thing we could not do in my opinion is just accept it.

FT: You’ve met [Chinese president] Xi Jinping many times and his predecessors — you know China well. What lessons is China drawing from this?

HK: I would suspect that any Chinese leader now would be reflecting on how to avoid getting into the situation in which Putin got himself into, and how to be in a position where in any crisis that might arise, they would not have a major part of the world turned against them.

Transcribed by James Politi in Washington