Washington, Aug. 28 -- More than 200,000 Americans, most of them black but many of them white, demonstrated here today for a full and speedy program of civil rights and equal job opportunities.

It was the greatest assembly for a redress of grievances that this capital has ever seen.

One hundred years and 240 days after Abraham Lincoln enjoined the emancipated slaves to "abstain from all violence" and "labor faithfully for reasonable wages," this vast throng proclaimed in march and song and through the speeches of their leaders that they were still waiting for the freedom and the jobs.

There was no violence to mar the demonstration. In fact, at times there was an air of hootenanny about it as groups of schoolchildren clapped hands and swung into the familiar freedom songs.

But if the crowd was good-natured, the underlying tone was one of dead seriousness. The emphasis was on "freedom" and "now." At the same time the leaders emphasized, paradoxically but realistically, that the struggle was just beginning.

On Capitol Hill, opinion was divided about the impact of the demonstration in stimulating Congressional action on civil rights legislation. But at the White House, President Kennedy declared that the cause of 20,000,000 Negroes had been advanced by the march.

The march leaders went from the shadows of the Lincoln Memorial to the White House to meet with the President for 75 minutes. Afterward, Mr. Kennedy issued a 400-word statement praising the marchers for the "deep fervor and the quiet dignity" that had characterized the demonstration.

Says Nation Can Be Proud

The nation, the President said, "can properly be proud of the demonstration that has occurred here today."

The main target of the demonstration was Congress, where committees are now considering the Administration's civil rights bill.

At the Lincoln Memorial this afternoon, some speakers, knowing little of the way of Congress, assumed that the passage of a strengthened civil rights bill had been assured by the moving events of the day.

But from statements by Congressional leaders, after they had met with the march committee this morning, this did not seem certain at all. These statements came before the demonstration.

Senator Mike Mansfield, of Montang, the Senate Democratic leader, said he could not say whether the mass protest would speed the legislation, which faces a filibuster by Southerners.

Senator Everett McKinley Dirksen of Illinois, the Republican leader, said he thought the demonstration would be neither an advantage nor a disadvantage to the prospects for the civil rights bill.

The human tide that swept over the Mall between the shrines of Washington and Lincoln fell back faster than it came on As soon as the ceremony broke up this afternoon, the exodus began. With astounding speed, the last buses and trains cleared the city by midevening.

At 9 P.M. the city was as calm as the waters of the Reflecting Pool between the two memorials.

At the Lincoln Memorial early in the afternoon, in the midst of a songfest before the addresses, Josephine Baker, the singer, who had flown from her home in Paris, said to the thousands stretching down both sides of the Reflecting Pool:

"You are on the eve of a complete victory. You can't go wrong. The world is behind you."

Miss Baker said, as if she saw a dream coming true before her eyes, that "this is the happiest day of my life."

But of all the 10 leaders of the march on Washington who followed her, only the Rev. Dr. Martin Luther King Jr., president of the Southern Christian Leadership Conference, saw that dream so hopefully.

The other leaders, except for the three clergymen among the 10, concentrated on the struggle ahead and spoke in tough, even harsh, language.

But paradoxically it was King--who had suffered perhaps most of all--who ignited the crowd with words that might have been written by the sad, brooding man enshrined within.

As he arose, a great roar welled up from the crowd. When he started to speak, a hush fell. 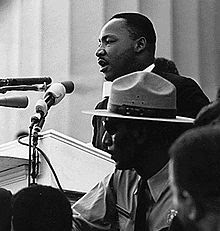 "Even though we face the difficulties of today and tomorrow, I still have a dream," he said.

"It is a dream that one day this nation will rise up and live out the true meaning of its creed: 'We hold these truths to be self-evident, that all men are created equal.'"

"I have a dream..." The vast throng listening intently to him roared.

"...that my four little children will one day live in a nation where they will not be judged by the color of their skin but by the content of their character.

As Dr. King concluded with a quotation from a Negro hymn- "Free at last, free at last, thank God almighty"- the crowd, recognizing that he was finishing, roared once again and waved their signs and pennants.

But the civil rights leaders, who knew the strength of the forces arrayed against them from past battles, knew also that a hard struggle lay ahead. The tone of their speeches was frequently militant.

Roy Wilkins, executive secretary of the National Association for the Advancement of Colored People, made a plan that he and his colleagues thought the President's civil rights still did not go nearly far enough. He said:

"The President's proposals represent so moderate an approach that if any one is weakened or eliminated, the remainder will be little more than sugar water. Indeed, the package needs strengthening."

Harshest of all the speakers was John Lewis, chairman of the Student Nonviolent Coordinating Committee.

"My friends," he said, "Let us not forget that we are involved in a serious social revolution. But by and large American politics is dominated by politicians who build their career on immoral compromising and ally themselves with open forums of political, economic and social exploitation."

"They're talking about slowdown and stop. We will not stop.

In the original text of the speech, distributed last night, Mr. Lewis said:

"We will not wait for the President, the Justice Department, nor the Congress, but we will take matters into our own hands and create a source of power, outside of any national structure, that could and would assure us a victory."

He also said in the original text that "we will march through the South, through the heart of Dixis, the way Sherman did."

It was understood that at least the last of these statements was changed as a result of a protest by the Most Rev. Patrick J. O'Boyle, Roman Catholic Archbishop of Washington, who refused to give the invocation if the offending words were spoken by Mr. Lewis.

The great day really began the night before. As a half moon rose over the lagoon by the Jefferson Memorial and the tall lighted shaft of the Washington Monument gleamed in the reflecting pool, a file of Negroes from out of town began climbing the steps of the Lincoln Memorial.

There, while the carpenters nailed the last planks on the television platforms for the next day the TV technicians called through the loudspeakers, "Final audio, one, two, three, four," a middle-aged Negro couple, the man's arm around the shoulders of his plump wife, stood and read with their lips:

"If we shall suppose that American slavery is one of the offenses which in the providence of God must needs come, but which having continued through His appointed time, He now wills to remove..."

The day dawned clear and cool. At 7 A.M. the town had a Sunday appearance, except for the shuttle buses drawn up in front of Union Station, waiting.

By 10 A. M. there were 40,000 on the slopes around the Washington Monument. An hour later the police estimated the crowd at 90,000. And still they poured in.

Because some things went wrong at the monument, everything was right. Most of the stage and screen celebrities from New York and Hollywood who were scheduled to begin entertaining the crowd at 10 did not arrive at the airport until 11:15.

As a result the whole affair at the monument grounds began to take on the spontaneity of a church picnic. Even before the entertainment was to begin, groups of high school students were singing with wonderful improvisations and hand-clapping all over the monument slope.

Civil rights demonstrators who had been released from jail in Danville, Va., were singing:

"Move on, move on. Till all the world is free."

And members of Local 144 of the Hotel and Allied Service Employes Union from New York City, an integrated local since 1950, were stomping:

Then the pros took over, starting with the folk singers. The crowd joined in with them.

Joan Baez started things rolling with "the song" - "We Shall Overcome."

"Oh deep in my heart I do believe We shall overcome some day."

And Peter, Paul, and Mary sang "How many times must a man look up before he can see the sky."

And Odetta's great, full-throated voice carried almost to Capitol Hill: "If they ask you who you are, tell them you're a child of God."

Jackie Robinson told the crowd that "we cannot be turned back," and Norman Thomas, the venerable Socialist, said: "I'm glad I lived long enough to see this day."

The march to the Lincoln Memorial was supposed to start at 11:30, behind the leaders. But at 11:20 it set off spontaneously down Constitution Avenue behind the Kenilworth Knights, a local drum and bugle corps dazzling in yellow silk blazers, green trousers and green berets.

Apparently forgotten was the intention to make the march to the Lincoln Memorial a solemn tribute to Medgar W. Evers, N.A.A.C.P. official murdered in Jackson, Miss., last June 12, and others who had died for the cause of civil rights.

The leaders were lost, and they never did get to the head of the parade.

All spoke at the memorial except Mr. Farmer, who is in jail in Louisiana following his arrest as a result of a civil rights demonstration. His speech was read by Floyd B. McKissick, CORE national chairman.

At the close of the ceremonies at the Lincoln Memorial, Bayard Rustin, the organizer of the march, asked Mr. Randolph, who conceived it , to lead the vast throng in a pledge.

Repeating after Mr. Randolph, the marchers pledged "complete personal commitment to the struggle for jobs and freedom for Americans" and "to carry the message of the march to my friends and neighbors back home and arouse them to an equal commitment and an equal effort."

RELATED HEADLINES
President Meets March Leaders: Says Bipartisan Support Is Needed for Rights Bill
'I Have a Dream...': Peroration by Dr. King Sums Up a Day the Capital Will Remember
Congress Cordial but Not Swayed: Leaders of March Pay Calls of Courtesy at Capitol
Capital Is Occupied by a Gentle Army
Posted by Paulo Roberto de Almeida at 14:34