THE BALFOUR DECLARATION
The Origins of the Arab-Israeli Conflict
By Jonathan Schneer
Illustrated. 432 pp. Random House. $30 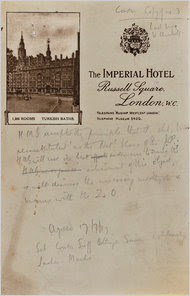 Sotheby’s, via Associated Press
The only known surviving handwritten draft of the Balfour declaration.

On November 2, 1917, the British government expressed its sympathy with Jewish Zionist aspirations and announced that it would use its “best endeavors” to facilitate “the establishment in Palestine of a national home for the Jewish people.” The announcement came in a letter from Foreign Secretary Arthur James Balfour to Lord Rothschild, the unofficial leader of the British Jewish community. The Balfour declaration became the diplomatic foundation stone of the state of Israel; it is considered the original sin by Israel’s opponents.

In this comprehensive study, richly documented by diplomatic correspondence, Jonathan Schneer concludes that the famous declaration seems to have just missed the sidetrack of history: in contrast to a common myth, Britain’s support for Zionism was not the result of an inevitable process. In fact, as Schneer reveals, shortly after Balfour’s promise to the Jews, the British government offered the Ottoman Empire the opportunity to keep Palestine and to continue to fly the Turkish flag over it.

Schneer, a professor at Georgia Tech’s School of History, Technology and Society, is a talented writer. Describing the British Empire’s haughtiness, he takes his readers inside the Foreign Office in Whitehall, walks them along the marble floors and among the columns, pointing out the “grand red-carpeted staircase outlined by polished gleaming banisters, arched windows, glowing chandeliers and elaborately patterned ceilings and walls.” Schneer says about the men who worked there that “when it came to measuring themselves against visitors, no matter how distinguished and no matter where from, they suffered few insecurities.”

Chaim Weizmann, the leading spokesman for Zionism in Britain, must have felt ill at ease when he entered those awesome corridors of power. A Russian-born chemist, he began to solicit support among the British soon after he settled in Manchester in 1904. He could hardly speak English in those days: his first contacts with British officials were conducted in French. But if he was taken aback by the snobbery and coolness that awaited him at Whitehall, he made sure to conceal his uneasiness, acting as if he commanded an almost omnipotent power: world Jewry. The British believed he did.

Obviously there was no “Jewish power” controlling world affairs, but Weizmann successfully pretended that the Jews were in fact turning the wheels of history. For once, the anti-Semitic image of the Jews proved useful — they were believed to be so maliciously dangerous that one would do best to acquire them as allies rather than as enemies.

Beginning in 1916, the British hoped that in exchange for their support of Zionism “the Jews” would help to finance the growing expenses of the Great War, which at that time was not going very well for Britain. More important, policy makers in the Foreign Office believed that Jews could persuade the United States to join the war. In this sense, as Schneer points out, the decision to issue the Balfour declaration “was based upon a misconception.”

But fear of the Jews was only one part of the story. The other part, which Schneer neglects to explore, was the genuine admiration many of Britain’s leaders, including Prime Minister David Lloyd George and Balfour himself, felt for the Jews and their history. These men were deeply religious Christian Zionists. They had grown up on the Bible; the Holy Land was their spiritual home. Modern Zionism, they believed, would fulfill a divine promise and resettle the Jews in the land of their ancient fathers.

As part of this context, Schneer expertly analyzes the passionate and fascinating controversy between non-Zionist and Zionist Jews that preceded the Balfour declaration. The Zionists spoke in the name of Jewish nationhood; their Jewish opponents denied that Jews even constituted a separate nation.

The Balfour declaration used deliberately vague language. The term “national home” was chosen in order to minimize the Zionist dream, that is, to make Palestine an actual Jewish state. The Arabs, whose “civil and religious” (not national and political) rights were not to be prejudiced, as the declaration put it, were referred to only as “existing non-Jewish communities.”

According to Schneer, the Arabs were as invisible to the early Zionists as Africans had been to Boers in South Africa, or Indians to the French and English colonists in North America. But in fact, some of the first Zionists were well aware of the Arabs’ vehement objection to their national aspirations. As early as 1899, Theodore Herzl himself, the father of political Zionism, corresponded with the Arab mayor of Jerusalem, Yusuf Dia al-Khalidi, who urged him to find a national home for the Jews somewhere else in the world. The Israeli-Palestinian conflict seems to have had its origins at the very beginning of Zionism.

Many of the British diplomatic papers Schneer examines were brilliantly written. At times it seems that these dispatches and reports, rather than analyses of foreign policy, were the exercises of frustrated poets and writers, educated at Eton and Oxford, who hoped for posterity in the Public Record Office. Much of what they wrote led nowhere, though Schneer elaborates on their maneuvers at great length.

He details, for instance, the correspondence between British officials and the Arabs, as well as a secret diplomatic scheme of 1916 known as the “Sykes-­Picot Agreement,” which would have partitioned much of the Ottoman Empire, including Palestine, between Britain and France. These initiatives have little significance today, except perhaps with regard to the Arab contention that the British had promised Palestine to the Arabs before they promised it to the Jews. Schneer suggests that the promises given to the Arabs were too vague and contradictory to evaluate. Still, the way he reveals the characters behind the diplomatic papers, bringing them to life, makes his book particularly enjoyable.

Take Britain’s magnificent, if abortive, effort to detach the Ottoman Empire from the Central Powers. The idea was to orchestrate what would today be called regime change in Turkey. The new rulers would then make a separate peace with Britain, retain Palestine and get a handsome bribe for themselves — millions of American dollars. The central figure in this drama was a man named Basil Zaharoff, later Sir Basil, an Ottoman-born arms dealer and self-made diplomat whose corruption, pomposity and eccentricity British policy makers could not resist.

The Balfour declaration thus finds its place among a multitude of fruitless schemes and indulgent fantasies, except, of course, that in this case, surprisingly, the British by and large kept their word. For at least two decades they allowed the Zionist movement to bring hundreds of thousands of Jewish immigrants into Palestine, and these new arrivals set up hundreds of settlements including several towns, as well as the political, economic, military and cultural infrastructure of the future state of Israel. But if Israel’s existence originated with the British, so did the Palestinians’ tragedy. The Balfour declaration was only the opening chapter of a still unfinished story.

Tom Segev’s new book, “Simon Wiesen­thal: The Life and Legends,” will be published next month.
Posted by Paulo Roberto de Almeida at 22:30