Come and see my villa

The regime has taken to locking up businessmen 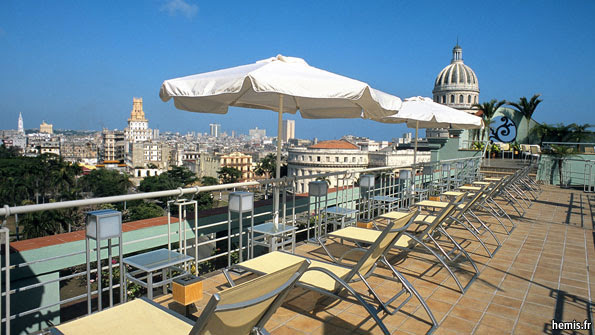 Swapping the Saratoga’s comforts for a cell in Villa Marista
LAST year Coral Capital, one of the biggest private investors in Cuba, released a glossy brochure for a property development. “Live in Havana,” said the blurb. “You know you want to.” It was anticipating a new law that, for the first time since the revolution, would allow foreigners to buy property, in this case around a couple of golf courses which the company was intending to develop. Now Coral Capital’s top two bosses, both British citizens, are under arrest, caught up in an investigation that has in equal measure bemused and alarmed foreigners doing business in Cuba.
Since last summer dozens of senior Cuban managers, in industries from nickel to cigars, have been arrested, along with some established foreign businessmen. They include two Canadian executives who managed trading companies. Another target was Max Marambio, a Chilean former guerrilla and friend of Fidel Castro, who made a fortune after setting up a fruit-juice company that was one of Cuba’s first joint enterprises. He was convicted in absentia.
In this section
Reprints
Related topics
Coral Capital says it has invested around $75m in Cuba, notably in doing up the Saratoga, Havana’s most luxurious hotel. Its chief operating officer, Stephen Purvis, was arrested as he was about to take his children to school. Though assured that he will not face serious charges, he has reason to be worried. His boss, Amado Fahkre, was picked up last October and is still being held (he has not been formally accused of any crime). Both men have been questioned at Villa Marista, the notorious counter-intelligence headquarters of the Ministry of Interior. Cuban intelligence officials boast that, eventually, everyone “sings” after a stay at the villa.
These arrests have not been mentioned in the state media. But they appear to form part of an inquiry into illegal payments to Cuban citizens. Officially, almost all Cubans, including the managers of businesses which turn over many millions of dollars, are paid a state salary of around $20 a month. Under-the-table payments are commonplace. “We are somewhat in the dark here,” says a European businessman based in Havana. “If I pay my manager an extra $100 a month, as I feel I should. Is that a crime against national security?” It seems so.
Postado por Paulo Roberto de Almeida às 17:27