The 100 best nonfiction books: No 95 – Areopagitica by John Milton (1644)
Today Milton is remembered as a great poet. But this fiery attack on censorship and call for a free press reveals a brilliant English radical 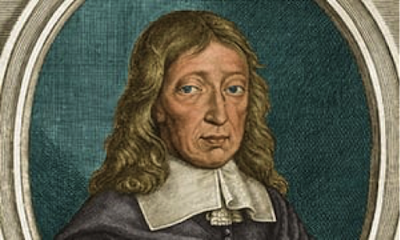 John Milton: ‘A fiery pamphleteer in an age of religious and political argument.’ Photograph: Alamy Stock

Throughout England and Europe, the 17th century was notable for its violence, instability and profound social upheavals. On the continent, a whole generation became traumatised by the thirty years’ war. In England, the civil war divided the country and executed a king. There are some moments when, as is happening again now, the forces of history seem to be on the march. In England, several writers (notably Browne, Burton, Hobbes and Marvell) who lived through these dangerous times produced work that is clearly influenced by the experience of chaos, conflict and revolution.


John Milton is perhaps most notable of these. Born the son of a scrivener in Cheapside, London, in 1608, and educated at Cambridge, he devoted many years in mid-life to the politics of the Commonwealth, was arrested during the Restoration, but was released, had blindness in old age, and died in 1674.


Milton today is remembered as the author of Lycidas, Paradise Lost, and Paradise Regained – a supremely great English poet. To his contemporaries, however, he was pre-eminently a rhetorical writer – a fiery pamphleteer in an age of religious and political argument, whose tireless defence of divorce, progressive education, regicide and the Commonwealth marked him out as a natural, and brilliant, English radical.


For Milton himself, his gifts were complementary. He said he could write with his left hand (prose) or his right hand (poetry). To understand him better, and to locate him in the England of the civil war and subsequent Restoration, his readers need to reconcile these two parts of his genius, the polemical master as much as the subtle lyricist. Milton’s Areopagitica is the mature text that displays both parts of his creative imagination at full pitch, and adds another dimension to our appreciation of his poetry – in the words of one critic “a monument to the ideal of free speech”. As Milton himself writes: “A good book is the precious life-blood of a master spirit, embalmed and treasured up on purpose to a life beyond life.”


Subtitled “A speech of Mr John Milton for the liberty of the unlicensed printing, to the Parliament of England”, the title of Areopagitica pays deliberate homage to the Areopagiticus of the famous Greek orator Isocrates. Like all his contemporaries, notably Sir Thomas Browne (No 93 in this series), Milton believed that referencing the classics was one way of guaranteeing the permanence of his prose.


The exercise of freedom for Milton was a moral and dynamic right: free citizens must always strive to earn their freedom


Milton was writing in response to parliament’s licensing order of 14 June 1643, a repressive measure that had shockingly re-established the press restrictions of the hated Stuart dynasty. His attack on censorship and call for a free press asserted the ideals of liberty and free speech in a tour de force of English prose that’s at once fierce and poetic: “As good almost kill a man as kill a good book: who kills a man kills a reasonable creature, God’s image; but he who destroys a good book, kills reason itself, kills the image of God, as it were in the eye.”


For Milton, as for all great libertarians, true freedom is indivisible, a point that he argues with polemical brilliance.


Areopagitica opens with a survey of press licensing, satirically linking the practice to the Spanish Inquisition. Why, he asks, should the common reader not be free to judge for themselves between a good and bad book? Is it not the condition of virtue to recognise evil and resist it? In a celebrated passage, he writes that he has no time for “a fugitive and cloistered virtue”. The exercise of freedom for Milton was a moral and dynamic right: free citizens must always strive to earn their freedom. For Milton, it was this “struggle” that bestowed value on the individual’s place in society, a theme that links the ethical position of all his writing, poetry as much as prose. Any regulation of reading, he continues, broadening the argument against the licensing of the press, should logically include all recreations.


“If we think to regulate printing, thereby to rectify manners, we must regulate all recreations and pastimes, all that is delightful to man… And who shall silence all the airs and madrigals, that whisper softness in chambers?”


This passage is an apt reminder that the cultural changes wrought by the Puritan revolution did not eliminate a lingering attachment to a courtly style that would survive (just) into the 18th century. Milton’s work is expressive of a society in transition.

For Milton, as for any progressive intelligence, the concept of truth was always complicated and various, a concept that must be assembled through argument and analysis – the free exercise of thought and opinion. He cites the example of Galileo, whom he had met in his villa outside Florence, “grown old, a prisoner to the Inquisition”, as an example of free thought wrongfully restricted. (Both Milton and Hobbes – No 94 in this series – had benefited from the experience of meeting Galileo.)


Areopagitica builds over some 40 pages (in my Penguin edition) to a rousing appeal to “the Lords and Commons” to consider “what Nation it is we are”. Milton’s answer is both patriotic and inspiring: “A nation not slow and dull, but of a quick, ingenious and piercing spirit… methinks I see in my mind a noble and puissant nation rousing herself after sleep, and shaking her invincible locks.”


His optimism, however, is freighted with anxiety at the prospect of a breakdown between rival political and religious interests. He concludes that there can be no limits to tolerance. Freedom must be unlimited, and without restriction – inalienable and indivisible: “Give me the liberty to know, to utter, and to argue freely, according to conscience, above all liberties.”


“I cannot praise a fugitive and cloistered virtue, unexercised and unbreathed, that never sallies out and sees her adversary, but slinks out of the race, where that immortal garland is to be run for, not without dust and heat.”