For King And Country

Henrik Bering
The Wall Street Journal, October 21, 2011
April 25, 1617, a Parisian mob was busy mutilating a corpse on Pont Neuf, roasting the victim's heart over charcoal. The unfortunate individual was Concino Concini, the widely despised principal adviser to the queen mother, Marie de' Medici. The day before, her 16-year-old son, Louis XIII, had ended Marie's regency and ordered Concini's arrest. Showing signs of resistance, Concini was shot on the spot. His friends buried him after dark, but the mob unearthed the body and began parading him through the streets of Paris, snacking on bits of him along the way.
One of the carriages held up at the bridge that day contained the bishop of Lucon, Armand-Jean du Plessis—the title "de Richelieu" was not yet his—who was a minister in the regency and a subordinate of Concini's. One wrong move in that ugly swarm and Concini's fate could be his. Always resourceful, du Plessis ordered his men to shout "Vive le roi! Vive le roi!" and the carriage was let through.
The incident opens Jean-Vincent Blanchard's vivid "Eminence: Cardinal Richelieu and the Rise of France." Traditionally, the man who was named a cardinal in 1622 and soon after became Louis XIII's chief minister has been portrayed in French schools as being "to statesmanship what Machiavelli was to political theory, Galileo to science and Descartes to philosophy." His master plan was to unite a fragmented country under an omnipotent king and to make France the leading power in Europe by challenging the Habsburgs of Spain and Austria. Success at home was a prerequisite for success elsewhere.
To Richelieu's enemies, he was known as "the Red Tyrant," but readers conditioned by Alexander Dumas's "The Three Musketeers" to see Richelieu as an arch villain will be prompted to a rethinking by "Eminence." Consider the poisonous lot that Richelieu had to deal with. Marie de' Medici became apoplectic at the very mention of his name after he thwarted her desire to become the power behind the throne. Louis XIII's brother Gaston d'Orleans wanted to be king himself and sought help abroad. And the queen, like the others, cultivated foreign contacts, constantly plotting to remove him.
Enlarge Image 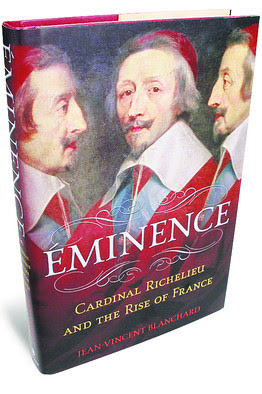 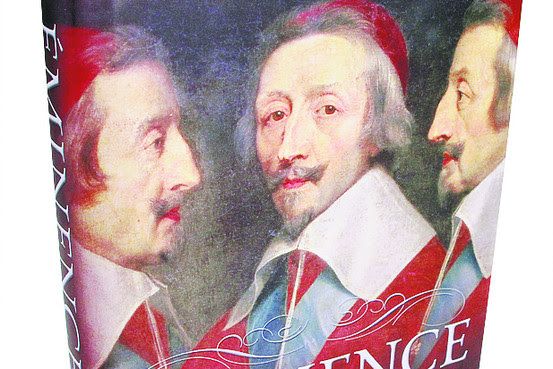 By Jean-Vincent Blanchard
(Walker, 309 pages, $30)
Louis XIII himself was a moody introvert, clever enough to realize that he needed Richelieu but also resentful. Mr. Blanchard quotes a historian from that period on the tricky position the cardinal occupied: "The six square feet of the King's private study gave him more worries than all of Europe."
Richelieu's right-hand man was a barefooted Capuchin friar called Father Joseph, described by Aldous Huxley in the biography "Grey Eminence" as an odd combination of Savonarola and Metternich in his role as chief diplomat; and as chief of intelligence, Joseph had no limits when it came to destroying his master's enemies. As his boss put it: "In matters of state, doors must shut pity out."
For Richelieu to achieve his goal of consolidating the French state, he first needed to tame feudal noblemen, who had their own private armies, and militant Protestants. Mr. Blanchard expertly details the siege of La Rochelle, a Protestant stronghold that was starved into submission. We see Richelieu and his engineers planning the dam that was built across the outer harbor to prevent the city from receiving supplies, and we find him on his flagship watching a futile English relief attempt. Inside the city, residents dragged themselves to the cemetery before expiring.
Though certainly ruthless, Richelieu was no fanatic. He demanded that Protestants acknowledge the king's sovereignty, but he did not revoke the Edict of Nantes, which guaranteed their freedom of conscience. (It was later revoked by Louis XIV.) Abroad, Richelieu's pragmatism allowed him to enter into alliances with the Swedish King Gustav Adolphus and the German Protestant princes. He had a larger aim: encouraging them to bleed the Habsburgs until France could gain the upper hand.
Throughout, Richelieu foiled countless conspiracies against him. The final one was that of the king's favorite, the Marquis de Cinq-Mars, a vain and effeminate youth who had been installed by Richelieu himself for Louis's amusement. The marquis turned on Richelieu and plotted with the king's brother Gaston d'Orleans to kill him. But Richelieu's spy service discovered the plan and Cinq-Mars was arrested. The book describes in gruesome detail the botched executions in 1642 of Cinq-Mars and an accomplice by a substitute executioner: When Cinq-Mars's head failed to separate from the body, the executioner "grabbed it by the hair and sawed off." Dumas's expert Headsman of Lille would not have approved.
Possessing evidence that the king himself knew of Cinq-Mars's intentions, Richelieu demanded that Louis promise to embrace no more favorites and dismiss de Treville, the captain of the king's musketeers, a Cinq-Mars loyalist. But Richelieu's triumph mattered little: A few days after wringing the concessions from Louis, Richelieu fell ill with pleurisy and died within weeks. The king did not look overly stricken.
Mr. Blanchard chooses to see Richelieu's achievements as a 17th-century "work in progress." After all, his successor, Cardinal Mazarin, needed six more years to ratify the Treaties of Westphalia in 1648, ending the Thirty Years War, and France would soon go through another round of aristocratic revolt. But Richelieu provided the beginnings of a national administration, and in foreign policy he made the national interest trump everything else, including religion. The author quotes Henry Kissinger's estimation that Richelieu was "the father of the modern state system." And as the founder of l'Académie Française, Richelieu contributed greatly to French culture.
On Richelieu's death, Pope Urban III famously said: "If there is a God, Cardinal Richelieu will have much to answer for. If not, he has done very well." Mr. Blanchard, choosing the book's epigraph, preferred the playwright Corneille's verdict: "He has done me too much good to speak ill of him. He has done me too much bad to speak well of him."
Mr. Bering, a writer and critic, last wrote for the Journal about auction catalogs.
Postado por Paulo Roberto de Almeida às 08:48