The Invisible Hand? How Market Economies Have Emerged and Declined since AD 500, by Bas van Bavel - Book review by Jared Rubin 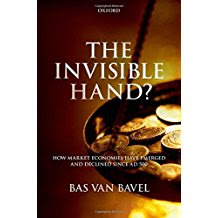 Brief by Amazon:
The Invisible Hand offers a radical departure from the conventional wisdom of economists and economic historians, by showing that 'factor markets' and the economies dominated by them - the market economies - are not modern, but have existed at various times in the past. They rise, stagnate, and decline; and consist of very different combinations of institutions embedded in very different societies. These market economies create flexibility and high mobility in the exchange of land, labour, and capital, and initially they generate economic growth, although they also build on existing social structures, as well as existing exchange and allocation systems. The dynamism that results from the rise of factor markets leads to the rise of new market elites who accumulate land and capital, and use wage labour extensively to make their wealth profitable. In the long term, this creates social polarization and a decline of average welfare. As these new elites gradually translate their economic wealth into political leverage, it also creates institutional sclerosis, and finally makes these markets stagnate or decline again. This process is analysed across the three major, pre-industrial examples of successful market economies in western Eurasia: Iraq in the early Middle Ages, Italy in the high Middle Ages, and the Low Countries in the late Middle Ages and the early modern period, and then parallels drawn to England and the United States in the modern period. These areas successively saw a rapid rise of factor markets and the associated dynamism, followed by stagnation, which enables an in-depth investigation of the causes and results of this process.

Jared Rubin is an associate professor of economics at Chapman University. His recent book Rulers, Religion, and Riches: Why the West Got Rich and the Middle East Did Not (2017, Cambridge University Press) analyzes the role that religious authorities and institutions played in the economic development — or lack thereof — of Western Europe and the Middle East.
Copyright (c) 2018 by EH.Net. All rights reserved. This work may be copied for non-profit educational uses if proper credit is given to the author and the list. For other permission, please contact the EH.Net Administrator (administrator@eh.net). Published by EH.Net (May 2018). All EH.Net reviews are archived at http://www.eh.net/BookReview.
Posted by Paulo Roberto de Almeida at 00:02