Flawed Capitalism On Both Sides Of The Atlantic 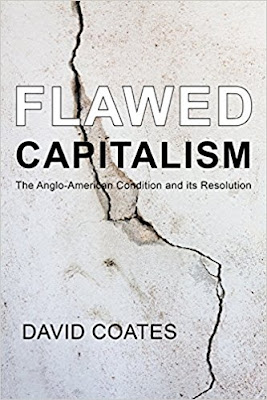 Given the scale of poverty and inequality in contemporary Britain (and indeed in the United States), no right-thinking person can presumably be fully happy with the organization of a system of rewards that leaves so many people under daily and severe financial pressure, keeping the millennial generation struggling to enjoy in their 20s even the modest life options enjoyed by their parents. And given too the steady failure of the US economy to maintain the value of blue-collar wages and of the UK economy to break out of a productivity trap that keeps general wages down and living standards stagnant, it is also presumably hard to avoid the conclusion that we are now in need on both sides of the Atlantic of an entirely new way of organizing both economy and society.
To make sense of where we find ourselves, and to locate a better way forward, my latest book Flawed Capitalism: the Anglo-American Condition and its Resolution, traces the similarities and differences between the two great examples of modern deregulated capitalism.
Both post-war US and UK economies are currently living downwind of two long periods of sustained growth, each associated with a distinctive social settlement.
That second settlement did not simply fall. It crashed in the financial crisis of 2008 and attempts to revive it by conservative politicians in both countries have simply given us a second lost decade that now matches the 1970s in severity and despair.
With that in mind, Flawed Capitalism also argues that the current rise of right-wing populism in the advanced industrial world must be seen a product (with the Trump and Brexit votes as examples) of what Antonio Gramsci long ago called “morbid symptoms” – symptoms of madness generated in the interregnum between social settlements. If that formulation is right, ending those morbid symptoms will first require the creation of a new social settlement which alone can bring the interregnum to a close; and, to succeed in that closure, any new social settlement will have to be more progressive than the one it replaces, since it was its predecessor’s reactionary character that was the ultimate cause of its collapse.
Recent attempts to revive the neoliberal social settlement – by Tory-led governments in the UK, and by ultra-conservative Republicans in the US Congress and now White House – have had (and are continuing to have) similarly appalling social consequences. These include: intensified pressure on the living standards of working families, and the associated rise in levels of personal indebtedness; persistent and deepening poverty for the low paid, the unemployed, and those reliant on welfare benefits; the continuing failure to ease and improve the work-life balance for families; intensified racism and hostility to immigration; and the emergence of at least two “lost” generations on each side of the Atlantic – a working class one trapped in areas of declining industrial employment, and a more middle-class millennial one facing (among other things) mountains of student debt, rising housing costs and the burden of heavy transport and childcare expenses.
In the light of these adverse consequences of conservative attempts to prolong the Thatcher/Reagan settlements, Flawed Capitalism argues that the way forward to a new social settlement is both clear and urgent.
Flawed Capitalism argues that the British Labour Party – in its Corbyn-led form – offers a route to that new settlement if its progressive policy trajectory can be maintained; and the Democrats will find themselves with a similar opportunity in Washington DC in 2020 if the Sanders wing of the party prevails. So, the future is all to play for. We live in interesting times; but with the times come both opportunity and responsibility. An opportunity now exists to call into existence a new and more progressive social settlement. It is an opportunity that this generation of progressives must not waste. They can only waste it by failing to recognize it, and by failing to act.

David Coates holds the Worrell Chair in Anglo-American Studies at Wake Forest University. He is the author of 'Answering Back: Liberal Responses to Conservative Arguments', New York: Continuum Books, 2010. You can visit his website at http://www.davidcoates.net. He writes here in a personal capacity.