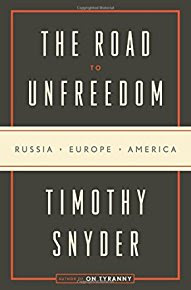 Historians of the first half of the 20th century take little pleasure in today’s renewed interest in their subject. We don’t like the parallels between the West then and now: the rise of intolerant nationalist right-wing parties; the loss of faith in democratic institutions and the longing for a strong leader; the demonization of minorities like Jews or Muslims; or the unwillingness or inability of democracies to work together.
We are living in dangerous times, Timothy Snyder argues forcefully and eloquently in his new book, “The Road to Unfreedom.” Too many of us, leaders and followers, are irresponsible, rejecting ideas that don’t fit our preconceptions, refusing discussion and rejecting compromise. Worse, we are prepared to deny the humanity and rights of others. In his chilling “Bloodlands: Europe Between Hitler and Stalin,” Snyder explored the ghastly consequences of tyranny and the breakdown of human values and norms in the center of Europe.
The road to unfreedom, as Snyder sees it, is one that runs right over the Enlightenment faith in reason and the reasonableness of others — the very underpinning, that is, of our institutions and values. Recent examples, found around the world, demonstrate both how important conventions and mutual respect are as a way of maintaining order and civility — and how easily and carelessly they can be smashed. Just think of President Trump’s regular impugning of the loyalty of those who work for the American government, in the F.B.I., for example.

Margaret MacMillan is the author, most recently, of “History’s People: Personalities and the Past.”
Follow New York Times Books on Facebook and Twitter, sign up for our newsletter or our literary calendar. And listen to us on the Book Review podcast.
A version of this article appears in print on May 13, 2018, on Page 11 of the Sunday Book Review with the headline: Gathering Storm.