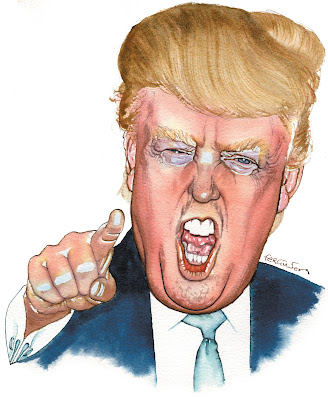 “President Trump should win the Nobel Peace Prize.”
— South Korean President
Moon Jae-in
“No-bel! No-bel! No-bel!”
— Audience at Trump’s Michigan rally Saturday
NOBEL PEACE PRIZE ACCEPTANCE SPEECH OF PRESIDENT TRUMP
OSLO, DEC. 10, 2018
Your Majesties, Your Royal Highnesses, distinguished members of the Norwegian Nobel Committee:
I have received a lot of honors — like, a lot. I was on the cover of Time more than anybody else. I went to the best schools. I was elected president on my first try. It was the biggest electoral college landslide since Reagan. But people tell me this is a big honor — the biggest, maybe. And I think this is very good for you, because your ratings are going through the roof right now. This crowd is much bigger than Obama’s was.
People don’t know this, but some other top guys like Nelson Mandela have won this award before. He’s done an amazing job and is being recognized more and more, even though South Africa is a crime-ridden mess that is just waiting to explode — not a good situation for the people! Anyway, with me, you’re breaking all the records. You’re welcome.
I love Norwegians! I want more immigrants from Norway and others who have the same merit-based complexion that Norwegians have. Why are we having all these people from shithole countries? Why do we need more Haitians? Take them out. They all have AIDS.
I thought I was going get this peace prize when I told your prime minister in January that I was sending Norway some F-52 fighter jets. People laughed and said the F-52 only exists in the video game “Call of Duty: Advanced Warfare.” But they aren’t laughing anymore, because we also sent Norway barrels full of Xbox Ones.
You’re going to need those F-52s because there are a lot of bad hombres in Europe. You look at what’s happening last night in Sweden. Sweden, who would believe this? They’re having problems like they never thought possible. Germany is a total mess. Brussels is a hellhole (although, I admit, Belgium is a beautiful city). Have you seen the videos of destructive radical Islamic terrorism in Britain? Paris is no longer Paris.
The haters and the liars say I don’t deserve this award. They make up fake newsabout how I invented the country of Nambia, shoved the prime minister of Montenegro, thought the prime minister of Singapore was from Indonesia, mistookNew Zealand’s prime minister for Justin Trudeau’s wife, called Israel’s Holocaust memorial “so amazing,” admired Brigitte Macron’s body, rewrote the history of Napoleon’s Russia invasion, substituted a porn actress’s name for the British prime minister’s, mixed up the names for China and Taiwan, and had missile talks while guests at Mar-a-Lago listened.
Wrong!
I was, like, really smart, when I made peace with Rocket Man. By calling him short and fat and saying I would totally destroy him with fire and fury from my big and powerful nuclear button, I got him to negotiate. He still hasn’t given up his nuclear weapons, but he has agreed to stop calling me a dotard. In exchange I have agreed not to attack him, and I have given California to North Korea.
I am bringing peace to the rest of the world, too — peace from terrible, horrible and disgusting deals like the Paris accord and the Trans-Pacific Partnership. The world’s shipping lanes are now more peaceful and quiet. Trade wars are good, and easy to win! I might give people peace from other stupid deals: the insane Iran nuclear deal, the terrible Cuba exchange deal, the worst ever Australia refugee deal, bad-joke NAFTA and obsolete NATO. We have also made air travel more peaceful by making sure people from Syria, Iran, Libya, Somalia and Yemen don’t visit America.
On my way to the Nobel Prize, I knocked the hell out of the Islamic State, sent nice, new, smart missiles into Syria and dropped the Mother of All Bombs on Afghanistan. But those are only a tiny, tiny fraction of the countries I could have bombed.
I did not bomb Mexico even though they’re murderers and rapists. I did not bomb Canada, even though they are disgraceful about trade. I didn’t bomb Pakistan, even though they have given us nothing but lies and deceit. I didn’t bomb China, even though they are raping our country. And I have strongly supported the leaders of Turkey, Egypt, Saudi Arabia, the Philippines and Russia, as they promote peace by silencing noisy dissidents.
Your Majesties and Highnesses, people who worked for me once said “do not congratulate!” — but I fired most of them. So come on, get up and applaud. You are so lucky that I gave you that privilege.