After the Great War: Economic Warfare and the Promise of Peace in Paris 1919

Phillip Dehne is Professor of History at St. Joseph's College, New York, USA. He is the author of On the Far Western Front: Britain's First World War in South America (2010). 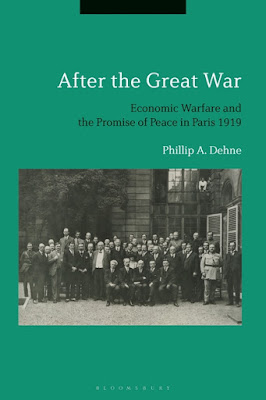 At the Paris Peace Conference of 1919, the international community came together to find a way forward in the aftermath of the First World War. The conference is often judged a failure, as the resulting Treaty of Versailles did not bring long-term peace with Germany. By following the activities of British delegate and wartime Minister of Blockade Lord Robert Cecil, this book examines the struggles and successes of the conference, as delegates from around the world grappled with the economic, political and humanitarian catastrophes overwhelming Europe in 1919.After the Great War describes, for the first time, the significant role of economic warfare at the Peace Conference and in the post-war settlement. Lord Cecil's sometimes difficult partnership with US President Woodrow Wilson forged a new, permanent, international diplomatic organization – the League of Nations – and supplied it with the power to create collective blockades against aggressive states. Leaders of the Allied economic war before the Armistice became, in Paris, leaders of humanitarian-minded international outreach to their former enemies in Germany and Austria.  After the Great War promotes a new understanding of these underappreciated internationalists in Paris, many of whom transitioned into leading the League of Nations even before the Peace Conference ended. Often derided as an idealistic fantasy, international peace enforced by economic sanctions appeared a realistic possibility when the Treaty was signed at the end of June 1919.

List of FiguresIntroduction1. Bringing Baggage to Paris2. Getting down to Business: January3. Fashioning the Covenant: February 1-144. The Lingering Blockade of Germany: February 14 through March5. 'Impending Catastrophe': April6. Taking it to the Big Four: May7. The Various Mentalities of Appeasement: June8. Nurturing the Peace: July OnwardBibliographyIndex

“Phillip Dehne's After the Great War presents a novel interpretation of one of the seminal events of the twentieth century, the Paris Peace Conference in 1919. While much of the voluminous scholarship on the Conference focuses on the major statesmen present in Paris, and on the Conference's apparent failure, “second tier” conference delegates like Lord Robert Cecil demonstrated the internationalist optimism that characterized the multilateral diplomacy of the Peace Conference. This important book connects historians of international diplomacy, international law, and international society, and deserves a wide readership.” –  Daniel Gorman, Professor of History, University of Waterloo, Canada