Can Trump put out the fire he started? 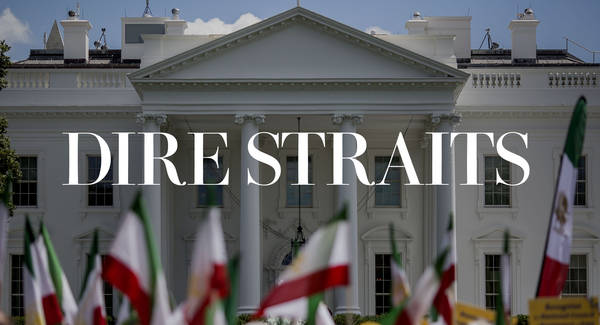 (Zach Gibson/Bloomberg)
It’s a strange thing for leftist doves to find themselves on the same side of an issue as Tucker Carlson. The right-wing Fox News anchor known for his unabashed white nationalism was among the skeptics who privately urged President Trump not to launch a military strike against Iran last week. After Iranian authorities downed a U.S. surveillance drone above the Strait of Hormuz, the White House plotted retaliatory action. Key figures in the administration — chiefly, national security adviser John Bolton and Secretary of State Mike Pompeo — were reportedly keen on hitting back. A plan of attack was put into place.
But on Friday, Trump took to social media and congratulated himself on reining back a U.S. military that was “cocked and loaded” to strike at Iranian targets. Carlson’s thinking — that Trump’s nationalist base is uninterested in, if not wholly opposed to, costly military entanglements abroad — appeared to be on the president’s mind. He suggested the more effective approach would be for the United States to maintain its current pressure campaign on Iran, including slapping on more economic sanctions Monday. (The United States did carry out cyberattacks on Iranian systems last week.)
“I’m getting a lot of praise for what I did. My expression is, ‘We have plenty of time,’ " Trump told reporters Saturday, referring to his decision to halt an attack that would have claimed Iranian lives. “Everyone was saying I’m a warmonger, and now they’re saying I’m a dove, and I say I’m neither. I didn’t like the idea of them unknowingly shooting down an unmanned drone and we killing 150 people.”
Trump also publicly upbraided Bolton for his “tough posture” and hawkish mentality. In private, Trump was said to be complaining about the assembled hard-liners in his inner circle. “These people want to push us into a war, and it’s so disgusting,” Trump told one confidant about his own advisers, according to the Wall Street Journal. “We don’t need any more wars.”
On one count, Trump is right. He is neither a warmonger nor a dove. If Trump had his way, the United States would likely have a smaller military footprint in the Middle East and lean more aggressively on its allies in the Gulf to execute its regional agenda. But for all Trump’s insistence that he is opposed to war, he still is the one who laid the powder for a dangerous flare-up.
The showdown over Iran was just the latest instance of Trump playing both arsonist and fireman. The current state of tensions is a direct consequence of the Trump administration reneging on the terms of the Iranian nuclear deal, reimposing sanctions and enacting other measuresto squeeze the regime in Tehran. All of this was done against the wishes of key U.S. allies in Europe and amid the protestations of much of the foreign policy establishment in Washington.
“Trump’s usual shtick is to paper over the problem of his creation and then declare victory, but this week he added a biblical dimension to the drama-making,” wrote Politico’s Jack Shafer. “First, he assumed the persona of the vengeful god, commanding an attack on Iran in retaliation for its shoot-down of a $200 million Navy surveillance drone. Then he ducked into the wardrobe for a costume change to emerge in the cloak of the Prince of Peace and called off the strike.”
It’s a somewhat unconvincing act, especially as Trump’s hawkish advisers remain on the warpath. Both Bolton and Pompeo journeyed to the Middle East over the weekend, talking tough on Iran and vowing to prevent Tehran from building nuclear weapons — a prospect the U.N.'s atomic agency and the other permanent members of Security Council all believed had been avoided by the nuclear deal Trump rejected.
Bolton appeared in Israel alongside Prime Minister Benjamin Netanyahu, who hailed the “crippling American sanctions” placed on Iran. Pompeo is slated for a whirlwind set of talks about Iran on Monday in Saudi Arabia and the United Arab Emirates, the two Arab monarchies most bent on countering the Islamic Republic.
“Pompeo, who last year issued a list of 12 broad demands for change in Iran, shows no signs of softening his outreach to the Islamic Republic,” wrote my colleague Carol Morello. “He began his travels lashing out at Tehran, belittling its explanation of why it downed a U.S. drone last week as ‘childlike’ and not worthy of belief.”
Pompeo tried to steer Trump toward military action last week, and he retains significant influence within the White House. “In an administration that churns through cabinet members at a dizzying pace, few have survived as long as Pompeo — and none have as much stature, a feat he has achieved through an uncanny ability to read the president’s desires and translate them into policy and public messaging,” noted the New York Times. “He has also taken advantage of a leadership void at the Defense Department, which has gone nearly six months without a confirmed secretary.”
America’s top diplomat also rubbished claims that Trump had sent a message to Iran via a diplomatic backchannel run by Oman. The president says that he is open to talks with the regime in Tehran, but few experts believe this administration is on track to lead Iran to the table.
Seyed Hossein Mousavian, a former spokesman for Iranian nuclear negotiators and a scholar at Princeton University, told the Atlantic that, “by destroying the deal, Trump destroyed confidence and any chance for future negotiations.”
And tensions seem bound to spike again.
“Avoiding further escalation will be difficult, given both sides’ determination not to back down,” Philip Gordon, a former Obama administration official, wrote in Foreign Affairs. “A new nuclear negotiation, which Trump claims to want, would be one way to avoid a clash. But Iran is not likely to enter talks with an administration it does not trust, and even less likely to agree to the sort of far-reaching deal Trump says is necessary.”
Postado por Paulo Roberto de Almeida às 01:12