The New Cambridge History of American Foreign Relations: Volume 3, The Globalizing of America, 1913–1945 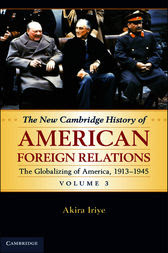 Since their first publication, the four volumes of The Cambridge History of American Foreign Relations have served as the definitive source for the topic, from the colonial period to the Cold War. This third volume of the updated edition describes how the United States became a global power - economically, culturally and militarily - during the period from 1913 to 1945, from the inception of Woodrow Wilson's presidency to the end of the Second World War. The author also discusses global transformations, from the period of the First World War through the 1920s when efforts were made to restore the world economy and to establish a new international order, followed by the disastrous years of depression and war during the 1930s, to the end of the Second World War. Throughout the book, themes of Americanisation of the world and the transformation of the United States provide the background for understanding the emergence of a trans-national world in the second half of the twentieth century.

'A clear overview of American ascendance - cultural, military, and economic - in an era punctuated by war and economic crisis. Iriye's global perspective helps us understand the rise of the United States in the context of wider challenges to European power; his analysis of deglobalizing forces and reglobalizing efforts casts new light on American leadership in this tumultuous time.' Kristin Hoganson, author of Consumers' Imperium: The Global Production of American Domesticity
Postado por Paulo Roberto de Almeida às 02:08