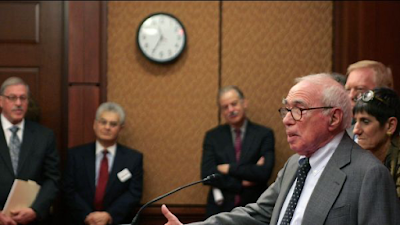 Nicole Gelinas is a City Journal contributing editor, a senior fellow at the Manhattan Institute, and the author of After the Fall: Saving Capitalism from Wall Street—and Washington.
The City Journal, December 19, 2019

Felix Rohatyn—Holocaust survivor, investment banker, U.S. military veteran, and ambassador to France—died Saturday at 91. He lived a remarkable life, escaping Austria and then France as a child and rising to the top of New York’s financial world. He’s most remembered, though, for a public role. In 1975, Governor Hugh Carey tapped him to save New York City from municipal bankruptcy. He ably did that—in large part through financial innovation.
Starting in the 1950s, New York spent beyond its means. Beginning in the mid-sixties, the city began borrowing to paper over gaps between day-to-day revenues (taxes) and day-to-day spending (fire, police, sanitation, education, and, increasingly, social services such as welfare). By the spring of 1975, New York projected a billion-dollar “cash-flow interruption” against $5 billion in annual tax revenues, because the city’s banks were nervous about lending money to an insolvent city and were about to cut off the cash. The city didn’t need money just to fund its current-year deficit; it needed money to refinance the $3 billion in short-term debt it had already incurred. Otherwise, it would default— representing the biggest bankruptcy ever in the world of municipal finance, which investors considered nearly as safe as U.S. Treasury bonds.
To avert a default, the standard story goes, New York State and the federal government stepped in. The feds guaranteed state-issued bonds to save the city. In return for this aid, the state appointed a panel of wise men (and one woman) to oversee the city’s spending. The city embarked on a firm path of fiscal responsibility. New York was saved through fiscal discipline, and went on, starting in the 1980s, to thrive again.
This story is partly true. New York did spend beyond its means, and it did need rescue, and the city’s top financiers and businessmen, led by Rohatyn, engineered that rescue after the political class had failed.
Contrary to the accepted narrative, though, New York never cut back its spending on a sustained basis. Starting in the mid-seventies, the city laid off police, sanitation, education, and other workers, and those cuts contributed to an atmosphere of decline, not resurrection, and helped accelerate population loss. In 1975, Rohatyn even mused of a city where volunteers performed necessary clerical work, though this idea was quickly dismissed. Within a year, Rohatyn realized the error of his logic and sought to avoid more layoffs, which he called “counterproductive.”
In mid-1975, Carey appointed Rohatyn to head a new state entity called the Municipal Assistance Corporation. The new entity, chartered by the state legislature, resembled a traditional public authority, such as the state-run Metropolitan Transportation Authority, but with no real function. It was a shell corporation to raise debt. Lawmakers allowed MAC to raise billions from bond investors by automatically diverting city sales taxes to the state, which would transfer them to MAC. MAC would use this sales-tax revenue to pay the interest on its debt before handing any money left over back to the city. The city, thus, would lose control over a big portion of its own tax revenues (and, through a separate state panel, its budgeting authority). Because of this mechanism, as well as an eventual federal guarantee, investors considered MAC bonds safer than the city’s general-obligation bonds, still paid out of general tax revenues that the city might squander. Rohatyn bought the city time, which, when it comes to refinancing debt, is as good as gold.
In the early eighties, Wall Street took off, and new residents and tax revenues poured in. In 1975, city tax collections totaled $5 billion; by 1985, they had reached $11 billion. Over that critical decade, revenues kept up with the high inflation of the era—no mean feat. New York City invested in better infrastructure, including rebuilding the subways after decades of neglect, and began to reverse the cuts in public services that had plagued the seventies and early eighties. With more disciplined, data-driven policing, among other things, and the rebuilding of deteriorated bridges, the city began using its tax dollars more wisely.
New York was still a high-tax, high-spending city after Rohatyn, but it became better run. Today’s record revenues—$59 billion in major tax revenues in 2018—are more than twice the 1975 total, after accounting for inflation. Today, New York City owes $90 billion, nearly three times the total owed in 1975. Per capita, that’s nearly $11,000 per person, nearly 60 percent more than the runner-up city, Chicago, and more than twice the average of other large cities, according to city comptroller Scott Stringer.
MAC-style structured finance—and the city’s fantastic wealth—keep this carousel going. Even with a near-record population and historic tax revenues, more than $50 billion of New York’s debt is borrowed through nonprofit shell corporations, not through general-obligation bonds. Borrowing through such special-purpose entities lets New York garner higher bond-credit ratings and lower interest rates than more traditional borrowing would allow.
And what of that short-term debt New York borrowed so long ago—its MAC debt? New York never paid it back. In 2004, the state, through a different shell nonprofit, the Sales Tax Asset Receivable Corporation, borrowed $2.5 billion to refinance its remaining 1970s-bailout debt. Peel off layer upon layer of refinancing, and New York still owes that money that it borrowed to make its payrolls in the early 1970s. The long grace period that Felix Rohatyn helped create for New York may not last forever.