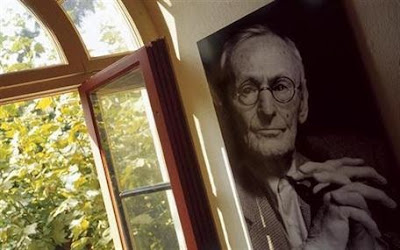 The Museum hosts precious evidence of Hermann Hesse’s last 43 years in Montagnola up until his death.
The small but important Herman Hesse Museum is situated in the Camuzzi Tower, an integral part of the historical ensemble of buildings of the Camuzzi House, a wonderful example of the prestigious work that architects from Ticino carried out in 19th Century Saint Petersburg.
In 1919, when Herman Hesse was forty-two, he rented a modest apartment here. After a period of crisis motivated by the separation from his family and by the terrible consequences that he had foreseen for the first world war, Herman Hesse started writing again and discovered painting as a source of serenity and peace of mind. It is at the Camuzzi House that “Klingor’s Last Summer”, “Siddharta”, “Death and the Lover”, “Steppenwolf” numerous poems and short stories were written and many watercolours painted.
In 1931, Herman Hesse moved with his third wife, Ninon, into the Pink House, in whose garden he took pleasure in growing flowers and vegetables. His creativity was further confirmed by later works such as “Time in the Vegetable Garden” and “Magister Ludi”, for which he was awarded the Nobel Prize for literature in 1946 and “Letters”.
Many important people (among whom Theodor Heuss, Thomas Mann e Bertolt Brecht) came to visit the writer in Montagnola.
Herman Hesse became a Swiss citizen in 1924 and felt very much at home in Montagnola: the incredible landscape and the special conditions of light on the Golden Hill fascinated the artist. To this, we must add, the friendly welcome he received by the people of Ticino whom he continuously praised in his stories. Tolerance, straightforwardness, integrity, farsightedness, these are some of the characteristics that have made him one of the most widely read German writers.
His works have been translated in 54 languages; 100 million copies have been published globally. The Herman Hesse Museum in Montagnola, the first of its kind and the only one in Switzerland, was inaugurated on July 2, 1997 in occasion of the 120th anniversary of the writer’s birth and preserves precious tokens of the last 43 years of life of the artist and painter, who died in Montagnola in 1962.
The museum is a place of encounter for visitors from all over the world. In the video room a documentary is projected in Italian, German and French; books in different languages exhibited at the entrance and in the garden invite one to read and think.
Along the route called “On Herman Hesse’s Footsteps”, one can admire the unique landscape of the Golden Hill.
Postado por Paulo Roberto de Almeida às 12:56