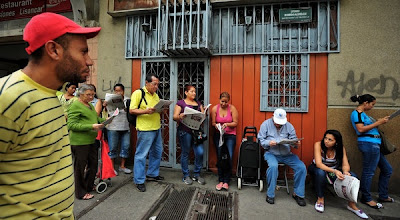 Customers lined up at 6:30 a.m. outside a government-subsidized store in the Santa Rosalía neighborhood for a chance to get whatever groceries were available.

CARACAS, Venezuela — By 6:30 a.m., a full hour and a half before the store would open, about two dozen people were already in line. They waited patiently, not for the latest iPhone, but for something far more basic: groceries.

A version of this article appeared in print on April 21, 2012, on page A1 of the New York edition with the headline: Price Controls Keep Venezuela Cupboards Bare.
Postado por Paulo Roberto de Almeida às 14:18