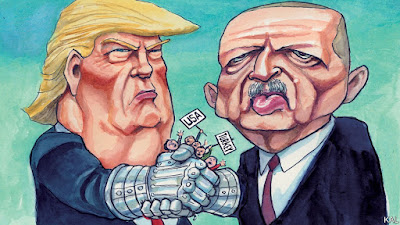 The Trump administration’s corruption and degradation of U.S. foreign policy were on shameful display on both ends of Pennsylvania Avenue on Wednesday.
In the White House, President Trump was fawning over Turkish President Recep Tayyip Erdogan, a vicious anti-American dictator who has ethnically cleansed the Kurds in northern Syria, locked up his domestic critics and established close ties with Russia. “You’re doing a fantastic job for the people of Turkey,” Trump gushed. Of course he did: By Trump’s lights, this is how a leader should behave.
Trump even praised Erdogan for having “a great relationship with the Kurds,” which will come as news to them. The United States reportedly has drone imagery showing atrocities committed against Kurds by pro-Turkish militias in Syria; I’d hate to see how Erdogan treats someone he has a lousy relationship with. Once again Trump put his extraordinary gift for Orwellian doublespeak to use on behalf of an odious autocrat.
In the Longworth House Office Building, meanwhile, the House Intelligence Committee was hearing damning evidence of how Trump had mistreated a democratic ally threatened by another one of his favorite dictators—Vladimir Putin. The facts are incontrovertible: This summer Trump blocked military aid that Ukraine desperately needs to force its government to announce a sham investigation of Joe Biden. Ukraine eventually got its military aid, as Republicans repeatedly pointed out, but this only occurred after the whistleblower came forward. And while Trump did meet Volodymyr Zelensky on the sidelines of the United Nations General Assembly in September, the democratically elected president of Ukraine still has not gotten the kind of White House welcome that the Turkish dictator has twice received.
In recounting this sordid story for a television audience, diplomats George Kent and William B. Taylor Jr. were utterly credible and totally devastating witnesses. They pointed out what an important ally Ukraine is and what a heavy price it paid in the lives of its soldiers when the military aid was withheld.
Republicans were left sputtering about crackpot conspiracy theories that blame Ukraine, not Russia, for 2016 election interference. Even if that’s true (and it’s not, as Kent and Taylor noted), how would that justify Trump soliciting a bribe? The Republicans talked so much nonsense because they could not challenge the damning evidence about Trump’s corruption of U.S. foreign policy.
At one point, committee counsel Daniel Goldman asked Taylor: “Have you ever seen another example of foreign aid conditioned on the personal or political interests of the president of the United States?” “No, Mr. Goldman,” the veteran diplomat testified. “I’ve not.”
But while Trump’s disreputable and dishonorable actions in Ukraine were unprecedented when compared with other presidents, they are utterly routine for this one. Trump recognizes no separation between public and private: He thinks “his” officials are there to serve him, not the U.S. government. He demands personal loyalty even at the cost of violating the law, and when he does not get it, he fires appointees such as James B. Comey as FBI director and Jeff Sessions as attorney general.
Knowing what we now know about how Trump operates, I cannot help but be suspicious of his motives in kissing up to Erdogan. According to NBC News, former national security adviser John Bolton recently said that “he believes there is a personal or business relationship dictating Trump’s position on Turkey because none of his advisers are aligned with him on the issue.”
Trump himself admitted that he has a “little conflict of interest” with Turkey because of the Trump Towers in Istanbul. A New York Times article spells out those conflicts by exposing the cozy links between Trump’s son-in-law and shadow secretary of state, Jared Kushner; Erdogan’s son-in-law and finance minister, Berat Albayrak; and Mehmet Ali Yalcindag, the son-in-law of Trump’s Turkish business partner, Aydin Dogan, who built the Trump Towers Istanbul and still pays Trump for the use of his name.
As a result of their “backdoor diplomacy,” the Times notes, “the Trump administration has balked at aggressively punishing a state-owned Turkish bank for evading American sanctions against Iran” and “also deferred legally mandated sanctions against Turkey, a member of the North Atlantic Treaty Organization, for installing Russian missile defense systems.”
Eric Edelman, a former ambassador to Turkey and undersecretary of defense under President George W. Bush, told the Times that “Trump is replacing formal relations among nations in several cases with family-to-family relationship, or crony-to-crony relationships.”
Whether in Ukraine or Turkey or elsewhere, Trump invariably seeks to cut deals with the most corrupt cronies he can find. Zelensky’s misfortune is that he is trying to fight corruption while Trump is promoting it. Hence Trump’s outrageous attempt at blackmail. Unless Trump is removed from office by either impeachment or election, he will continue to corrupt U.S. foreign policy on a hitherto unimaginable scale.