Alibaba sets its sights on Amazon 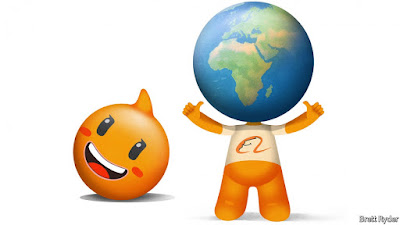 ANYONE WHO is cursed with a rational mind should ponder Alibaba’s faith in eight, the luckiest single digit in China. On November 26th China’s e-commerce juggernaut sold HK$88bn ($11.2bn) of secondary shares on the Hong Kong Stock Exchange under the stock symbol 9988—88 is not only a homonym for baba, but also signifies double luck. As soon as the gong was banged to launch trading, the shares soared from HK$176 to the auspicious price of HK$188. Luck was on Alibaba’s side. Nearby Pedder Street, where 19th-century stockbrokers gathered to trade shares, has been a hotspot of anti-China protests since early summer. On occasion, the smell of tear-gas has wafted into the exchange. Yet after a landslide win for pro-democracy parties in local elections earlier in the week, the chaos has—at least temporarily—subsided.
Luck aside, the listing provides the company with triple benefits. It wins brownie points with the Chinese government for demonstrating confidence in Hong Kong’s financial future amid the protests. It partially hedges its exposure to America, where it launched the biggest initial public offering of all time in 2014, but has recently suffered from trade-war related turbulence. And it increases the accessibility of its shares to Asian institutional investors, who may be less inclined to view China through the prism of trade and geopolitical tensions. Soon it may be eligible for Stock Connect schemes that link Hong Kong with markets in Shanghai and Shenzhen, allowing mainland investors to pile in as well.
In the process, Alibaba has already chalked up one victory. It has shrunk the discount at which its shares have long traded against Hong Kong-listed Tencent, its sworn enemy among China’s internet titans. Its eyes are now on a bigger prize. Alibaba’s executives suggest that the firm should be valued like Amazon, its biggest global e-commerce competitor. Amazon is worth $890bn compared with $520bn for Alibaba. The American firm’s prospective price/earnings ratio, at around 67, is over twice that of its Chinese rival. To narrow the gap Alibaba has a tricky balancing act to pull off. It needs to keep the Chinese government on its side, but also appear less Chinese when winning over the outside world.
Alibaba’s ability to achieve its ambitions should not be underestimated. But even the most bullish analysts say that overtaking Amazon is a long shot. The two firms have different business models. Alibaba provides a platform that links buyers and sellers on its biggest sites, Taobao and Tmall, and it mostly makes money from sellers spending money to push their wares higher up the search rankings. Unlike Amazon, it does not sell its own goods, meaning it has no need for inventory and warehousing. That helps it generate much fatter profit margins. But according to David Dai of Bernstein, a research firm, its cloud-computing business, though the biggest in China, makes a negligible contribution to its valuation. Amazon’s cloud business, Amazon Web Services, is a gold mine, accounting for about half of the American firm’s value. And while Amazon generates over $70bn of annual sales from outside its home market the figure for Alibaba is less than $10bn.
Daniel Zhang, who in September took over running the firm from Jack Ma, its charismatic founder, is trying to transform Alibaba by making better use of its vast trove of data to create more value. Roughly one of every two Chinese buy via its e-commerce platforms. Bolstering it all is Alipay, its online-payments platform with about 900m users in China. Alibaba owns a 33% stake in Ant Financial, Alipay’s parent company, potentially further boosting its appeal to investors.
But for all its clout, it remains at the mercy of the Chinese government. After its listing in New York in 2014, a boom in its share price turned to bust when government regulators publicly tore it off a strip for peddling fakes. As Alipay and Tencent’s Tenpay have muscled into territory controlled by state-owned banks, the government of President Xi Jinping has angrily pushed back. Now regulatory heat is rising over allegations of unfair competition, particularly with regard to “pick-a-side” deals, in which platforms forbid merchants from trading with their rivals. Galanz, a home-appliance-maker, and JD.com, a big e-commerce rival, have recently sued Alibaba’s Tmall for allegedly abusing its market power. In April Colin Huang, founder of Pinduoduo, a $43bn upstart that is nipping at Alibaba’s heels, warned of “forced exclusivity” in e-commerce. Alibaba dismisses the issue as “baseless sensationalisation”. It adds that “committing to a single partner is normal commercial behaviour”. Shortly before Alibaba’s Singles’ Day sales jamboree on November 11th, regulators travelled to its home town of Hangzhou to warn e-commerce firms that such deals were illegal. If they want, they can make life deeply uncomfortable.
Alibaba, for now, appears relaxed about the pressure. It argues that Big Tech in China is hardly a cosy oligopoly. The constant battle between Alibaba, Tencent and others is almost visceral. Yet the importance of remaining in the government’s good books may undercut its efforts to build a global business. It has made inroads in South-East Asia. But analysts doubt its ability to compete strongly with Amazon in Europe and America, especially in cloud services because of concerns about the Chinese government’s access to its data (though much of that belonging to its clients outside China is stored offshore). Even in Hong Kong, it may find itself in an awkward position if anti-China sentiment resurges.

Alibaba has made its own luck. Since its founding 20 years ago, it has battled the Chinese state to get where it is, trounced foreign competition in China and helped revolutionise e-commerce. This year it has responded to onslaughts from the likes of Pinduoduo by upping its e-commerce offerings in China’s hinterland. From a tech point of view, it stands shoulder to shoulder with Amazon. But its valuation shows how steep the China discount remains. If it is truly lucky, the Hong Kong listing may help change that a bit. ■
Postado por Paulo Roberto de Almeida às 19:59