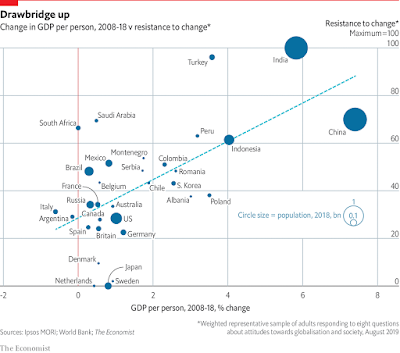 The Economist, Feb 27th 2020
THE PAST decade has been an uncomfortable one for economic liberals. The global financial crisis of 2007-09, and the Great Recession that followed, caused many to question the merits of trade and immigration. Such doubts have given rise to a wave of populist movements across the West, many of which cut across the traditional left-right political divide. In 2016, shortly before Donald Trump was elected America’s 45th president, this newspaper observed that the world appeared to be separating into two distinct groups of people: those who are “open” to change and those who are not. Drawbridge down, or up?
A sweeping new survey by Ipsos MORI, a pollster, sheds some light on precisely where support for pulling up the drawbridge is strongest. In August 2019 Ipsos asked 22,000 adults across 33 countries (a representative sample covering some two-thirds of the world’s population) more than 300 questions about their attitudes towards the world, their country, their community and their own lives. The results suggest that on average, people view globalisation more favourably than they did in the depths of the financial crisis. In the 20 countries surveyed by Ipsos over the past six years, 56% of respondents, on average, think that globalisation is good for their country, up from 49% in 2013.