A Theory of International Organization 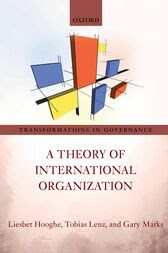 Why do international organizations (IOs) look so different, yet so similar? The possibilities are diverse. Some international organizations have just a few member states, while others span the globe. Some are targeted at a specific problem, while others have policy portfolios as broad as national states. Some are run almost entirely by their member states, while others have independent courts, secretariats, and parliaments.
Variation among international organizationsappears as wide as that among states. This book explains the design and development of international organization in the postwar period. It theorizes that the basic set up of an IO responds to two forces: the functional impetus to tackle problems that spill beyond national borders and a desire forself-rule that can dampen cooperation where transnational community is thin.
The book reveals both the causal power of functionalist pressures and the extent to which nationalism constrains the willingness of member states to engage in incomplete contracting. The implications of postfunctionalist theory for an IO's membership, policy portfolio, contractual specificity, and authoritative competences are tested using annual data for 76 IOs for 1950-2010.
Transformations in Governance is a major academic book series from Oxford University Press. It is designed to accommodate the impressive growth of research in comparative politics, international relations, public policy, federalism, environmental and urban studies concerned with the dispersion of authority from central states up to supranational institutions, down to subnational governments, and side-ways to public-private networks. It brings together work that significantly advancesour understanding of the organization, causes, and consequences of multilevel and complex governance. The series is selective, containing annually a small number of books of exceptionally high quality by leading and emerging scholars.The series targets mainly single-authored or co-authored work, but it is pluralistic in terms of disciplinary specialization, research design, method, and geographical scope. Case studies as well as comparative studies, historical as well as contemporary studies, and studies with a national, regional, or international focus are all central to its aims. Authors use qualitative, quantitative, formal modeling, or mixed methods. A trade mark of the books is that they combine scholarly rigour withreadable prose and an attractive production style.The series is edited by Liesbet Hooghe and Gary Marks of the University of North Carolina, Chapel Hill, and the VU Amsterdam, and Walter Mattli of the University of Oxford.

Deep thinking and theorizing as well as profound and methodologically advanced empirical analysis - if you ask for the impossible and want to have both in one book, this one has it. A Theory of International Organization is at its core about the tension between scale and community. It develops a sophisticated and encompassing set of insights into the working of International Organizations in an interdependent world constituted of (mostly) nationalcommunities. This book is one of the most important contributions to a new wave of theorizing about world politics that overcomes old schisms. It is a must-read for all serious students of International Relations.