The Drama of Brazilian Politics, 1815 to 2015 - Book by Ted Goertzel and Paulo Roberto de Almeida

The Drama of Brazilian Politics: From 1814 to 2015 (English Edition) eBook Kindle 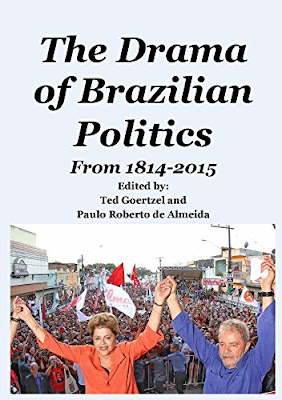 Karl Marx once observed that “all great world-historic facts and personages in world history occur, as it were, twice: the first time as tragedy, the second as farce.” Brazilian history includes several tragedies and a good deal of farce, as well as some heroics, a few mysteries, and a little romance.No Brazilian king, emperor or president has ever been assassinated, but our drama includes one dramatic suicide (Getúlio Vargas in 1954), four leaders who resigned out of frustration or pressed by grave political upheavals (Dom João VI in 1821, Dom Pedro I in 1831, Deodoro da Fonseca in 1891, and Jânio Quadros in 1961), while many others were forced out of office by coups or conspiracies (among them Dom Pedro II in 1889, Washington Luís in 1930, Getúlio Vargas in 1945, and João Goulart in 1964), and one forced from office in an impeachment process (Fernando Collor in 1992). Characters include the world's first sociologist president, Fernando Henrique Cardoso, the world's second labor leader president (after Lech Walesa), Luiz Inácio Lula da Silva, and Brazil's first woman president, Dilma Rousseff. It ends with an exciting electoral struggle in 2014 between Dilma Rousseff and Marina Silva, a woman from the Amazon who fought with the martyred Chico Mendes to defend the environment and the rights of rubber trappers.This book is suitable for students of Latin American history, politics and economics, as well as for journalists, diplomats, activists, business people, or anyone interested in Brazil. It is up-to-date, but also deeply rooted in Brazilian history and in a concern with lasting social problems. The authors vary widely in their ideological and political dispositions, and we have made no effort to homogenize the content. Each essay has a clear authorial voice. The chapters can be read separately, although readers without much familiarity with Brazilian history would probably do best to begin with the first chapter. That chapter, by Ted Goertzel, introduces the fascinating characters who played and are playing the leading roles in the drama of Brazilian politics.The chapters are:1. The Drama of Brazilian Politics: from 1815 to 2015, by Ted Goertzel2.The Politics of Economic Regime Changes in Brazilian History by Paulo Roberto Almeida3.The Brazilian Presidency from the Military Regime to the Workers’ Party by João Paulo M. Peixoto4. A Woman’s Place is in the Presidency: Dilma, Marina and Women’s Representation in Brazil by Farida Jalalzai and Pedro G. dos Santos.5.A Brazilian ex-President’s Public Speech: A Threat to the Existing Order? By Inês Signorini6. Life without Turnstiles by Alipio de Sousa Filho7.The Changing Face of Brazilian Politics by Sue Branford and Jan Rocha8.Political Leadership and Protest in Brazil: The Social Protests of 2013 in Comparative Perspective by Guy Burton9. Presidential Leadership and Regime Change in Brazil with Comparisons to the United States and Spanish America by Ted GoertzelThis book takes advantage of e-book technology to bring the reader a volume that is both timelier and less expensive than traditionally published volumes. We have updated our work to be released at the end of September, 2014, when interest should be high because of the Brazilian presidential election. We also plan to use the e-book technology to update the volume after the elections, and we invite readers to email us with comments and suggestions, as well as with corrections for any errors they may find.