H-Diplo Roundtable XXI-21 on The Final Act: The Helsinki Accords and the Transformation of the Cold War 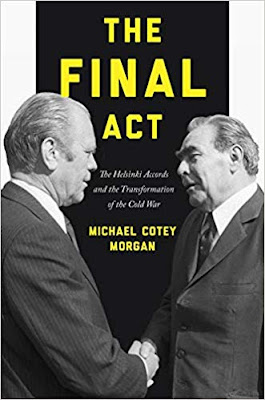 The first in-depth account of the historic diplomatic agreement that served as a blueprint for ending the Cold War
The Helsinki Final Act was a watershed of the Cold War. Signed by thirty-five European and North American leaders at a summit in Finland in the summer of 1975, the agreement presented a vision for peace based on common principles and cooperation across the Iron Curtain. The Final Act is the first in-depth account of the diplomatic saga that produced this historic agreement. Drawing on research in eight countries and multiple languages, this gripping book explains the Final Act’s emergence from the parallel crises of the Soviet bloc and the West during the 1960s, the strategies of the major players, and the conflicting designs for international order that animated the negotiations.
Helsinki had originally been a Soviet idea. But after nearly three years of grinding negotiations, the Final Act reflected liberal democratic ideals more than communist ones. It rejected the Brezhnev Doctrine, provided for German reunification, endorsed human rights as a core principle of international security, committed countries to greater transparency in economic and military affairs, and promoted the freer movement of people and information across borders. Instead of restoring the legitimacy of the Soviet bloc, Helsinki established principles that undermined it.
The definitive history of the origins and legacy of this important agreement, The Final Act shows how it served as a blueprint for ending the Cold War, and how, when that conflict finally came to a close, the great powers established a new international order based on Helsinki’s enduring principles.

Review by Rósa Magnúsdóttir, Aarhus University
The Final Act: The Helsinki Accords and the Transformation of the Cold War is a truly international history of the process that led to the signing of the Helsinki Accords in 1975 and its aftermath.[10] The Helsinki Accords were the outcome of the Conference on Security and Cooperation in Europe (CSCE); in the book, Morgan analyzes the process which was initiated by Soviet leader Leonid Brezhnev, negotiated for almost three years by hundreds of diplomats, and finally signed by thirty-five European, Soviet, and North American heads of state. The Final Act debunks the many myths and simplifications about the Helsinki agreement that have surrounded it since 1975 and is an extremely valuable contribution in the current reevaluation of the late Cold War.
The book is organized chronologically around three main questions: “Why was the CSCE created in the first place? Why did the Final Act take the shape that it did? And how did it influence the Cold War?” (4). Morgan argues that while the CSCE’s significance was underestimated at the time, the Final Act proved very consequential for Europe and its place in the international system, and that the 1975 Helsinki Summit should therefore claim its prominence as the successor to the 1815 Congress of Vienna or the 1919 Paris Peace Conference. This emphasis on the importance of the CSCE and the resulting European order also elevates the West and the role some key Western actors, such as West German Chancellor Willy Brandt, French President Georges Pompidou, and U.S. President Richard Nixon, played in the process but Leonid Brezhnev is also in the midst of the narrative, which takes into account the context of the Cold War.
One of the most astonishing thing about the Helsinki process is how many diverse actors were involved. The dominant actors were the United States and the Soviet Union, but the dividing Iron Curtain did not govern the process. Morgan does a great job of showing how the hundreds of diplomats involved in negotiating the process could advance and retreat at different points in time; indeed it comes out very clearly how diplomatic the process actually was. The preparatory talks took longer than anyone had suspected, with delegations arriving in Geneva in September 1973 and completing their work in July 1975. Chapter 4, “The Meaning of Security,” discusses the workload, bureaucracy, tactics, personalities and brings out “the mixture of tedium and exhilaration that characterized life at the CSCE” (114). The Western media was not very interested in the preparatory talks but the Soviet and Eastern bloc media, as instructed from above, discussed the overall process in a positive light, criticizing the “Western governments for demanding too much” (112). The Soviet delegation in Geneva was by far the largest one, with Anatoly Kovalev leading a team of experienced negotiators who proved themselves to be invested in improved East-West relations. The major negotiators from the Western side often sent junior diplomats, mainly to signal that they “would be prepared to walk away if the Soviets refused to compromise” (113).
By focusing on all the different actors involved, Morgan debunks the myth of the Helsinki Process being solely a bilateral, superpower project. Even if the process and the outcome of the Helsinki agreement greatly influenced the way the Cold War developed, giving the West an upper hand on pretty much “every significant point,” (5) no actor was too small to have a voice in the process; no political culture was by default out of the loop. Of course there were dominant actors, but the detailed descriptions of the actual negotiations make it clear that this was a diplomatic project. Morgan also takes into account the parallel structure of established Cold War organizations, such as NATO and the Warsaw Pact. It was not obvious, especially to the Western leaders, that they should leave disarmament off the agenda for Helsinki, but in the end, Nixon and Brezhnev reached a compromise, which the other leaders accepted even if some felt like it had been a secretive process governed by the superpowers.
Morgan has succeeded in creating an effortless narrative of a complicated international diplomatic process while highlighting its far-reaching importance. The Final Act is based on archival research in eight countries, a long list of published diplomatic documents, interviews, periodicals, and excellent command of the existing historiography. It is hard to imagine a more balanced account; this book is sure to become the standard work of reference for research focusing on topics as varied as human rights, trade relations, activist groups, and international diplomacy in the 1970s and 1980s.