A frase do mes - Will Rogers (e uma biografia)

“Everything is changing. . . . People are taking their comedians seriously and the politicians as a joke.”
Will Rogers

Will Rogers: That’s the guy who never met a man he didn’t like, right? Today, few people know more than that.

But the cowboy comic with the rope tricks was no mere wisecracking rube, Richard D. White Jr. writes in “Will Rogers: A Political Life.” “History has done a disservice to Will Rogers,” White says. “A closer look at whom he met, where he traveled and the subjects of his writings and speeches reveals not so much a comedian but a true political insider with the power to shape public opinion and ultimately influence public policy.” And that closer look is what he gives us in this new biography.

Jon Stewart, Stephen Colbert and Molly Ivins owe a debt to Rogers, as does Rush Limbaugh when he’s actually funny and not just mean. But in his day, Rogers was bigger than all of them. Between his emergence as a performer and his death in an airplane crash in Alaska in 1935, Rogers, a 10th-grade dropout, wrote thousands of closely read newspaper columns and articles, and six books. He starred in dozens of radio broadcasts and 71 movies, and was courted by presidents and legislators.

Or, as Rogers himself put it: “Everything is changing. . . . People are taking their comedians seriously and the politicians as a joke.”

Proving one unelected man’s influence isn’t easy, but White makes a convincing case that Rogers had plenty. He helped build support for Franklin Roosevelt’s New Deal, sometimes performing on the radio just before a fireside chat, and making points so similar to the president’s that a reporter once asked if one of them was writing the other’s material. (Nope, Rogers insisted.) When the Supreme Court struck down New Deal legislation, Rogers criticized the justices as “the nine old gentlemen in the kimonos.” He stumped for government investment in aviation and ridiculed Prohibition relentlessly. In the late 1920s, he warned that Americans were living beyond their means and in the early 1930s that Germany would re-emerge as a military threat.

He could also offend. Though he raised money to help the poor blacks affected by the Mississippi River flood of 1927 and spoke out against the Ku Klux Klan, he provoked outrage when he casually used a racial epithet on the air to refer to Negro spirituals. (The incident led to earnest apologies by Rogers, though in one he delivered yet another slur, explaining that he was raised by “darkies” as a boy in the Oklahoma Indian Territory.) Afflicted with insiderism and an eagerness to please, Rogers could be disarmed with a friendly overture. Criticism of John D. Rockefeller stopped after a visit to his Florida mansion.

And a pleasant conversation with Benito Mussolini turned Rogers into a fan. “I have never yet seen a thing that he has done that wasn’t based on common sense,” he said. White sheepishly admits that Rogers “never met a man he didn’t like, even if he was a dictator.” The Mussolini man-crush so upset James Thurber that he wrote, 23 years after Rogers’s death, that Rogers’s “irresponsible observations” showed that “political satire can be as dangerous as an unguided missile when it is unsound.”

White, a professor of public administration at Louisiana State University and a biographer of Huey Long, commits a single sin in this worthy book: a biography of a famously funny man should be funny. But White seems so intent on getting us to take Rogers seriously that he plays down the humor. Part of the problem, of course, is that we are looking at Rogers across a gulf of decades, and few of his zingers travel well; readers with an allergy to corn pone won’t be charmed by Rogers’s wit. Still, some of the lines sound pretty fresh today.

“I don’t belong to any organized political faith,” he said. “I am a Democrat.”

Outside of a dog, a book is a man's best friend.
Inside a dog, it's too dark to read...

Marx (not Karl, but Groucho)

AKIRA NEMOTO, director of an elderly services office in Japan, on the many centenarians who live only in government files.

Do Blog do Adolfo Sachsida:
"A melhor frase da Copa" 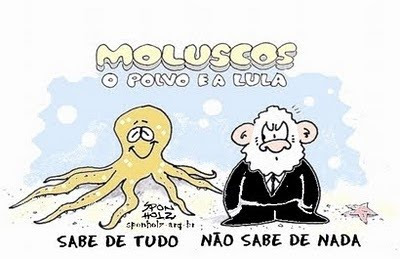